Remembering Alicia Cardenas, Who Made Her Mark on Denver Sol Tribe owner Alicia Cardenas. Jake Cox
Alicia Cardenas, a muralist and trailblazer in Denver's tattoo industry, was killed on Monday, December 27, in a shooting spree that began at her tattoo shop, Sol Tribe, in central Denver and ended in Lakewood; five people, including the suspect, were dead by the end of the night. Cardenas leaves behind a twelve-year-old child and countless friends and fans.

Named one of Westword's People to Watch in 2021, Cardenas opened her first shop, Twisted Sol, in 1997 in the Capitol Hill neighborhood; she opened Sol Tribe at 56 Broadway in 2008. She was known for her spiritual take on tattooing, branding, piercing and other body modifications, as well as for building an inclusive space that was considered almost revolutionary in the ’90s. Cardenas was an instructor for the National Safety Council for twenty years, teaching classes about bloodborne pathogens, and served on the board of directors for the Association of Professional Piercers. Her tattoos speak to her eye for detail, with intricate stippling and line work, a Caravaggio-esque grasp of depth in her grayscale, and perfect use of symmetry and application of sacred geometry.

Her tattoos were already highly coveted when Cardenas started making a name for herself with street art that paid homage to her indigenous heritage and studies in anthropology with detailed use of iconography and social commentary themes; she worked first with Crush Walls and then Babe Walls.

In addition to her incredible artistic creations and deep knowledge of body modification, she held a passion for volunteering and anthropological studies, as well discussing ancient rituals and collecting archaeological objects.

Just a little over a week ago, Cardenas talked with Westword about tattooing in Denver, which she said is filled with "friends from different walks of life who are trying to support each other." Even over the phone, her playful and healing demeanor shone through, while her strength in storytelling made it clear that she was a force, determined to make a difference and even out the industry's playing field.
click to enlarge 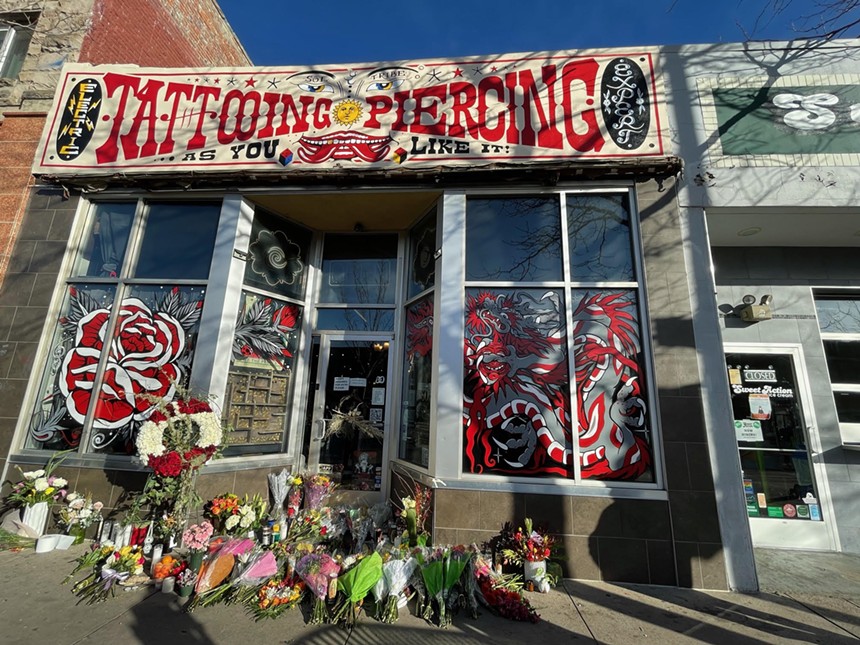 Flowers and candles are being placed outside Sol Tribe in honor of Alicia Cardenas.
Catie Cheshire
"It’s a white male-dominated industry," she said. "We come from a tough line of characters. ... It has been tough, and it makes you tough."

Cardenas was certainly tough, and she made strides in ensuring that the industry was more welcoming and inclusive, as well as more respectful toward the art form's indigenous roots. Sol Tribe, she said, is for anyone and everyone.

"I have been building my tattoo shop vision since day one about making a space that was more inclusive and more friendly to different walks of life, the queer community — taking it out of the biker, prisoner sort of realm and getting it into a space where anyone who wanted to could walk in and get a good tattoo and feel comfortable," she said.

“And that’s really what it’s about," she continued. "Taking it out of this history of bad behavior that’s undeniable when you have a whole industry born off people who come out of prison or who have embraced this alternative lifestyle — there’s gonna be drugs and misogyny and abuse. But the part where it’s been reborn, where people who are nonbinary have a voice — that’s been going on for a while, that’s been manifesting and switching and evolving for at least the last 25 years.”
click to enlarge

Tattoo of long-time friend and client Jeremy Marquez’s original art.
Alicia Cardenas Instagram
Cardenas had an undeniable role in that evolution, but always remained humble in our conversation. She gave repeated nods to the "long lineage of women in this town who have been running tattoo shops for thirty years." She spoke of Sister Bear, who owns Blue Door; Mickie Kott, who owned Tattooing by Mickie; Barbara Chapman, who ran the legendary artist Peter Tat-2's shops; and more.

Cardenas said she made an effort to “rewrite the apprenticeship model” at her shop, so that apprentices could be paid and more people of color could get a chance in the industry. She said she was taking her ideas to other shops as well, even more traditional ones, because she believed in bringing every type of tattoo artist into the dialogue.

"The apprenticeship model said for many years that you had to work for free for two years and be a slave and be hazed and do all this grunt work and labor and be somebody's cleaning lady and take their car to get fucking washed, and someday you'll make $150 an hour," she said. “People of color don’t have that option to do things for free for years before they get a job.”
click to enlarge

A Crush Walls 2020 mural by Alicia Cardenas.
Kyle Harris
Cardenas started tattooing when she was sixteen, then began working at Bound by Design in the early ’90s. Her road to ownership was anything but easy. "There was still biker affiliation involved with shops," she recalled. "Everybody is artsy-fartsy now and can do whatever the fuck they want. ... It is not where it used to be."

When she opened Twisted Sol in her mid-twenties, Cardenas remembered, she wanted to create a more artful and comfortable environment for both clients and artists.

"In the late '90s, we decided that we were gonna do shops with no flash on the walls — we were going to take it into this new, artsy realm," she explained. "We were just going to do only our own art and draw things for people instead of making them choose things off the wall. And with that, we also wanted to bring more of a marriage of body piercing and tattooing together. ... It was in the late ’90s that we rebirthed shops that had more to them, more stories — I would say the modern primitives, the tribal aspect that we were more culturally respectful. We were talking about doing things for other reasons than being a rebel or being sexual. We explored all the subcultures of people we could have as clients. It was no longer about if you weren't cool enough or tattooed enough. You wouldn't walk into the shop and be scared away; you were welcomed in."

Some tattooing traditions are likely here to stay, she said, even if they are fading as quickly as a lip tattoo. She spoke of the importance of respect in the industry, including giving shops a heads-up before moving your own shop down the street. "Those types of things are really lost in this coming age," she said. "Part of integrity is about knowing where you fall in it all and having a good understanding of who all is around you." Artists Victor J. Escobedo (from left), Alicia Cardenas and Marco Antonio Garcia in front of their collaborative piece "Xipe Totec."
Anthony Maes
Cardenas celebrated new shops that are more inclusive and considered safe spaces, like her own. But she also said that for the tattoo industry to be considered truly inclusive, that means also recognizing "the good ol' boys' clubs," or more traditional tattoo parlors. She considered some of those shop owners close friends in the community, people she could call on for anything.

"Maybe it's because I'm almost fifty, but it doesn't bother me, because people need what they need from tattoo shops," she said. "Magic happens in those studios, too."

Cardenas made her own magic. "Yeah, we're all a little bit of a mess about how we came into this industry," she admitted. "But we're here now and we're doing the work, and it's very important for us to acknowledge that there are people who paved the way. ... It would behoove us as a community to be more community-oriented."

Cardenas leaves behind a legacy of commitment to community and full-scale inclusion; she made an indelible mark on Denver's tattoo and body-modification industry, as well as her friends' and family's lives.

"I don't want the tattoo industry to be framed as negative anymore," she concluded. "Yes, we should know our history, but it's really different now."

Alyssa Gunn-Maldonado was also shot to death at Sol Tribe; her husband, Jimmy Maldonado, worked there; he was shot and is currently in a hospital ICU. After the shootings at Sol Tribe, the gunman made a few more stops in Denver, killing Michael Swinyard at an apartment complex at 1200 Williams Street, before heading to Lakewood, where he went to Lucky 13 Tattoo. There he shot and killed employee Danny Scofield before moving on to Hyatt House, where he shot clerk Sarah Steck, who subsequently passed away. A Lakewood police officer shot and killed the gunman, identified as Lynden McLeod.

A GoFundMe page has been set up in support of the family of Alicia Cardenas here. A GoFundMe page  in support of the Gunn-Maldonado family can be found here.
KEEP WESTWORD FREE... Since we started Westword, it has been defined as the free, independent voice of Denver, and we'd like to keep it that way. With local media under siege, it's more important than ever for us to rally support behind funding our local journalism. You can help by participating in our "I Support" program, allowing us to keep offering readers access to our incisive coverage of local news, food and culture with no paywalls.
Make a one-time donation today for as little as $1.
Emily Ferguson is Westword's Culture Editor, covering Denver's flourishing arts and music scene. Before landing this position, she worked as an editor at local and national political publications and held some odd jobs suited to her odd personality, including selling grilled cheese sandwiches at music festivals and performing with fire. Emily also writes on the arts for the Wall Street Journal and is an oil painter in her free time.
Contact: Emily Ferguson