Sarah Romanowsky on the lyra (consider this a sneak preview of one of her Toward the Light showcase performances). Randm Vision
No one at the nineteenth International Aerial Dance Festival seems to be afraid of heights. At Frequent Flyers' Boulder studio, dancers dangle from an arm wrapped in swaths of fabric or hang upside down, practicing a swift unfurling movement that will drop them onto the thick blue mats below.

Aerial dance, says festival founder Nancy Smith, is "anything that gets you off the ground dancing." Imagine a cross between the soaring acrobatics of Cirque du Soleil, the Peter Pan flying on Broadway and the storytelling of modern dance, all requiring immense core and upper-body strength. People don't realize, Smith says, "how hard it actually is, since the aesthetic is effortlessness."


Compared to ballet, which has its origins in French courts in the fifteenth century, aerial dance is in its infancy. Smith would know; she literally wrote the textbook on the history of aerial dance. The art form began in the twilight of the 1960s, pushed along by experimental choreographers like Alwin Nikolais, Terry Sendgraff and Stephanie Evanitsky, who began taking modern dance off the ground with the aid of various apparatuses.

Smith vividly remembers her introduction to aerial dance. While in Seattle to visit Joan Skinner's American Contemporary Dance Company, with which she had formerly danced, Smith watched a rehearsal for co-artistic director Bob Davidson's upcoming work. The piece involved a single-point trapeze. "The second I saw [it], I said...that," Smith recalls, pointing to an invisible trapeze. Enchanted by the three-dimensional canvas created by midair dance, Smith "locked [herself] in a studio eight months" and experimented with movement. In 1988, she founded Frequent Flyers, an aerial dance company, in Boulder.

Since then, Smith has seen aerial dance evolve rapidly. When she started working with the trapeze, she was one of twelve dancers in the U.S. to do so. Now, classes in all forms of aerial dance have popped up across the country, especially in Boulder and San Francisco, evolving as it is influenced by other performance disciplines. 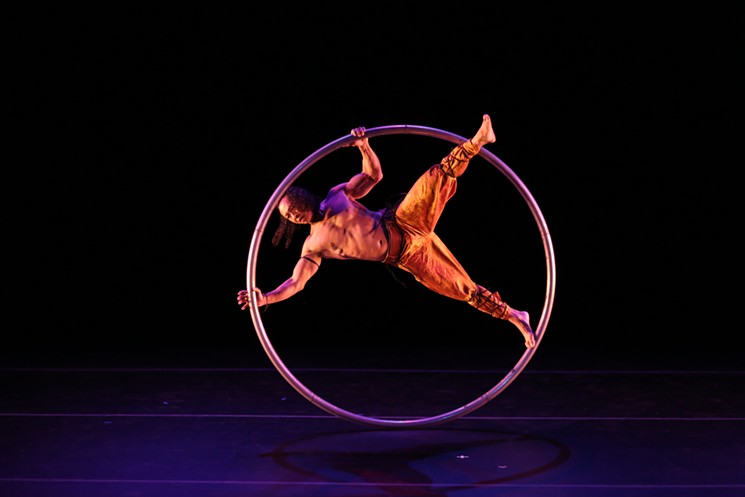 Sam Tribble uses the cyr wheel.
Nina Reed Photography
And aerial dance isn't restricted to just the single-point dance trapeze. Most widespread are aerial silks, made of jewel-toned synthetic fabrics that dancers twist around their limbs or torsos, and lyra, in which dancers thread themselves through a hoop suspended from the ceiling. Other performers use a loop of aerial silk called a sling; the cyr wheel, a rolling hoop that spans nearly six feet in diameter; or a vertical rope known as a corde lisse that puts the vine-swinging antics of Tarzan to shame.

Despite the complex physics of such equipment, Frequent Flyers classes make aerial dance accessible to beginners. Smith says her students come with a variety of movement experience — rock climbing, dance, circus, gymnastics — or none at all. Her studio offers a series of classes for adults, as well as the High Flyers teen company and the Kids Who Fly program to empower at-risk youth and a nine-month professional training course. And, of course, there's the twelve-person professional company, which recently performed at the Kennedy Center, spiraling above the Boulder Philharmonic as it played Aaron Copland's Appalachian Spring.

You do not, Smith explains firmly, perform gravity-defying stunts on your first foray into aerial dance. You start by building upper-body and core strength, learning to safely wrap, grip and climb fabric. You begin to invert and figure out the body-baffling challenge of orienting yourself upside down. Besides, "stunts" or "tricks" would be the wrong words for an art that focuses not on making the audience suck in their breath in fear of a fall, but rather on intentional, compelling movement. At Frequent Flyers, they teach "vocabulary" and draw upon the metaphor of building a sentence and then stringing sequences into a paragraph.

While aerial vocabulary differs, like dialect, between different regions and practices, Smith names a few things that are taught in Boulder. In the Lion in the Tree, you recline on the trapeze bar. In Gazelle, your head points to the floor, one or both legs bent. The nature-naming theme continues with the arching shape of Banana.

Aerial silks hang from sturdy rigs at one of the studios at Frequent Flyers Aerial Dance in south Boulder.
Nancy Smith
The nearly 200 attendees at the International Dance Festival, which Smith founded with the late Glenn P. Davis to unite the aerial dance community, are by no means newbies. Some have traveled from as far as Australia to take a plethora of master classes, from Thai massage to handstands, and to see the Toward the Light showcase performance. They line the hallway before a 3 p.m. lyra class taught by Sarah Romanowsky, who's performed with Cirque du Soleil.

After warm-ups, a few dancers take to the lyra rigged with carabiners and industrial round construction slings. They're rated for two tons; Frequent Flyers isn't messing around when it comes to safety. A large part of their teaching centers on assessing your level of physical exhaustion and other safe practices for high-flying movement.

In class, Romanowsky calls up individualized feedback to the six dancers on the lyra, as other dancers, like some of the High Flyer teens and a woman with deep blue hair and galaxy leggings, watch from the ground. Then they rotate. "Legs together," Romanowsky says as someone practices a beat, swinging down from the hoop and then using momentum to pinch at the waist and swing back into a seated position. It's a full-body workout. Later, Romanowsky offers someone rosin, the pine-derived sticky substance used on violin strings, to help with grip.

In the studio next door, everyone wears leggings or long pants so they won't get rope burn from the 25-foot-long corde lisse. Teo Spencer, a member of Pilobolus (a modern dance company famed for surprising, fluid weight-bearing), explains what students should focus on as he dangles by one arm, upside down, eight feet in the air. 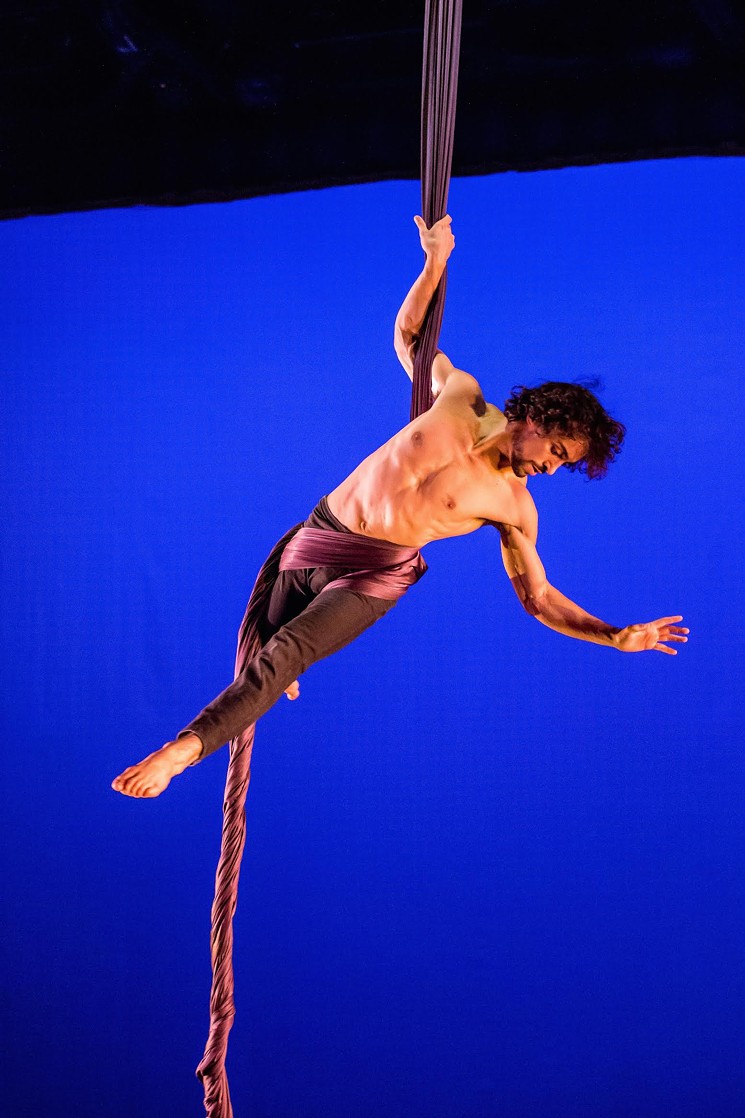 Teo Spencer of Pilobolus performs with aerial silks.
Nina Reed Photography
This weekend, a showcase performance at the Dairy Arts Center, 2950 Walnut Street in Boulder, will mark the festival's halfway point by bringing together top-notch performers in a variety of styles. Spencer and Romanowsky will perform, as will the Frequent Flyers company. After the festival hubbub dies down, Smith will stay busy with late August open houses and samplers, August 24-26, and then a November performance with hip-hop dancers from Block 1750 and the band Chimney Choir.

If you want to witness gravity-defying grace yourself, the Toward the Light showcase will take place at 8 p.m. on Friday, August 4, and Saturday, August 5, as well as at 2 p.m. on August 5-6. Tickets, available for purchase online, are $24 to $28. For more information about Frequent Flyers' classes, programs and the International Aerial Dance Festival, visit Frequent Flyers online.