The displacement of Denver's creative community in the wake of the Ghost Ship fire and increased housing costs propelled the collaborative venture helmed by Denver Community Planning and Development, committee chair Paul Kashmann explained, also noting that safety and gentrification have been ongoing issues in this city since long before the Oakland fire. But the issue came to a head after the shutdown of veteran DIY venues Rhinoceropolis and Glob.

The Safe Occupancy Plan, as outlined by Denver Community Planning and Development Executive Director Brad Buchanan, would amend the Denver building and fire codes to allow the city to issue conditional certificates of occupancy to tenants or owners working or living in un-permitted places who have voluntarily enrolled in the program, allowing them to remain in their space as they work to find an affordable solution to bringing their buildings up to fire code.

After the owner or tenant of such an unpermitted space comes forward, the first step would be a safety inspection. If the Denver Fire Department deems something a "serious hazard," the remedy would require "immediacy," according to Manny Almaguire, a DFD representative involved in drafting the proposal. But in less drastic situations, tenants or owners of a variety of spaces would be able to work with the city to create a renovation plan.

Denver Arts & Venues is compiling a list of designers and architects willing to work pro bono or at discounted rates. Tenants or owners would then have 270 days, or longer if their situations require, to enact their plans. The program would offer a two-year enrollment window for non-compliant spaces built before July 21, 2017. However, the plan's protection would not extend to occupants in spaces where inspections or complaints reveal unauthorized work not previously disclosed or if uses don't align with zoning code.

Buchanan said the city modeled the Safe Occupancy Plan after the EPA's Audit Policy, which asked businesses to disclose and then work with the agency to resolve breaches of federal environmental law. He touted the plan to issue conditional certificates of occupancy as possibly the "first of its kind in the country."

The bottom line, according to Buchanan: finding "rational, reasonable, authentic ways of getting to that safety" for a variety of spaces including but not limited to DIY venues. He acknowledged that the program will take work. Although he stated that the city values artists as "storytellers" and "truth tellers," he also said the project requires "a slow building of trust" between the city and the DIY communities. 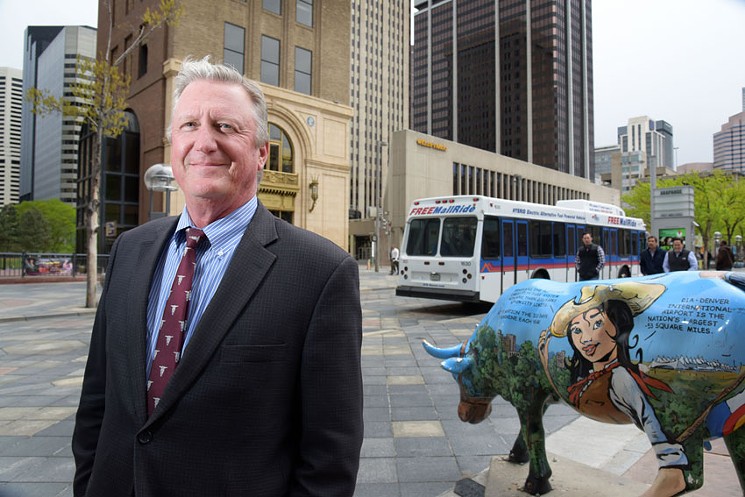 But in advance of the June 28 meeting, Amplify Arts Denver, a coalition founded in the wake of the December DIY venue closures, sent out a press release detailing concerns not with the plan's general thrust but with what the group calls "deeply flawed" details, such as the potential for eviction and fuzzy definitions on terms. (See the Amplify Arts release here.)

Although he lauded the spirit of the ordinance, Kashmann said the idea that landlords could use non-complaint spaces enrolled in the program as grounds for eviction "gave me pause," and read aloud Amplify Arts Denver's suggestion of a ninety-day buffer period for tenants in case of eviction.

Rhinoceropolis' eviction notice.
Bree Davies
Although Amplify Arts Denver had encouraged artists and community members to attend the council meeting, the only members of the public who spoke before the committee were Josh Comfort, a member of the Denver Commission on Cultural Affairs who's also a consultant on the Rhinoceropolis and Glob renovation plans, and Jamie Licko, president of the RiNo Arts District. Both voiced strong support for the Safe Occupancy Plan.

Kim Shively, an organizer for Amplify Arts Denver, wasn't able to attend the meeting. Despite recognizing some of the plan's positive points, most community members she's spoken with tell her that "This isn't going to help us," she says.

At the meeting, DCP deputy director Jill Jennings Golich, who would have a liaison role in guiding community members through the Safe Occupancy Plan process, predicted that "in most situations, it's owner and tenant working together." But Shively expresses less optimism. "I wish there were more cool landlords in the world, but...it seems like there's not that many left," she says.

Council members voted unanimously to move the Safe Occupancy Plan forward; it will move to the full council on July 10 and a final vote on July 17. But the conversation will continue in the meantime. For example, Kashmann mentioned that he wanted to include the perspectives of other impacted parties — in particular, a landlord and tenant — during the public hearing that precedes the final vote.

Right before the committee vote, as he seconded the motion to move the proposal forward, Denver City Council President Albus Brooks reminded the room: "In this age of gentrification, preservation should be our focus."