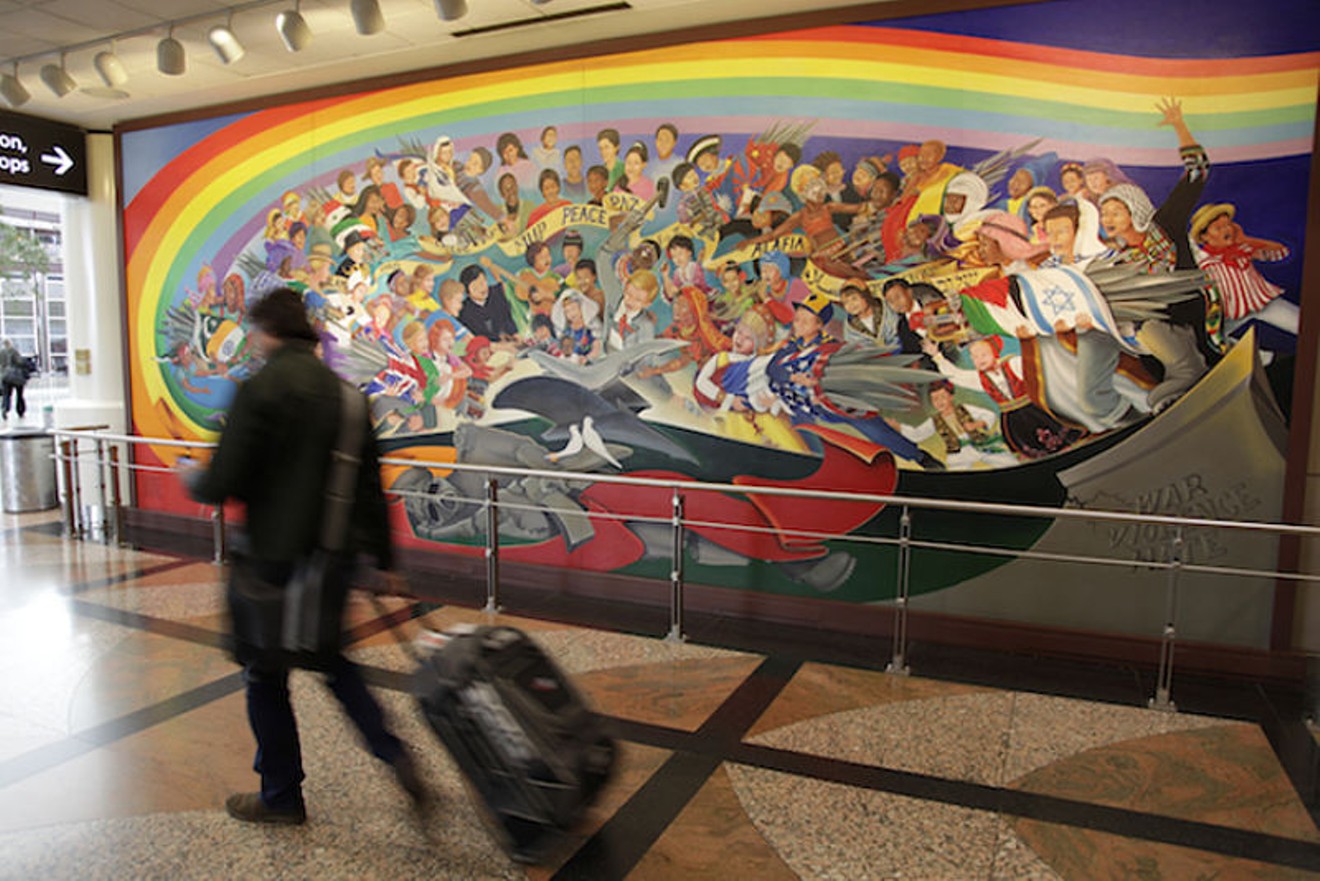 A mutant swarm of theories started swirling around the airport even before it opened in 1995, tying the facility to everything from Martians to an underground concentration camp to the New World Order. But then, the group planning a big launch party (before the airport failed to launch on time) was named the "New World Airport Commission."

Today, several of the public-art pieces at the airport have dark backstories. There are those gargoyles guarding the baggage-claim area, where a failed automated system was one of the reasons for the delayed opening; sculptor Luis Jiménez was killed when a piece broke off the work he was hurrying to complete (also years behind schedule): "Mustang," aka Blucifer, the devil horse that now stands at the entrance to DIA.

But the rumors about Tanguma's work are certainly the darkest, filled with theories about war and pestilence and outright extermination.

Tanguma doesn't get it. Like many painters trained in the Mexican style of mural art, he gears his work to the street and all of its elements, everyone from businessmen and college professors to people like his parents; the last thing he wants is for viewers to mistake his meaning. "The most recurrent theme in my numerous murals across the years has been the struggle for human liberation and human dignity. My work has been totally open in the midst of many people, accessible to everyone," Tanguma writes in "Regarding the DIA Conspiracy Theories," a piece on christiansocialnetwork.net.

But that openness hasn't persuaded closed-minded conspiracy theorists. Back in 1994, Tanguma was working on "Children of the World Dream of Peace" in his west Denver studio when a van full of people pulled up. "They asked a lot of questions," he told Westword writer Jared Jacang Maher in 2007, when Westword published "DIA Conspiracies Take Off," the bible on the topic. "And I explained it like I explain it to everybody," the artist said. The first part of the environmental mural is about the ways that humans destroy nature and themselves through destruction and genocide. The second part is about humanity coming together to rehabilitate nature and revive their own compassion. The travelers weren't convinced.

And now the most notorious piece of art at the airport has disappeared. 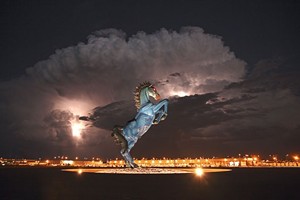 The evil "Mustang" communing with the devil.
flydenver
But the explanation is simple...if you believe it. "We started temporary removals of art in Jeppesen Terminal in advance of the Great Hall Project, which really gets under way in July," says Jimmy Luthye, who's handling communications for the project. "Earlier this week, a team of experts from Ship Art-Terry Dowd moved the southern portion of 'America, Why I Love Her,' by Gary Sweeney, and 'Children of the World Dream of Peace,' by Leo Tanguma. These are being moved to a secure, clean and climate-controlled fine-art storage facility."

Eventually, all of the public art in Jeppesen Terminal will be moved and stored for the duration of the Great Hall renovation. Next to disappear: “Experimental Aviation,” by Patty Ortiz (those great airplanes flying overhead as you exit the train), “Balustrade,” by Betty Woodman, and “Notre Denver,” by Terry Allen. Yes, that's the gargoyle piece.

The moves have been coordinated closely with the artists, Luthye says, as well as the Denver Commission on Cultural Affairs. And when the project is done, at the end of 2021, all of the pieces (except the floor by Jaune Quick-to-See Smith and Ken Iwamasa, which was deaccessioned because it cannot be salvaged after construction) will return...though they'll all be in new homes, some in the terminal, some elsewhere in the airport.

If you believe...
KEEP WESTWORD FREE... Since we started Westword, it has been defined as the free, independent voice of Denver, and we'd like to keep it that way. With local media under siege, it's more important than ever for us to rally support behind funding our local journalism. You can help by participating in our "I Support" program, allowing us to keep offering readers access to our incisive coverage of local news, food and culture with no paywalls.
Make a one-time donation today for as little as $1.