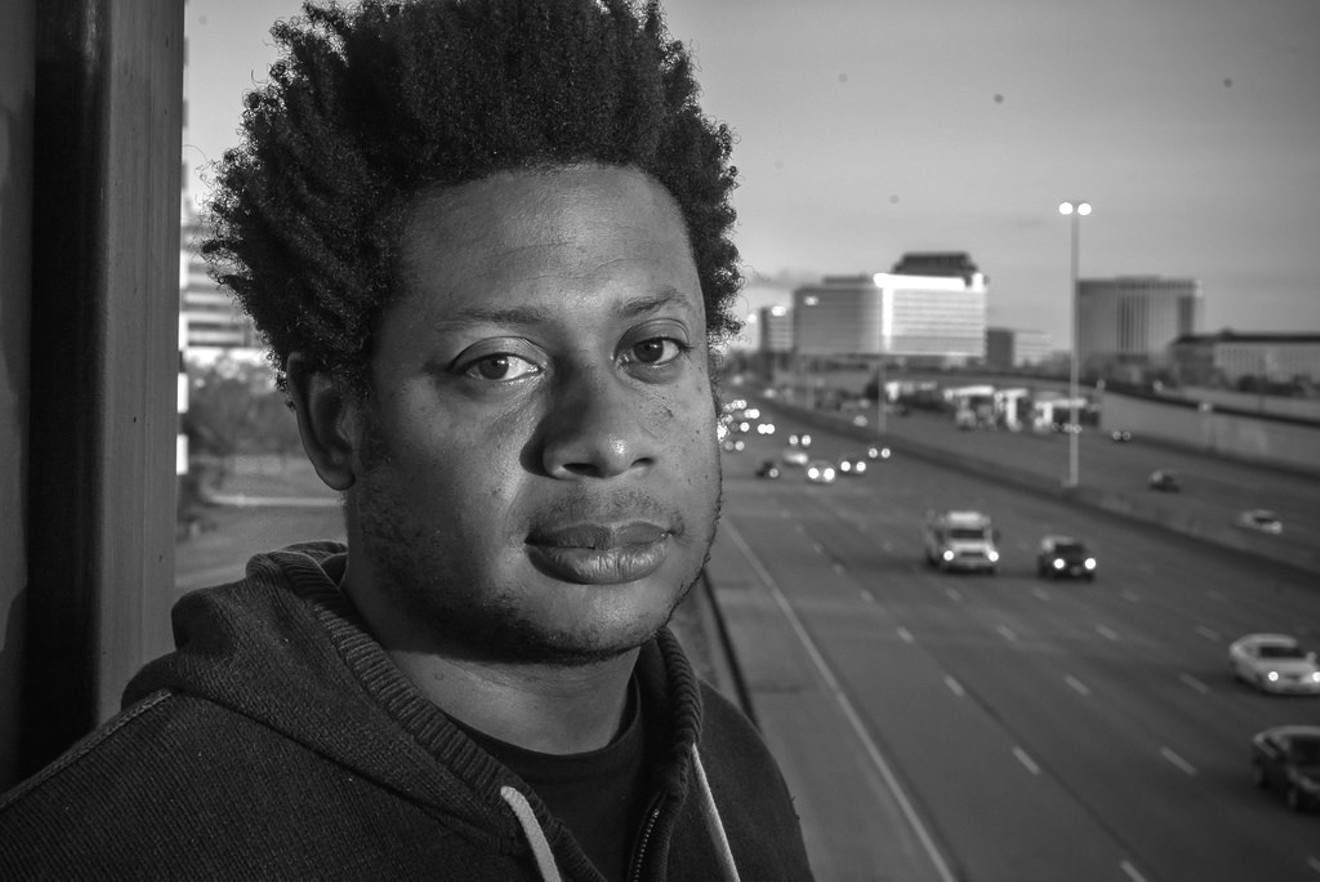 West Virginian Steven Dunn landed in Denver after ten years in the Navy, where, between drills, he was bitten by the lit bug and decided to become a writer. That led him to study creative writing at the University of
Denver, and he’s now the author of an acclaimed small-press novel, Potted Meat, with more on the way. When he isn’t at work at the keyboard, he’s out in the community, participating in readings and leading one of his own: The Art of Storytelling, a monthly event aimed at showcasing Denver’s writers and poets of color. Dunn has no qualms about seeking equity and change in the creative-writing community in this respect, and he speaks out, loudly, about it in his answers to the 100CC questionnaire.

Tarpaulin Sky Press
Westword: What (or who) is your creative muse?

Steven Dunn: Right now (and in some ways all the time), it’s OutKast, because me and my longtime friend, poet Lorenzo James, are working on a collaborative novel based on their album Aquemini. Sometimes rap albums are more dynamic when structured like novels (with chapters and reoccurring characters), so we’re wondering if a novel can be more dynamic if structured like a rap album (with featured artists and interludes that often tell a side story or serve as a transition).

I’d invite the novelist and professor Katie Jean Shinkle, Ol’ Dirty Bastard and my fifteen-year-old daughter. Katie Jean and I'd laugh like hell and have wild conversations about ODB’s album Nigga Please. I’ve had similar conversations with my daughter about the same album. My daughter and I also have a shared love of Katie Jean’s books, Our Prayers After the Fire and The Arson People. Katie Jean is also a fan of my daughter’s paintings.

Tarpaulin Sky Press
Are trends worth following? What’s one trend in literature that you love and one that you hate?

I don’t know if trends are worth following. I tend to think not, but I’m sure there are great exceptions. I’m not sure if this is trendy, but I think it’s definitely more acceptable to write fractured narratives. If that’s a trend, yes, follow it! As long as it’s a sincere engagement.

A trend I hate (this is related to my previous answer about the local creative community): I think in Denver there is a trend for artists/reading series to follow gentrification. It’s not always intentional, though. But I think we want our events/spaces to be “successful,” so we may have them in a “central location,” or we may be feeling artsy and hip or whatever, so let’s create a space in an up-and-coming neighborhood or one of the many new breweries. I’ve been guilty of this, too, but as an artist who creates spaces (temporary and permanent), I wanna have a better social imagination and awareness of what I’m doing. I know businesses owned by people of color are being pushed out of Denver, and I know people spend money at the businesses where the readings are held, so let’s try to create spaces where that money and presence could possibly help. I’m afraid Welton Street Cafe in Five Points will be replaced by another white-owned brewery.

1. To have both of my kids enter adulthood not fucked up from bad parenting.
2. Visit Russia when it’s at its most Russia: in February.
3. Move out of the U.S. to a country with cold weather and socialism.
4. Convince my two sisters to live wherever I live. (I’m being selfish.)
5. Keep writing books. 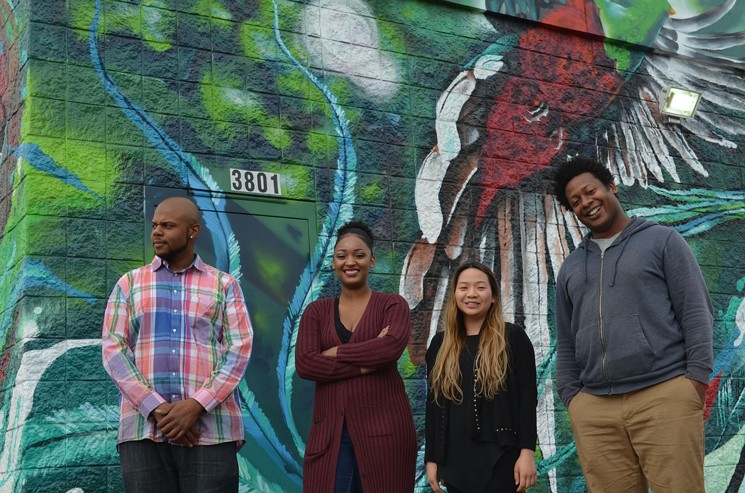 From the third to fifth grade, I wrote a book over and over about a dragon who ran away from home (in London) and met a boy named Lorenzo, and all they did was fly around the world getting drunk in bars. I only knew of moonshine and Wild Irish Rose at that age, so even in China and Djibouti, Draggy and Lorenzo ordered moonshine and Wild Irish Rose. Whenever they flew to the next country, Draggy would be drunk, and it felt like riding a rollercoaster. One time they flew to North Dakota and drank moonshine with the rapper Biz Markie. I thought North Dakota named its capital, Bismarck, after Biz Markie, so it made sense to me that Biz Markie lived in North Dakota, and that the video for “Just a Friend” was filmed in Bismarck.

At eighteen, I ran away from home to the Navy and actually met a dude named Lorenzo (see above), and over the last thirteen years we’ve become brothers and creative partners. I like to think that writing that story over and over conjured the outside world or made me want to see the outside world. Plus, it made my geography skills on point. Running away from home at eighteen was the start of a whole bunch of good shit.

I like Denver a lot less now because of all of the stuff I mentioned above. The city is getting expensive, and people of color are being pushed out. I know that’s the story of every city in America, so you can’t really escape it. But we are here to stay, because my daughter loves her high school and friends. My wife has a great job and friends.

Khadijah Queen
Who is your favorite Colorado Creative?

The poet/teacher/Ph.D.candidate Khadijah Queen. Her fifth book, I’m So Fine: A List of Famous Men & What I Had On came out earlier this year, and I can’t get enough of hearing her read from it and reading it myself. Another writer, Erika T. Wurth, whose fourth book, Buckskin Cocaine (about the seedy underworld of Native American film), just came out. Not only is she a badass writer, but she is publicly honest about being a woman of color in the publishing world. Also the visual artist Satya Wimbish, who transforms dumpster dumps into art. (I Googled her name to hyperlink her website and just found out she was on the Colorado Creatives in 2013.) She is very community-minded as a person and artist.

Finish applying and hoping to get accepted to grad school for an MFA in Creative Writing. Teach my daughter how to drive. Travel to a few more states to read from my first novel, Potted Meat. And prepare for my second novel, water & power, to be published next spring.

Ahja Fox, a poet who recently graduated from Arapahoe Community College and is starting to read more in town. I joke that she is the woman Morgan Freeman because she has a mellifluous voice combined with sometimes painful poems. She’s also our co-host at the Art of Storytelling [reading series] and works hard to interview our featured readers.