Review: DragOn at the Garner Galleria Is Absolutely Fabulous 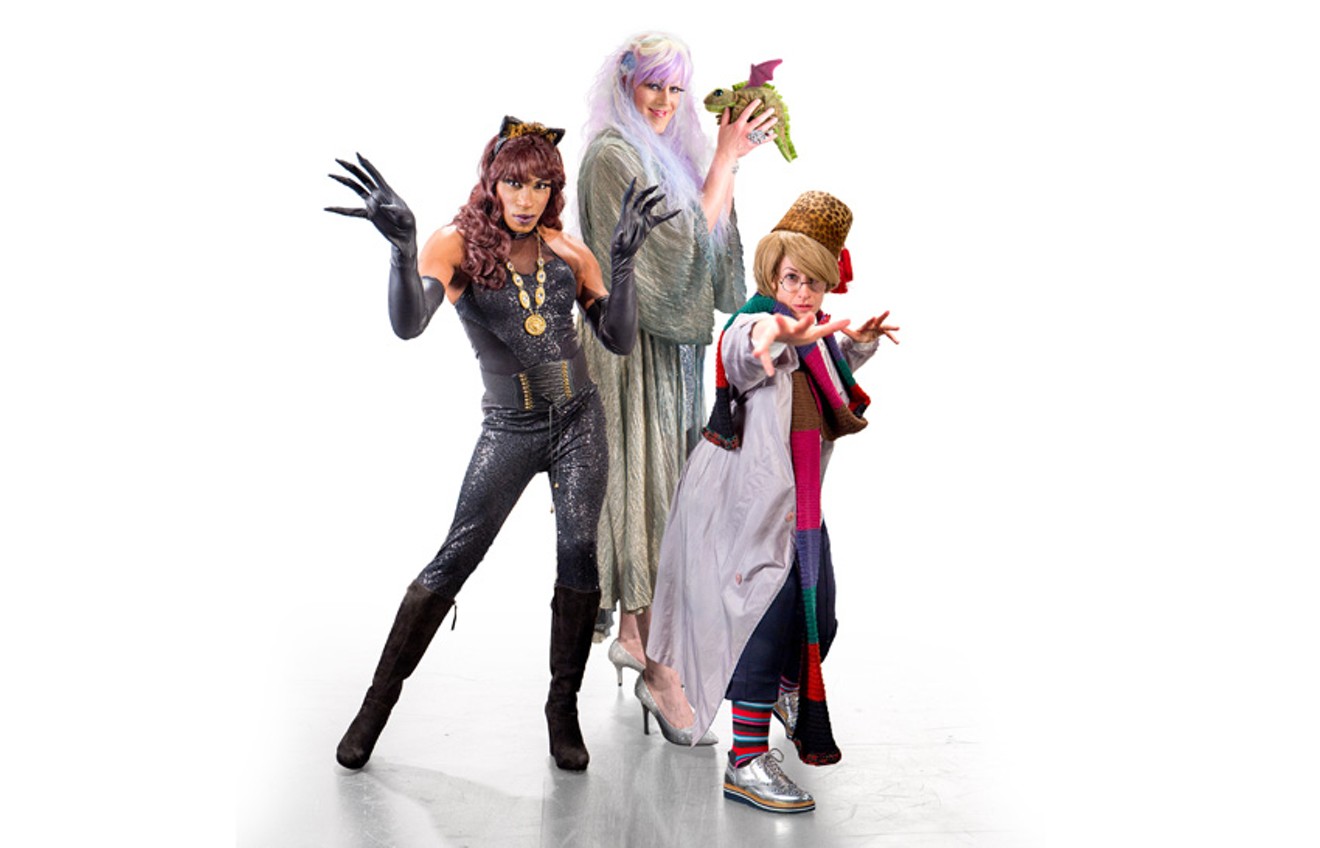 Tyrell D. Rae, Stuart Sanks and Heather Hughes in DragOn. Adams VisCom
There’s only one word that can sum up DragOn at the Garner Galleria, even if that word is a cliché: Fabulous.

Fabulous in the usual sense of glam, over the top, beats all expectations. Which this production does, because the performances are killer, the atmosphere bubbles over, and the audience participation is exactly right.The divas know not only how to cut loose, but how to exert control so that people can yell, clap and laugh all they want without getting obnoxious. But “fabulous” is also the right word because if you go to the root — fable, myth, legend — you’re touching the show’s essence.

For this world premiere, writer and professional nerd Jessica Austgen came up with the idea of linking the spirit of a drag show to that of Comic Con. We’ve known that fantasy and sci-fi are hugely influenced by myth and legend since Obi-Wan Kenobi advised Luke to use the Force in the original Star Wars. In DragOn, it’s called the Fierce. The production is perfectly timed: PrideFest holds court in Civic Center Park June 17 and 18, and Denver Comic Con will fill the Colorado Convention Center from June 30 through July 2.

DragOn isn’t just a sequence of acts; it has a story. Slumming around in her apartment, sharing pizza slices with a greedy rat, Bobbi Brooklyn doesn’t know she’s the chosen one (hello, Buffy!) destined to sit on the Glitter Throne of the diva-verse — not until the Mother of Drag (who looks suspiciously like the Mother of Dragons in Game of Thrones) arrives to tell her. Poor Bobbi doesn’t seem very regal. She’s a clumsy, naive teen who doesn’t even know how to strut. But Mother senses the strength of the Fierce within her, and so begins an odyssey during which Bobbi encounters Catwoman, Wonder Woman, Princess Leia and the Doctor. “Doctor Who?” she inquires innocently. There’s also a Gatekeeper who’s been ruined by the deadly Beige. Along the way, Bobbi is coached on how to dress, spin, shimmy and — most important — believe in her own divinity.

What elevates this evening beyond mere silliness — though it is very silly — is dialogue that’s self-knowing and smart: Austgen’s heart is completely in this, you can tell. The choreography and direction by Joel Ferrell are terrific, too. The music, cleverly chosen and eclectic, consists of bits and snippets for the divas to lip-synch to rather than full numbers; it gets your heart pumping and your spirits soaring. And then there are the divas. Stuart Sanks plays the Mother of Drag with dignified power; this is a woman who knows how to bend others to her will, and also how to hold a stage. Limber, powerful Reace Daniel is Storm, and a slightly shy Wonder Woman.
Anthony Adu creates a great impression of a sweet, somewhat dopey but charming teenager without making Bobbi an outright caricature. Ironically, Heather Hughes, the sole woman in the cast, plays the two male roles: Doctor Who and the Gatekeeper. She’s a brave soul to work with these over-the-top figures who also tower over her physically, but she performs with cheerful and effective confidence. I could have watched Tyrell D. Rae glide across the stage as Catwoman — dangerous and controlled, periodically extending a long, slow claw — all night long. And do not mess with Rae’s Princess Leia.

Some time back, I watched an episode of RuPaul’s Drag Race in which a group of young women who thought themselves unattractive and had trouble getting dates were coached, each by her own drag queen, and given tips on how to dress, stand and walk. During the intimate chat that began the process, one of these women confided a painful memory: She had once summoned up the courage to reach out to a man she liked with a carefully composed note. He never responded. The drag queen leaned forward, eyes full of compassion, and said very softly, “What a pity that poor boy never learned to read.”

Unlike some drag shows, which focus on envy and competition, DragOn presents an image of women that’s playful, confident and strong. And without spouting tiresome truisms about female solidarity, all of these very different divas eventually unite as one to help young Bobbi reach her throne.

DragOn, presented by the Denver Center for the Performing Arts Off-Center through June 25 at the Garner Galleria Theatre, Denver Performing Arts Complex, 303-893-4100, denvercenter.org.