For Tom Edwards, it came out all right in the end.

The Evergreen potter who'd spent a year and a half fretting over the theft of his farting unicorn design will be getting a settlement from Tesla CEO Elon Musk. "There were some misunderstandings that led to this escalating," Edwards posted on his website late last week, "but I’m just glad that everything has been cleared up."

The details of the settlement hammered out by Edwards's lawyer and the Tesla attorneys are confidential, but late July 20, Musk tweeted Edwards's "Copyright Issue: Resolved!" post to his 22 million-plus followers and added his own triple emoji message: a unicorn, a blowing-wind figure and a peace sign.

Musk's Twitter followers, many of whom had commented on the bizarre farting unicorn saga, were quick to add their toot cents.

Said one: "...And Elon saw the unicorn farteth, and he said 'let there be peace'."

Another advised Musk: "Umm maybe go away for a bit." 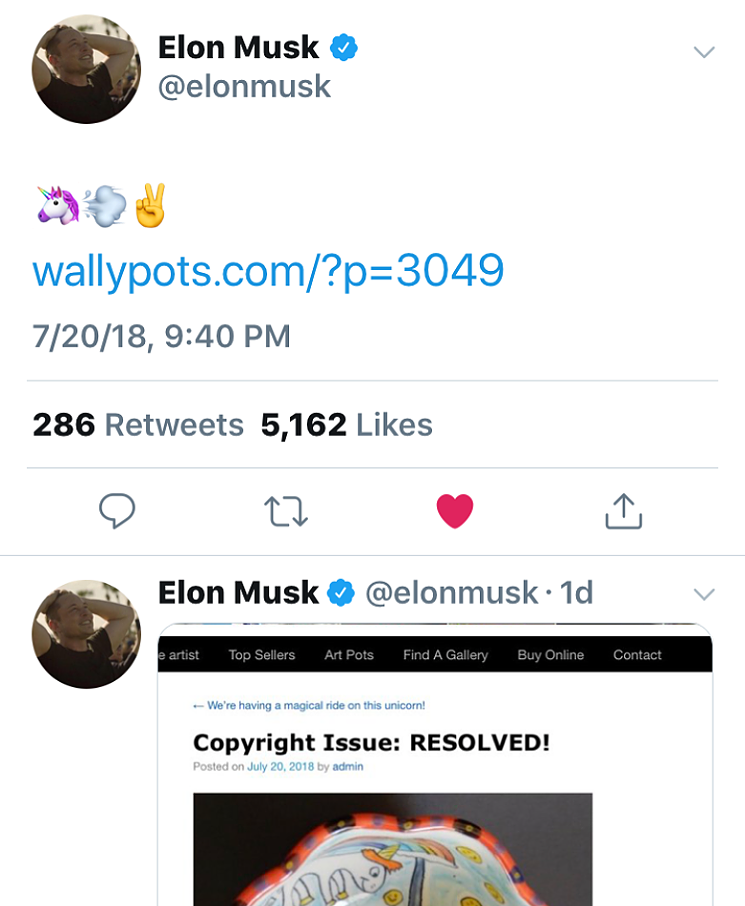 https://twitter.com/elonmusk
The ride started in February 2017, when Musk tweeted a picture of Edwards's farting unicorn mug, a design dating from 2010 that shows the animal's gas powering an electric car, with the message that it was "maybe my favorite mug ever."

Two months later, the artist was shocked to see that an exact copy of his whimsical design was suddenly part of every Tesla's operating system. That December, it popped up on the dashboard of the vehicles in the company's Christmas message.

In June, Edwards finally hired an attorney to fight for his artistic rights. Together they sent the Tesla boss a letter noting that they weren't asking for an "outrageous monetary demand," but a "mutual decision to value the past and continuing use of the image...." But Musk and his attorneys ignored that letter. 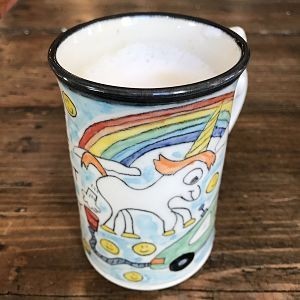 The farting unicorn mug.
Tom Edwards
After Westword published the first story about the pilfered unicorn image on June 26, Edwards's daughter Robin, a musician who goes by the name Lisa Prank, chastised Musk in a tweet. In response,  Musk replied that legal action would be "kinda lame" and said that his interest in her father's farting unicorn had "increased his mug sales."

Those tweets have since disappeared, but it would be harder to erase other recent Musk actions.

After first pronouncing that he was going to have his SpaceX project invent a mini sub to save the twelve Thai boys stuck in a cave, Musk tweet-labeled a British diver who saved the boys a "pedo guy." Then came the revelation that the celebrity CEO had donated to the Republican Party, which seemed to contradict all the climate-change-fighting ideals on which Tesla was built. And rumors of problems with delivery of the Model 3 Tesla continue to emerge.

In contrast, settling the farting unicorn kerfuffle was relatively easy, and the controversy is blowing over.

After forty years of throwing pots, Edwards has gained a new cult following and some cool opportunities.

He's been commissioned to paint a huge mural of the now famous farting unicorn for a Los Angeles art program that serves children in underserved areas. Arts Bridging the Gap’s LA Street Art Initiative wants Edwards to do a giant version of the image.

"They approached me last week about doing a unicorn mural possibly in Hawthorne, CA, near SpaceX headquarters," Edwards reports on his website. "I grew up in this part of Los Angeles, and my father and stepfather both worked in aerospace and defense industries in this very neighborhood. I’m excited about designing a happy, fun work of art for the community."

Which includes SpaceX employees who'll be driving past the piece every day, seeing this reminder of the power of art...and a farting unicorn.
KEEP WESTWORD FREE... Since we started Westword, it has been defined as the free, independent voice of Denver, and we'd like to keep it that way. With local media under siege, it's more important than ever for us to rally support behind funding our local journalism. You can help by participating in our "I Support" program, allowing us to keep offering readers access to our incisive coverage of local news, food and culture with no paywalls.
Make a one-time donation today for as little as $1.