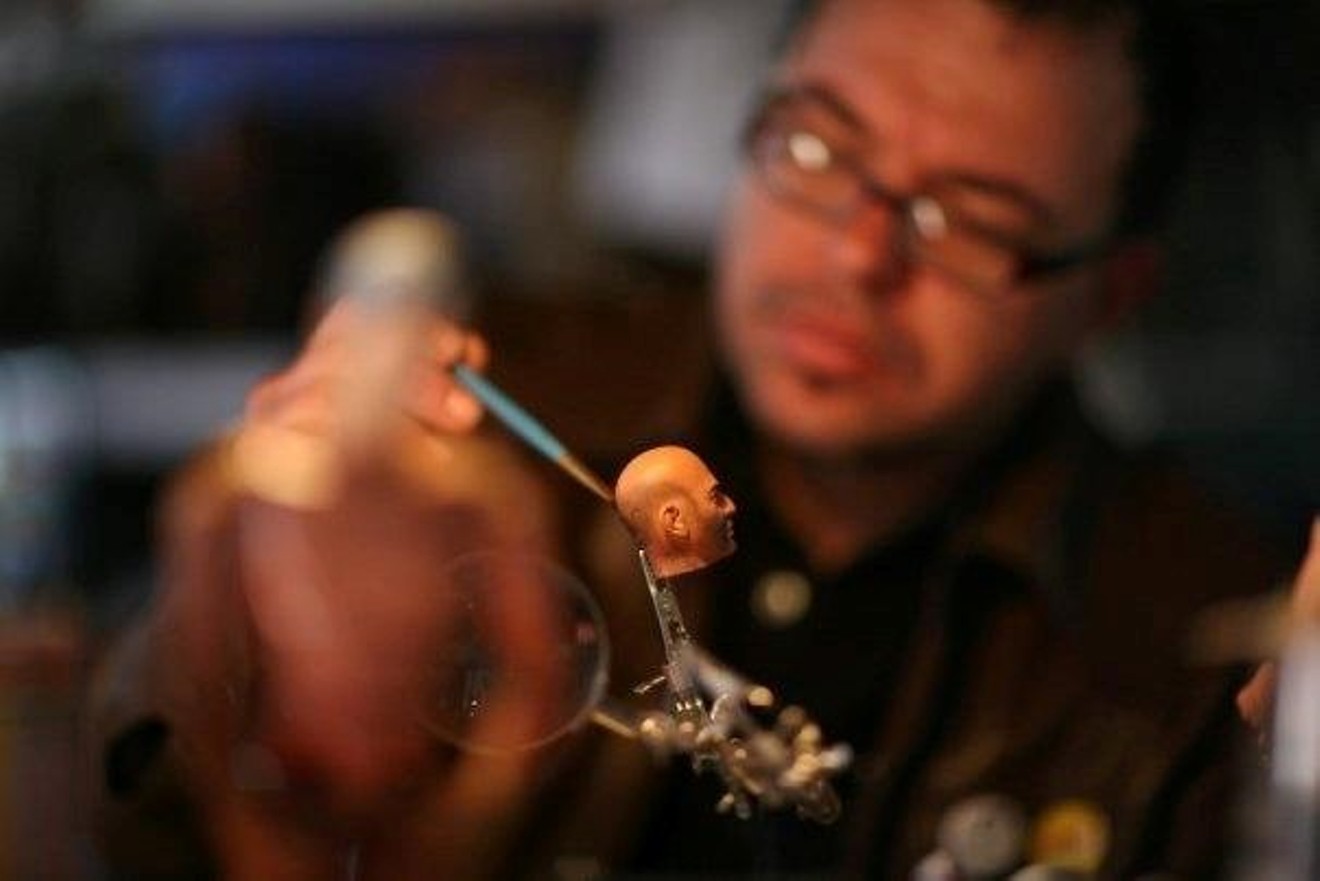 The GI Joe Fest has been forced to change its name. Brian Carney
Multinational toy manufacturer Hasbro recently sent a cease-and-desist letter to Denver's own Gio Toninelo, demanding that he change the name of his thirteen-year-old GI Joe Stop Motion Film Festival, an annual Denver-based event that showcases the best homemade GI Joe movies from around the world. The next iteration was slated to take place in Denver in September, and then tour.

Toninelo, a commercial video producer who runs the festival at a financial loss as a hobby, says he is hesitant to go to battle against Hasbro, so he's renaming the event the Action Figure Film Festival.

He was first contacted by Hasbro in 2010, after the New York Times published an article about the festival.  After Toninelo discussed intellectual property concerns with a company spokesman, he was allowed to proceed.

Then in May, Mike Fletcher of Hasbro reached out to Toninelo, asking him to hand over his books and perhaps formalize a partnership between the festival and the company, he says. While the producer did start discussions with Hasbro, on June 22 the company sent a cease-and-desist letter asking him to quit using the GI Joe brand, markings and other Hasbro intellectual property. (Fletcher has not responded to Westword's requests for comment.)

Toninelo speculates that the company threw down the gauntlet in part because the content he screens is rife with adult language and violence, garnering the screenings what he calls "a PG-17 rating."

While Toninelo has been a GI Joe fan since childhood, he is not entirely disappointed that he has to abandon the name. Now, he says, he can program films starring Marvel and D.C. comic characters in cahoots with GI Joe and other figurines, "a big mashup" that fits within his interpretation of copyright law and fair-use doctrine. A still from the 1979 film Cosmos 1999 L'Enjeu, by Canadian filmmakers Sylvain Labrosse and Yves Lapointe.
Cosmos 1999 L'Enjeu
"I love GI Joe more than any of the other stuff, but I feel a little relieved," Toninelo admits. "It’s such a niche, and Hasbro has been dropping the ball on making action figures, and the new movies suck."

As a consequence of Hasbro's diminishing output, filmmaker fans of the brand are also decreasing. "People just aren’t making as many films anymore," says Toninelo, who adds that he has had to go through back catalogues to fill out his lineup.

With the release of Snake Eyes, a GI Joe spinoff that Paramount announced this spring, "I assume there will be some new toys," Toninelo notes. "But if it’s anything like the last film, you might as well throw them in the trash. They’re terrible."

Despite the naming setback, Toninelo is looking forward to the Action Figure Film Festival, set for September 27 at the Bug Theatre. "We’re going to go forward, and I’m sticking with the dates," he says. "We’re going to push this, and we’re going to tour next year. Let’s move forward."
KEEP WESTWORD FREE... Since we started Westword, it has been defined as the free, independent voice of Denver, and we'd like to keep it that way. With local media under siege, it's more important than ever for us to rally support behind funding our local journalism. You can help by participating in our "I Support" program, allowing us to keep offering readers access to our incisive coverage of local news, food and culture with no paywalls.
Make a one-time donation today for as little as $1.