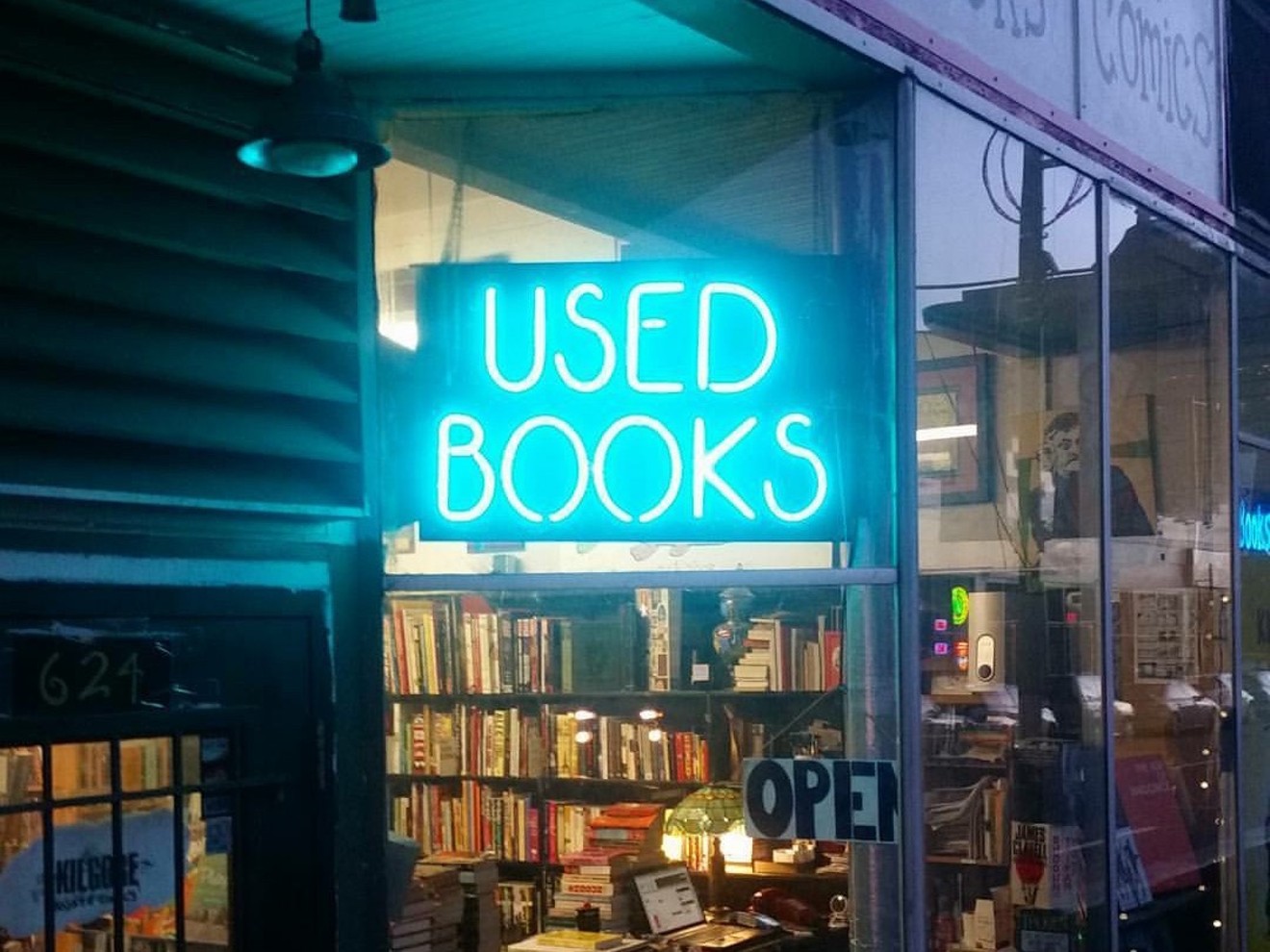 Fans of Kilgore Books & Comics love it just the way it's always been. Courtesy of John Kuebler
Kilgore Books & Comics celebrates ten years this month as an independent bookstore on the gritty block of East 13th Avenue that it shares with Wax Trax Records, but part of its success — much like that of the legendary record store — lies in the way it hasn’t changed much over the past decade. The brick-and-mortar brainstorm of former Capitol Hill roommates Luke Janes and Dan Stafford, the store opened in June of 2008, becoming a quietly curated hangout for Denver’s comic and zine communities. It’s survived changes in the neighborhood and a near-seamless change in ownership without a blip because it’s perfect the way it is, as well as an entrenched example of what’s fondly called “old Denver” these days: small, not fancy, friendly, really good.

On the occasion of Kilgore’s tenth anniversary, friends and owners past (Janes and Stafford) and present (former employee and book lover John Kuebler) will gather this weekend for a laid-back open house and celebration. We caught up with Stafford, who now solely runs Kilgore’s publishing arm out of Washington, D.C., and Kuebler for a firsthand look at how and where things are going. 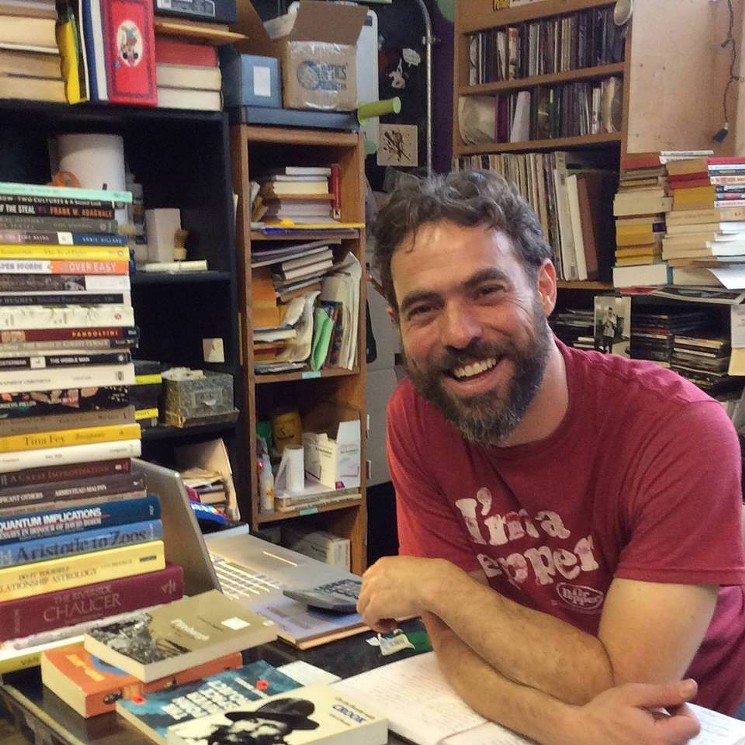 New owner John Kuebler smiles over the counter at Kilgore Books.
Courtesy of John Kuebler
Westword: Can you give me a history of Kilgore in a nutshell?

Dan Stafford: I was living in Denver in Capitol Hill. Luke and I were roommates, and at the time, he worked at Capitol Hill Books. One night we were out on the porch drinking beer, enjoying Denver and discussing our life aspirations and dreams. Both of us were interested in opening a used book store. Denver is already a great book city, so we knew that if we were going to do it, we had to look for a niche not being quite met by all the others. I came from a nonprofit background and did not care too much about money.

We thought about comics, and the zine and punk DIY communities — Denver was sorely lacking on that front. This was a time when Mutiny, formerly Ichabod’s, had just opened with a different owner, and the Denver Zine Library had closed down. There was a real absence of DIY press culture in Denver. I’d go to the Tattered Cover and tell them they should carry more of that stuff, but they would just say that no one’s interested in it.

So we agreed on it and spent the next two, two and a half years buying books. We filled our entire garage with books, and realized it was time for us to find a space.

The space on 13th used to be Across the Tracks space, which had closed down. The owner had wanted to run a bike-repair shop and sell dollar records on the side, but it didn't do well — it was really just a crazy man’s junk shop. We pestered Duane about renting it. It’s the perfect space. We loved the space, but the Wax Trax guys
kept putting us off, so we found another space on the 16th Street Mall. It was bigger and more expensive, but our house was full of books, and we had to do something.

We cleaned out the store, and there were some good things that came of that effort: My wife still rides one of bikes we got out of there. Fahrenheit Books on Broadway had just moved, so we bought some bookshelves from them and built the rest. Luke and I spent sixteen, seventeen hours a day for a month setting up.

How long has it been since you went full-time with the publishing end and sold the store to John?

Officially, about two years ago. When we first did publishing, it started as an accident. Our friend the comic artist Noah Van Sciver was paying more to print each copy of his books than we were giving him for sales — they cost three dollars to print, and we were paying him 50 percent of the profit.

It was a matter of economics. I told him, “You're a great artist, but you have no idea what you're doing. Let us print for you.” This was around 2009, 2010. After that, Luke and I both did the publishing until I moved to D.C. Then he ran the store, and I ran the publishing. Then Luke moved to Michigan, just outside Detroit. He’s opening a new store there, and I guess he’s replicating what we did here. He has another house full of books — it’s so eerie whenever I talk to him about it.

The bottom line is that deal with Duane. Kilgore never would have lasted if that hadn’t happened, and it helped that Duane used to be a book reviewer for the Rocky Mountain News.

Yeah, every day. Noah and Luke and I all see each other and talk in various incarnations, and we always get wistful for the good old days. But the thing we’re forgetting is that none of us made any money. We didn't care.

I miss Denver, I miss Kilgore, but I also moved to D.C. and had two kids, and that’s been good. At the time I left, people were wondering if we’d had a falling out. But we were fine. Luke and I had a rule that Kilgore wouldn't ever tie us down. If it was not fulfilling anymore, we shouldn't do it anymore. We sometimes had dreams of expanding, combining the store with the publishing, with a print shop in back, but those dreams were dashed by the reality of the space. 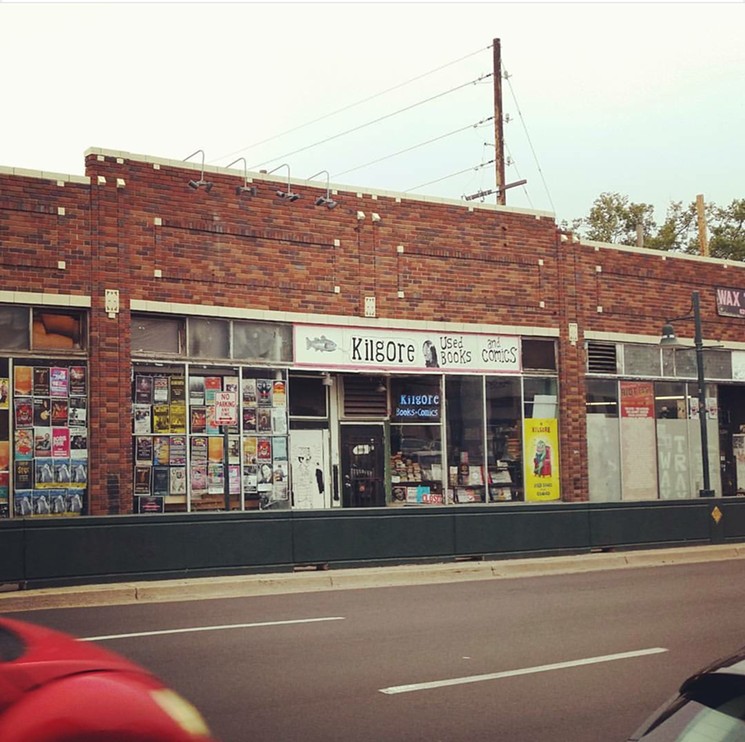 Traffic on East 13th Avenue flies by Kilgore Books.
Courtesy of John Kuebler
Westword: What was it about Kilgore, John, that made you feel like buying it from Dan and Luke would be a good idea?

John Kuebler: I started coming in as a customer not too long after they opened the place. I liked the shop and eventually started to spend a lot of time hanging out and talking books with the guys.

A couple years after I started going there, Dan invited me to work there. It turned into a part-time gig, one or two days a week, and eventually, I starting buying books for them at library sales, running events like the Cowtown Comics Fest, and I even edited a couple issues of the Kilgore Quarterly. When Dan moved away, I started helping Luke more. And when Luke moved, he first asked if I wanted to manage the store for them, so I said, “What would you think about selling it to me instead?” That’s how it was done.

The idea of working for myself was a godsend. I’d been going to used book stores since I was seven, eight years old, and I’ve always been a book lover. It’s been a long journey for me.

And do you have any regrets?

No, not at all. It’s been wonderful. The only thing is that I won’t ever be able to go back to working for someone else. I’d just have to go set up a table in the park or sell books out of the back of a van.

Has Kilgore in the present fulfilled your original dreams for the store?

Dan Stafford: 100 percent. Kuebler said when we sold the stuff to him that there would be no need for discussion. He wanted to keep Kilgore as Kilgore. Most people don't know that the store and the publishing wing are separate entities, anyhow. We still share the same spirit, the same sense of business ethics. His shop is wonderful. I couldn't imagine it in better hands than John Kuebler’s.

He worked for us for a while. It was like the joke in High Fidelity: The guys who show up usually end up having us pay them as employees.

John Kuebler: Yeah. I didn't change much. I got the books off the floor — but some of them stayed on the floor. I thought I might cut down on comics, but I still have just as many as there used to be. Same with sci-fi and fantasy. I’ve kept those up because it sells well, and people know they’ll find good selections here.

Some sections changed and some new ones have been added: We’ve got a grizzly-bear section, a Dust Bowl section, and plague and pestilence and crime and punishment sections.

I think it retains the same feel, right down to the impossible-to-clean carpet and the peeling paint job, too.
I’m just continuing a tradition. When those guys started Kilgore, I think they borrowed a page from Fahrenheit, whom we all admired. We’ve continued pricing fairly and paying fairly for books that come in. A literate crowd gathers at Kilgore.
Kilgore Books on Facebook
What would you like to see happen for the store in the future?

Dan Stafford: The only thing I’d like to see is that it continues forever. John has done a wonderful job with it. It’s cleaner and better than when Luke and I ran it. When I go back and visit, I get to meet all the new regulars, great people who are literate and great conversationalists.

John Kuebler: People ask me if I ever think about a bigger shop or a second shop. But even at this size, we hold about 15,000 books on the shelves. It’s plenty for me to handle and consumes most of my time with cleaning, pricing and shelving more than 500 books a week.

I’m happy to be right here next to Wax Trax, too. There’s still a bohemian flair on 13th, and I like neighborhoods in any city where there are used book stores and record stores. We all have a good relationship and see a lot of the same customers.

I like the size and the focus as a general bookstore that carries only the best stuff. We’ve sorted out the cream for you — you don’t have to do the junking yourself. If it got any bigger, I’d have to sell more online, and then I’d need more support. It’s a great-sized shop for me to handle. If I had my druthers, I’d stay here on 13th Avenue for the next several decades.

Kilgore Books will host an anniversary party and open house on Saturday, June 23, from 6 to 9 p.m., at 624 East 13th Avenue. Admission is free; call 303-815-1979 for details.
KEEP WESTWORD FREE... Since we started Westword, it has been defined as the free, independent voice of Denver, and we'd like to keep it that way. With local media under siege, it's more important than ever for us to rally support behind funding our local journalism. You can help by participating in our "I Support" program, allowing us to keep offering readers access to our incisive coverage of local news, food and culture with no paywalls.
Make a one-time donation today for as little as $1.