Inside the Mile High Dungeon, Where Denver Dominatrixes Bind and Flog 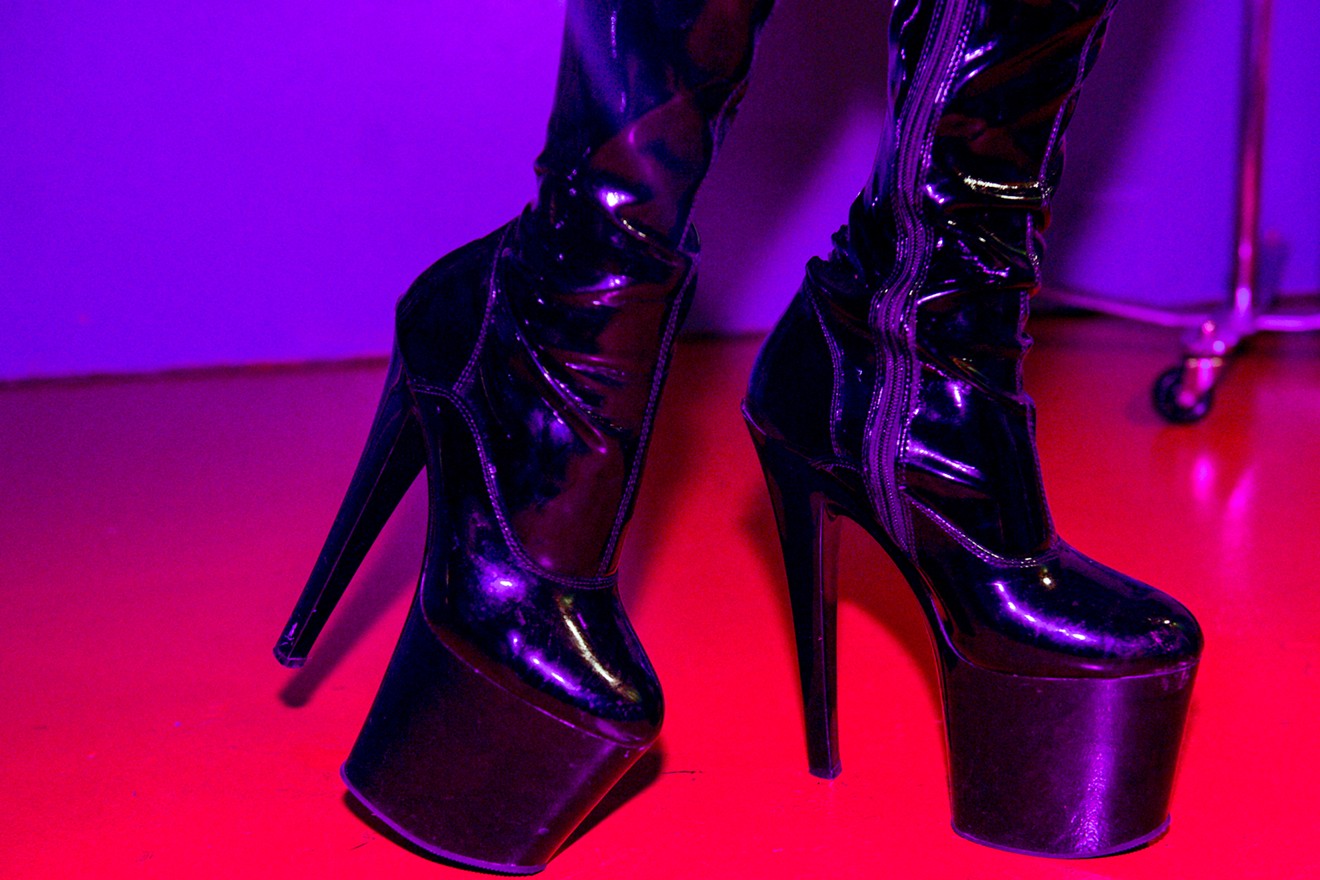 Kenzie Bruce
Behind the one-way windows of a squat warehouse on West Second Avenue is the domain of two professional dominatrixes, one of the premier dungeons in the United States, they say, with clients flying in from around the world.

And you'd better believe them, or you could be punished. 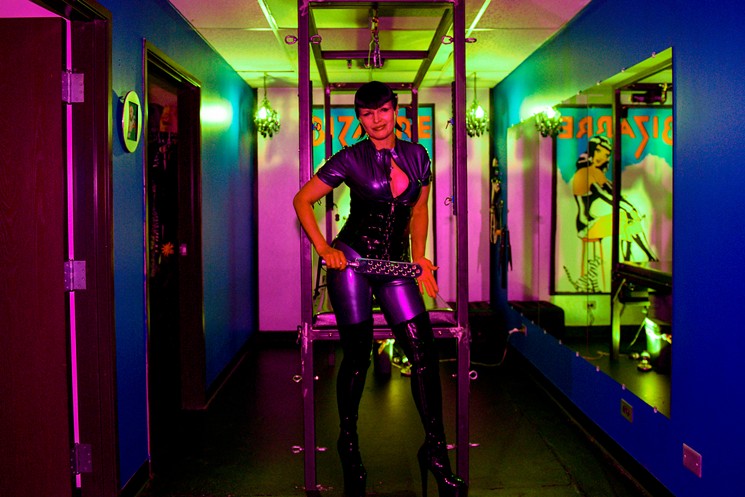 Domina Elle stands in the Black and Blue Room at the Mile High Dungeon. The dungeon has five different themed rooms.
Kenzie Bruce
Between private sessions on a recent weekday, Elle and Victoria agree to give Westword a full tour of their business. Elle is dressed in one of her signature latex suits, which are often so tight that she needs lube to get them on. Victoria, who prefers to stick to leather and lace, is wearing a tight corset. Both sport thigh-high boots with six-inch, elevated heels that look so pointy they could probably double as torture instruments. Neither wants her full name used here.

Each prospective dungeon visitor must send Elle or Victoria an email that lists his or her fetishes. There are different categories, based on the colors of a stoplight. Green lights are acts and fetishes that the would-be client is 100 percent okay with exploring. Yellows are maybes. And reds are no-gos. "Most people know what their reds are first,” observes Victoria. “It's easy to know what you don't like."

"I am fascinated by people’s behaviors, motives and the history behind them," says Elle, who adds that every client is different, and it's her job to help them explore themselves, their sexuality and their desires. “Like, I might ask, what's the first time you remember getting excited about being tied up?” she explains. “And someone might answer, ‘Oh, I saw that Lucky Charms commercial when the leprechaun gets caught in the net.’ The things you hear people say are fascinating." 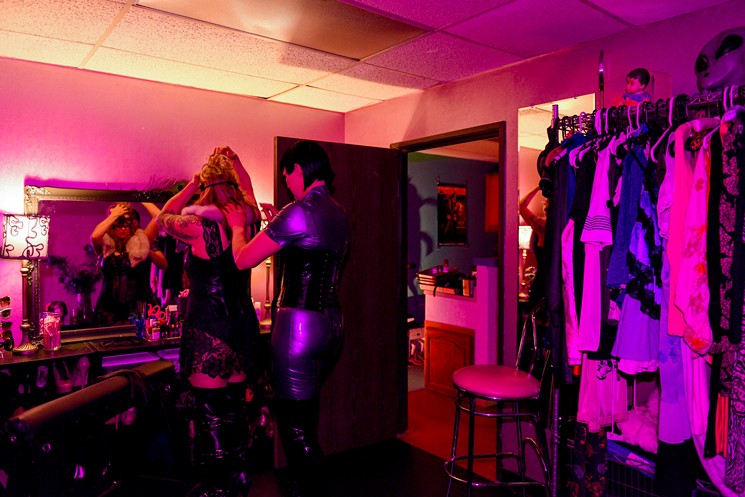 Domina Elle helps Mistress Victoria Marx (left) tie on a mask in the Sissy Boudoir room at Mile High Dungeon. The room is full of dress-up items, including tiaras, dresses, wigs and high heels.
Kenzie Bruce
Elle declines to say how much a Mile High Dungeon session costs, explaining that prices are negotiable and that all sessions – typically two hours or longer – are customized to fit clients' individual needs. And although the dommes always ask clients if they have romantic partners, and encourage couples' sessions, there are some clients who don’t want others to know about their trips to the dungeon.

Client sessions often begin in the Sissy Boudoir, one of five rooms in the facility. It’s essentially an eroticized Hollywood dressing room, complete with wigs, makeup, footwear, coats and even some rubber horse-head masks. The accoutrements help with clients' role-playing fantasies, explains Victoria. "And it can range from just heels and lipstick to a full transformation.”

While some clients already know what kind of transformation they desire, others take suggestions from the dommes. Elle started dressing up her male friends in her own clothes when she was a teenager, so helping with clients' makeovers is second nature. "And playing around with the boundaries of gender, I think, is something that's natural for a lot of people, even if they're not kinky with it," she says. “My favorite is when people have been cross-dressing alone for so long, and finally have the courage to step out of that alone place. Then the intimacy between you and the other person acting out this stuff takes on a whole other dimension."

The Sissy Boudoir also boasts oversized dressing-room mirrors to assist with the costume changes. Then again, there are big mirrors in just about every room of the dungeon; Elle guesses there are forty throughout the sprawling facility. 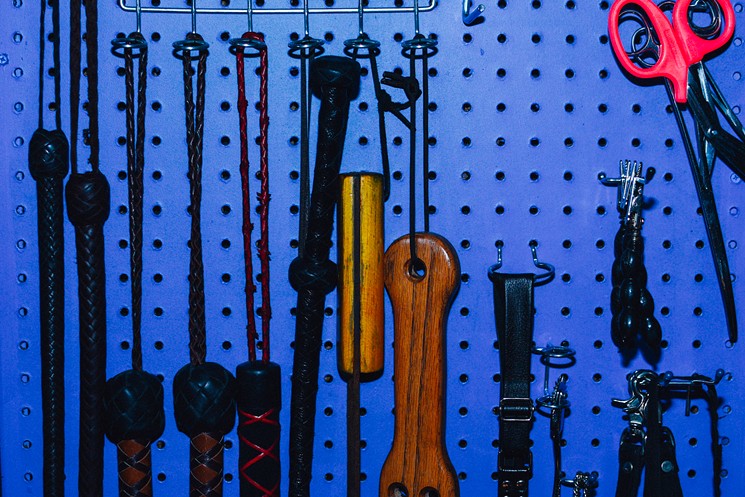 The Black and Blue Room has blue walls, a table, multiple whips and mirrors. The whole facility has an estimated forty mirrors.
Kenzie Bruce
"The mind-fuck aspect is definitely a big part of all of this," she says while observing herself in one of those mirrors. "When you can watch yourself in the act, then you have the visual memory. There's psychological nuances in everything that we do."

Those psychological nuances extend to all sorts of physical tools and instruments used in various dungeon scenarios. A medical-themed room looks something straight out of a slasher film, with an old-school X-ray machine, an anesthesia device, a stomach pump and a “birthing chair” from the early 1900s with metal stirrups. Elle found that on Craiglist, and says the widow and daughter of a recently deceased urologist sold it to her. "They gave it to me on the condition that I wouldn't perform abortions, which I agreed to,” Elle recalls. “But they probably wouldn't have given it to me if they knew what it was really for..." Kenzie Bruce
Adjacent to the medical room is the Black and Blue Room, named after its paint colors; a large suspension frame at the center can be used to bind and suspend people in all sorts of positions. Next to that is the Goddess Room, a relaxing space with a vibe similar to that of a day spa. And finally, there's a huge room at the back with ceilings that are at least twenty feet high and projection screens displaying looping slideshows with all sorts of kinky imagery, including a guy strapped down on a bench whose erect penis is the only exposed part of his body. In this last room, colored spotlights accentuate a ten-foot-tall suspension frame with an electric winch mounted on top that can be used to mechanically raise up...stuff. There's also a spanking bench, an X-shaped cross with straps on each of the arms, and a Victorian-styled bathtub in which clients can rinse off before leaving.

The entire dungeon is immaculate. The dommes always use towels wherever bare skin might touch any benches or frames, so, as Elle notes, “there are no snail trails anywhere." From the music playing over speakers to the smells to the lighting, "every detail affects the situation,” she explains. 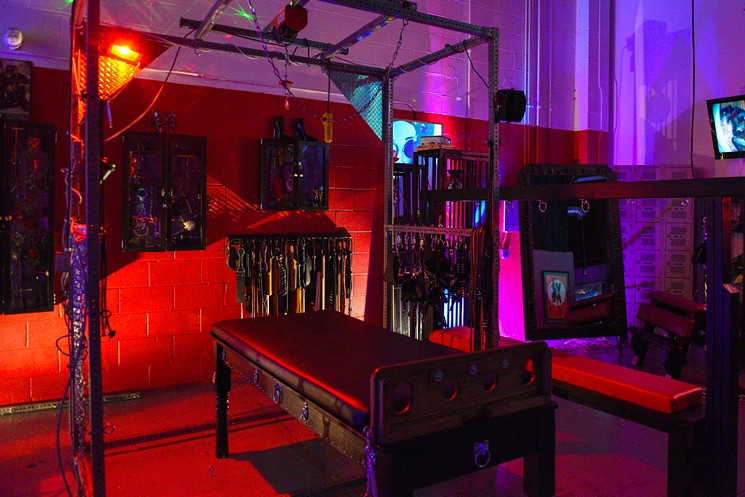 Victoria and Elle identify four basics of a dungeon: a spanking bench, a table, suspension and a cross.
Kenzie Bruce
The dommes say it took all of their own equipment, as well as items donated from three other dungeons, to make Mile High Dungeon a reality. A now-deceased mistress who ran a combination B&B/dungeon in Pueblo left some tools to Elle. “I invoke her spirit whenever I use her paddles," she says, adding that she rarely uses fewer than fifteen different whips and paddles on a client in a session. (She credits another mentor, Mistress Diane, with being “the first professional domme to really put Denver on the kinky map of the United States," back in the ’80s. Mistress Diane is now retired, but Elle says she still has a few loyal clients who fly in from around the world to see her.)

The instruments lined up in various wall-mounted cases throughout the dungeon include such industry favorites as cock-and-balls torture devices, but there are also some unexpected tools, like a metal clamp designed to hold onto deep-dish pizza containers. Elle and Victoria call such commonplace items “pervertables,” since their standard use is perverted once it enters their realm. “When I saw the pizza clamp, I saw a nipple device,” Elle quips. Target and Home Depot, which they jokingly call “Domme Depot,” are both great places to find pervertables, they say. 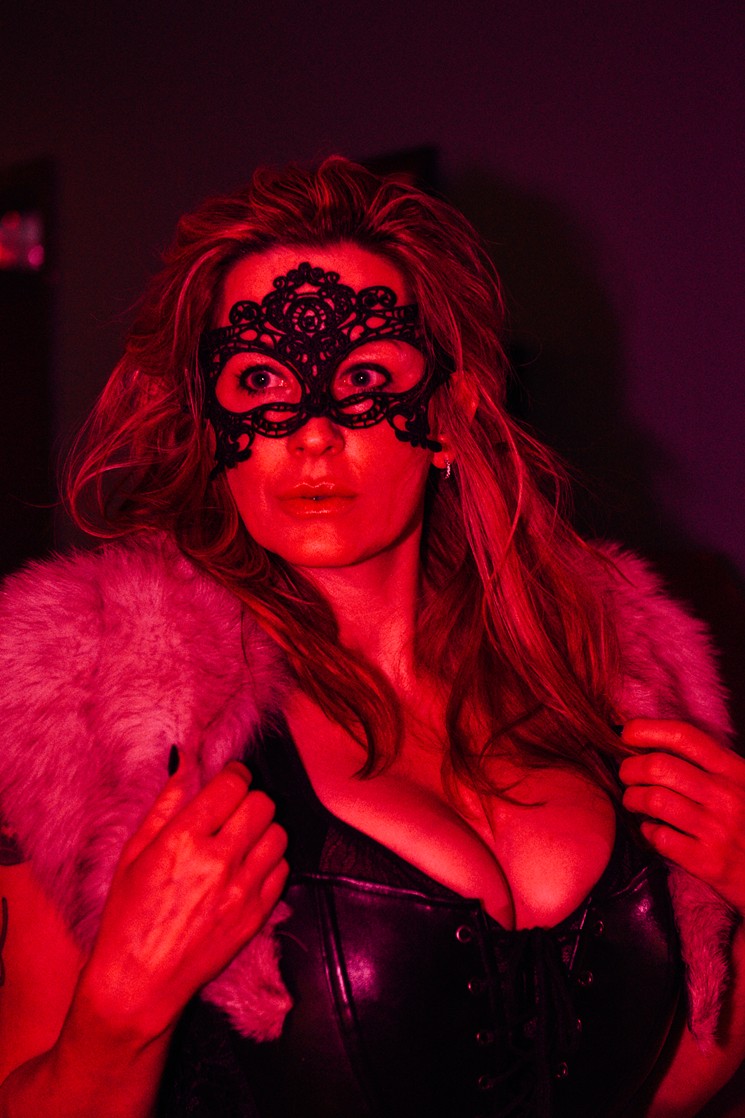 Kenzie Bruce
While it's sometimes difficult to tell when the dommes are kidding, they take their business seriously. Both advocate for decriminalization of sex work and rail against the SESTA law passed by Congress this spring that conflates sex work with sex trafficking. Not that what they're doing involves actual sex; they conform to all applicable laws and regulations.

They’re also careful about following city code. The Mile High Dungeon receives regular fire-department inspections; Victoria jokes that during the first fire department visit, there were two firemen, and ever since there have been at least four men at every inspection.

They want to be sure that they’re here for the people who need them. "This is our sacred space. Within this space, lives change. People bare their souls. They bare the most intimate parts of themselves psychologically and physically,” Elle says. “For me, I'm about raising energy up, helping people evolve and grow. And the sexual piece of ourselves — gender, what our boundaries are, what we're okay with — is a development that has been stifled by shame and weirdness in our society. We really need to get real about sex, period. I think a lot of abuse stems from the shaming and weirdness that humans attach to sex. So we need to back up a little bit and look at, in a reasonable and compassionate way, our bodies and sexuality and all these people who think they are entitled to limit what other people do, whether it's because they're gay or sex workers or swingers or polyamorous. It's time to move past all of that and grow up."
KEEP WESTWORD FREE... Since we started Westword, it has been defined as the free, independent voice of Denver, and we'd like to keep it that way. With local media under siege, it's more important than ever for us to rally support behind funding our local journalism. You can help by participating in our "I Support" program, allowing us to keep offering readers access to our incisive coverage of local news, food and culture with no paywalls.
Make a one-time donation today for as little as $1.