Review: The Catamounts Get Wild With Beowulf: A Thousand Years of Baggage 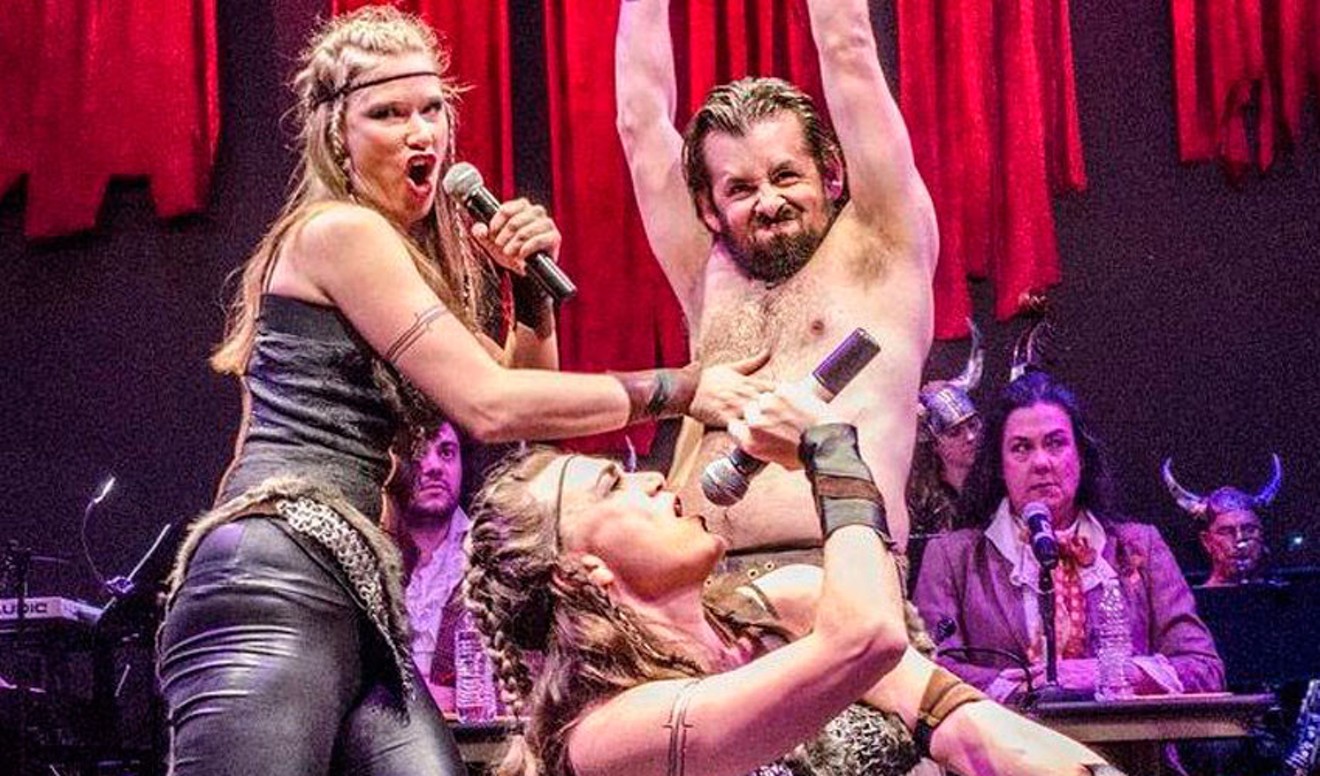 Beowulf: A Thousand Years of Baggage takes on the epic poem. The Catamounts
When I sat down to watch Beowulf: A Thousand Years of Baggage in the mead hall that the Catamounts had cunningly created in the Dairy Center’s Carsen Theatre — a cheerful, noisy drinking space, complete with tables and chairs, and with small glasses of delicious raspberry mead for every patron — I had only vague memories of the Old English epic poem Beowulf. Those memories had something to do with a banqueting hall, a murderous monster named Grendel, and Beowulf, the hero who slays him. I seemed to recall long and seemingly pointless passages of pretty much nothing but blood, and I’m sure I never finished reading the thing.

But you don’t need to be a Beowulf fan to get swept up in this extraordinary production, which begins with a panel of three scholars attempting to dissect the text. Soon one of them, Ben Hilzer, transforms into Grendel and begins his killing spree, to the dismay and perplexity of the king, Hrothgar, played by Gary Grundei, who’s also the music director. All of this action in Jason Craig’s script is accompanied by throbbing, raucous music by Dave Malloy, a mix of rock, Brecht-Weill, chant, almost-opera and gypsy jazz that turns the evening into a scintillating concert.

But it’s better than a concert, because there’s also a story, told in a series of insanely comic and inventive scenes. Take the utterly daft battle between our unlikely Beowulf, played by Joe Von Bokern, and Grendel: Pale-bellied and wearing spectacles, Von Bokern nonetheless asserts his heroic masculinity, flexes his muscles, tosses off a few (actually, rather impressive) hand-clap push-ups and rushes at the foe. He prevails. We meet the dying Grendel’s underwater-dwelling mother (Joan Bruemmer-Holden, also one of the academics) and listen to her tender song as she holds him (“Mama, he ripped off my arm”), laugh at her angry diatribe against Beowulf (“Did you know he was slightly retarded?...You filthy fascist,” to which he can only respond defensively that he himself is “a little dyslexic”). Through this scene, you wonder whether there’s some incest here; perhaps that’s the baggage of the title. Or perhaps the baggage is hyper-masculinity — if it isn’t simply the endless, meaningless, irritating pick-pick-picking of academics at these ancient texts.

Finally, after a long, successful life, Beowulf wants to encounter the dragon that he knows will destroy him. The critics demur. They want to keep analyzing. They want him to reflect on his life. They want to talk about art. “You know nothing about blood,” he exclaims. At last the third critic (Kate Moore) metamorphoses. Tearing up the book, leaping over the desk, she becomes the attacking dragon. After the fight, Moore sings a lament in the original Old English, revealing a lovely voice.

All of the performances are fine, full-bore and very physical. Actors leap effortlessly up onto your table, gaze at you meaningfully and occasionally take your hand, mutely asking for comfort. One of them may even gulp down your drink. Artistic director Amanda Berg Wilson plays one of the two warriors who serve as a kind of dancing chorus (the second is a charming Allison Caw); with her elegant grace, her long, black-leather-clad legs, Berg Wilson is a kind of warrior goddess, and she sings like a rock star. Grundei’s music direction is exhilarating. There’s plenty of dancing (co-choreographed by Bruemmer-Holden and Berg Wilson), and the movement is comic, free, fierce and perfectly synchronized, down to the smallest shoulder shrug. Director Meridith C. Grundei can take credit for the show’s precision, flow and eye appeal. I did have one problem with the production, though: The academics’ mikes were set very loud, and the three actors sometimes held them so close to their lips that the words were obliterated by static.

The Catamounts are known for marrying theater art with food and providing community dinners after Saturday-night performances —not just bread and cold cuts, but offerings carefully crafted to the theme of the evening. With Beowulf came cornbread, baked beans and huge smoked turkey legs, which community meal director Lauren Shepard had somehow managed to ensure were succulent rather than dry. Eating and drinking with other audience members while sharing the exhilaration of what we’d just experienced was the perfect capper for this rousing, rattling, clever and sophisticated evening of theater.