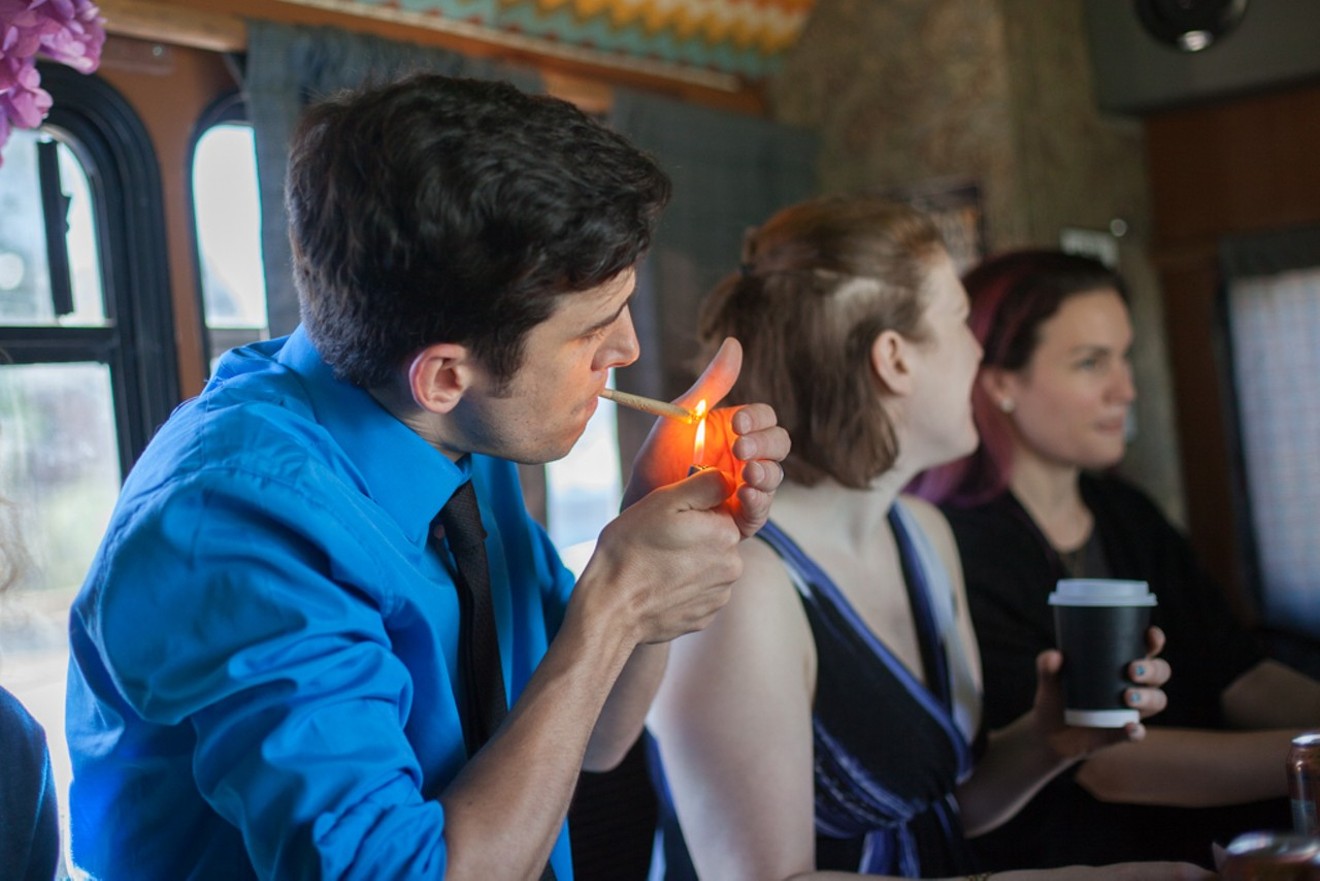 Social marijuana consumption is still largely confined to private venues and events in Colorado. Jacqueline Collins
A bill that passed the Colorado General Assembly that would've allowed marijuana dispensaries to open their own tasting rooms was vetoed by Governor John Hickenlooper today, June 4. HB 1258 received plenty of attention as it made its way through the state legislature and wasn't without its detractors, but it had enough support to pass its third House and Senate readings — 39-24 and 22-12, respectively.

“Since Colorado approved Amendment 64 in 2012, this Administration implemented a robust regulatory system to carry out the intent of this voter-initiated measure,” said Governor John Hickenlooper in the veto letter. “Amendment 64 is clear: marijuana consumption may not be conducted ‘openly’ or ‘publicly’ on ‘in a manner that endangers others.’ We find that HB 18-1258 directly conflicts with this constitutional requirement.”

The measure would have created a licensing system similar to those that allow brewery and winery tasting rooms, allowing dispensary patrons to visit a separate room or area by the dispensary to vaporize cannabis flower and concentrates or eat edibles in a controlled environment.

“This was a modest step forward to educate cannabis consumers before they get on the road,” said State Representative Jonathan Singer, a sponsor of the bill, in a statement. “Today’s outcome just proves we need to work harder to show that cannabis consumers don’t belong in the shadows.”

Amendment 64 — the legislation that legalized recreational marijuana in Colorado — prohibits "open and public" use, but pot advocates and lawmakers have been searching for a way to resolve the public-use issue as tourists and Coloradans alike struggle to find places where they can consume outside of their homes or pot-friendly hotels.

Dispensary chains such as Terrapin Care Station and LivWell had been pushing the bill since last year, but it received early opposition from the Colorado State Patrol, American Cancer Society, American Lung Association and Smart Colorado. The groups cited concerns about impaired drivers, secondhand cannabis vapor and potential exposure to children.

If Hickenlooper had signed, Colorado dispensaries would have still needed approval from both state and local governments for tasting rooms, and no pot shops within 1,000 feet of a jurisdiction banning marijuana sales could have applied. The state Marijuana Enforcement Division was neutral on HB 1258, but added that its "incremental approach" was more responsible to the public than a bill that would have licensed social pot lounges that was killed in the Senate earlier this year.

Denver allowed businesses such as yoga studios, art galleries and cafes that don't sell marijuana to apply for social marijuana consumption areas in 2017, but the city's location restrictions have led to just one successful application as its first anniversary approaches.

“What we were trying to do with House Bill 1258 was offer certainty on the issue of public cannabis consumption so that regulators could have a bright line when it comes to enforcement,” Chris Woods, the owner of Terrapin Care Station, said in a statement. “In its wisdom, the Colorado Legislature sought to close a significant gap in regulation. It’s unfortunate that the governor chose not to offer another regulatory tool to state and local regulators. This fight is not over.”

While Colorado lawmakers can override a gubernatorial veto with a two-thirds vote in favor, the 2018 legislative session is no longer in session.

Update: We've added a statement from Governor Hickenlooper.
KEEP WESTWORD FREE... Since we started Westword, it has been defined as the free, independent voice of Denver, and we'd like to keep it that way. With local media under siege, it's more important than ever for us to rally support behind funding our local journalism. You can help by participating in our "I Support" program, allowing us to keep offering readers access to our incisive coverage of local news, food and culture with no paywalls.
Make a one-time donation today for as little as $1.