iStock.com/KatarzynaBialasiewicz
How Colorado should use tax revenue from recreational sales was a hot topic before marijuana was legalized. So was how to prevent youth consumption of cannabis. In fact, both are still hot topics, and now Denver will use a portion of the taxes collected by the city to fund marijuana prevention education in twenty after-school and summer programs around the city.

The educational project comprises a ten-hour curriculum split into two courses for teenagers and kids in middle school, according to the Denver Department of Excise and Licenses, which oversees licensing for the city's marijuana industry. Teaming up with the Denver Office of Children’s Affairs, Excise and Licenses is using a portion of the city's 3.5 percent special sales tax on pot products to help fund Healthy Lifestyles courses.

“Our marijuana education curriculum is just a fraction of the work that after-school programs do to keep kids healthy and help them make smart decisions,” Erin Brown, executive director of Children’s Affairs, says in a statement announcing the new project. “Denver’s marijuana tax revenue benefits nearly 10,000 youth and makes a world of difference to families who need accessible, high-quality after-school and summer programming that ultimately helps their children succeed.”

Healthy Lifestyles is designed to clear up myths about marijuana and teach students about Colorado's unique laws regarding pot; this course was funded by a $1.5 million allocation of tax revenue collected in 2017, according to Excise and Licenses. Some highlights from a 205-student sample quoted in the department's analysis of Healthy Lifestyles 101:
The next phase of the curriculum, Healthy Lifestyles 201, is a "more advanced course that focuses on deepening youth knowledge of marijuana," according to the city, which will share survey results from that course sometime in the fall.

“It’s pleasing to see this sample of teenagers have a good understanding of the potential ramifications of youth marijuana use after participating in this particular after-school curriculum,” says Excise and Licenses executive director Ashley Kilroy. “It demonstrates that marijuana tax-funded education programs are paying dividends by helping teenagers understand the dangers of consumption to their health and their future.” 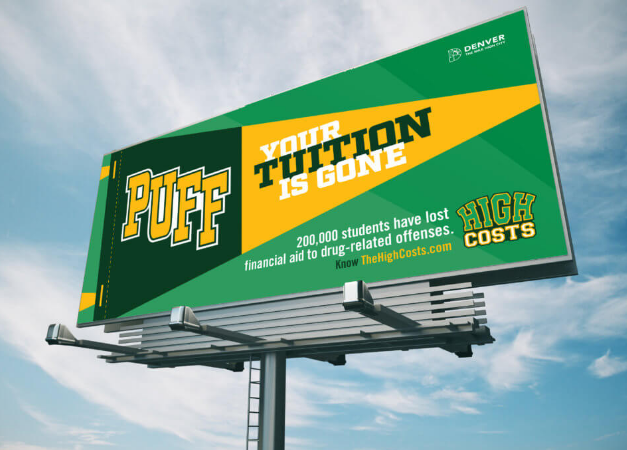 The High Costs campaign debuted in December 2017.
The City of Denver
Denver's marijuana tax revenue helps fund 43 after-school organizations in the city, including the Boys and Girls Club of Metro Denver, Girls Inc., the Bridge Project and the YMCA. At the end of 2017, the department also directed tax revenue to High Costs, a program aimed at high school students that used social media, trivia games, billboards and school-bus signs to raise awareness about the dangers of using recreational marijuana at a young age.

The special sales tax around marijuana was created to fund city efforts related to implementing legal pot, including youth prevention, local regulation and law enforcement. Although it currently sits at 3.5 percent, the special sales tax could be raised as high as 15.5 percent.

In April, Mayor Michael Hancock proposed raising the special sales tax to 5.5 percent to help fund affordable housing. The increase would add a projected $8 million per year to the city's budget, according to the mayor's office, while adding around $1 of extra sales tax to a $50 dispensary purchase. That proposal is still under consideration.
KEEP WESTWORD FREE... Since we started Westword, it has been defined as the free, independent voice of Denver, and we'd like to keep it that way. With local media under siege, it's more important than ever for us to rally support behind funding our local journalism. You can help by participating in our "I Support" program, allowing us to keep offering readers access to our incisive coverage of local news, food and culture with no paywalls.
Make a one-time donation today for as little as $1.