A Bud Crawl With the Loopr, Denver's Mobile Pot Lounge The Loopr picks up cannabis consumers stranded in Denver without a place to toke. Tyler B Grimes
A group of 4/20 enthusiasts stand outside Purple Haze head shop on East Colfax Avenue. Snapping selfies, two ladies wear matching “Best Buds” T-shirts boasting big, green cannabis leaves as they prepare to get giddy over ganja. They came all the way from Dallas to partake in Denver's legal 4/20 festivities.

Unfortunately, there aren't many places to partake outside of one's home yet — public cannabis consumption is banned in Colorado — leaving locals and tourists alike in a bind. Although Denver has been a weed destination for several years now, the city is still figuring out the best ways to implement adult consumption in lounges or social areas. But instead of waiting for legislation to change, friends Hal Taback and Bryan Spatz found a loophole, or in this case, a Loopr.

The two started the Loopr mobile cannabis company in 2016, turning a bus into a short-term private smoker’s lounge for guests 21 and older who sign a consent agreement to participate. “Welcome to your 4/20 afternoon. We’re headed out to Colorado Harvest Company. It’s about a thirty-minute ride, so get nice and highery on the way," Taback announced over the intercom after everyone had boarded the smoke-filled vessel. "We have Harmony providing some dabs for you on the way.”

Taback and Spatz are both prepared and tech-savvy for riding high. The haze from dabs and smoke quickly disappeared through the roof vents as the bus started moving, and glass bubblers have their own cup holders so they’re not knocked over from bumpy roads. By downloading an app on their phones, users can find predetermined routes the Loopr is taking around Denver. It's regularly spotted cruising lower downtown on the weekends, but on 4/20, it's taking riders on a bud crawl, or a smoke-filled dispensary run.

Although locals have been exploring the idea, the bus is an obvious pull for tourists. “I heard about Loopr from a dispensary called Life Flower. I came to Denver about a month ago, and rode the Loopr bus then and had a great time, so I brought my best bud this time to experience where it’s legal,” explained Kai Perry of Dallas. “The environment’s better [in Denver]. Everyone is so friendly. I don’t want to move here, because it’s too cold, but I could do this every year for 4/20.” 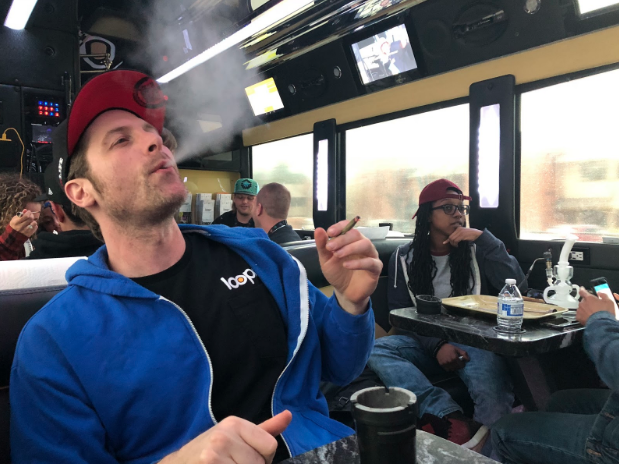 Loopr co-founder Hal Taback.
Emily McCarter
Once aboard the luxury party bus equipped with a smorgasbord of glassware and rolling accessories, users started unpacking their bags, almost immediately sparking up joints and packing bowls. Across the aisle, a woman started cutting out the guts of a green apple blunt wrap. “We’re from Chicago. Our first stop after the airport was a dispensary," said Shaye Rae, who was told about the Loopr during her dispensary visit. "The bus was our second stop."

"Happy holidays,” she added as she licked the blunt wrap. “I can’t wait until they legalize it in Chicago.”

Besides creating a fun atmosphere to smoke with fellow users, the bus also provides a trial-run and learning experience for rookies at dispensaries. Tour guides give Colorado newcomers an introduction to the world of legal cannabis world while providing transportation to a dispensary and expertise regarding the ins and outs of flower, concentrates and edibles. The dispensary du jour was a Colorado Harvest Company location in Aurora, where almost everyone on the bus bought the 4/20 special: four joints for $4.20.

Last year on 4/20, Taback tried to run his regular route on Loopr, a hop-on, hop-off experience where you could buy a day pass or a three-hour pass. “Everyone bought day passes, got on at, like, 10 a.m., and wouldn’t get off the bus. It was terrible; they just sat in the back and fell asleep." he said. "I was, like, ‘Next year, I’m going to build this day for all it’s worth. I’m going to start at ten in the morning and do two-hour loops back-to-back to try and get everyone an opportunity.'”

The Loopr can regularly be spotted rolling around downtown Denver.
Tyler B Grimes
Although Initiative 300 passed in November 2016, giving qualified businesses the ability to apply for a license to allow for adult marijuana consumption in designated areas, only one business with a consumption license has been established. Taback believes the initiative's strict location restrictions hurt it from the start.

“They forgot that they’re trying to imitate something in other countries where they have an adult area, like the red-light district in Amsterdam,” Taback explained. “There’s no children [there]. Here, they forgot to section it off." Mid-sentence, Taback’s partner, Spatz, calls from a pool somewhere in Arizona. Spatz does more of the executive work for Loopr, looking for new cities in which to implement the bus. Had they achieved their hopes for a medical marijuana Loopr in Scottsdale, Arizona, they would have had a bus there for 4/20, too, but are now focusing on California, Massachusetts, Nevada and Canada.

“We all want laws to change overnight, because we’re all Americans. We forget how long these wars were fought; it takes years and years to make a message, legislate it, enact the law," Taback concluded. "People ride the bus that tell me they’ve waited 45 years for this and didn’t think it would happen.”

Lucky for Denver cannabis consumers, that change is already happening, and it could be driving down your street right now.