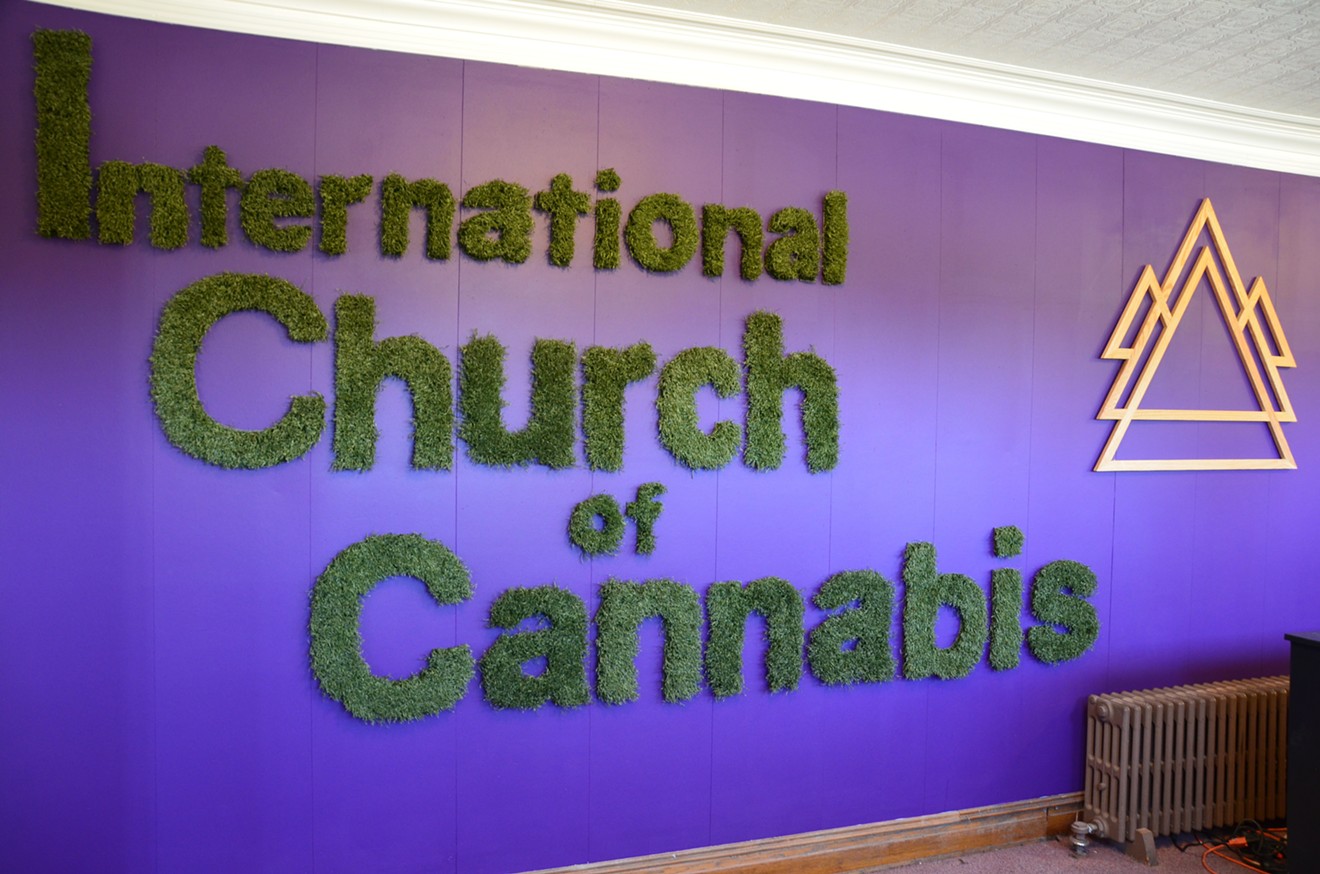 The International Church of Cannabis opened its doors in April. Lindsey Bartlett
The International Church of Cannabis arrived in Denver this spring on a gust of excitement and controversy, gaining attention for its artful restoration of a church in the West Washington Park neighborhood and public affirmation of cannabis events. All of that attention may have also created a target for law enforcement, however, with Denver police officers crashing the party and issuing citations during one of the church's first big celebrations.

After making its presence known to the media in the days leading up to April 20, the church announced plans for events throughout the 4/20 weekend, with a private, consumption-friendly party to cap off the holiday. Church founders met with officials from the City Attorney's Office and the Denver Department of Excise and Licenses in advance, going over proper practices to ensure a private, consumption-friendly event that would be legal.

Yet that wasn't enough to prevent a string of citations from being issued to three of the church's founders for public pot consumption and Clean Indoor Air Act violations on 4/20. Although the church had been open to the public from noon to 3 p.m., it was closed after that to prepare for the private function, according to Steve Berke, one of the church's founders. Still, three undercover police officers apparently entered the private church ceremony around 4:40 p.m. that day, even though the event was by invitation only and there was a security staff with a guest list at the door.

Berke believes that two of the undercover police officers had signed up for an invitation to the event under an alias. Another entered without an invitation when other officers distracted the security guards and only Berke's 72-year-old mother was manning the doorway. According to Berke, one of the men who'd been there earlier convinced his mother that he had just stepped outside from the private function and was allowed to re-enter. 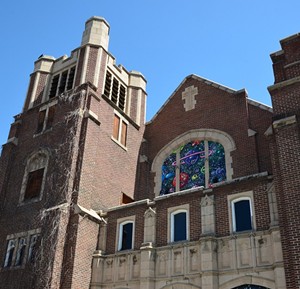 Both the interior and exterior of the church have been updated with murals since Elevation Ministries moved in.
Lindsey Bartlett

"This is private property," Berke says of the church grounds. "We met with the city attorney on Monday, [April] 17. We knew we were under a microscope. Our lawyers told us to have guest lists, ID checks and everything ready. We were warned about undercover cops. We adhered to strict guidelines, and they still had undercover cops sneak into the event."

City officials definitely met with church founders to go over guidelines for the event, but they dispute that it was ever private in the first place. That's why undercover police officers went to the April 20 celebration to "test it out," according to Dan Rowland, director of public affairs for the Denver Department of Excise and Licenses.

It's fairly common practice for the city to send undercover officers to see how private certain cannabis consumption events actually are, says Rowland. "People running these events have passed it, and people have failed it," he adds. "If this were a truly private event, they wouldn't have found themselves here."

Canna Security, a firm specializing in security for cannabis businesses and events, was hired by the church to guard the door, Berke says. Because one of the security guards didn't have proper identification, the entire crew of five were detained by police officers, and that's when officers entered the building, he explains.

One of the security guards who was working the event is no longer working for Canna Security, according to the company, which did not respond to further requests for comment.

Only three people — church founders Steve Berke, Lee Molloy and Briley Hale —  were issued citations for the 4/20 event, though Berke says they didn't receive notice of the citations until days later, during an arranged meeting with Denver police at Vicente Sederberg's law offices. (Berke is a client of the firm.) There is no evidence of the three founders consuming cannabis that day, they say, though other attendees – none of whom received citations – were openly consuming cannabis.

The Denver Police Department declined to comment on the situation, saying it would be inappropriate to discuss cases pending with the city. Marley Bordovsky, the city attorney in charge of the case, also declined to speak. 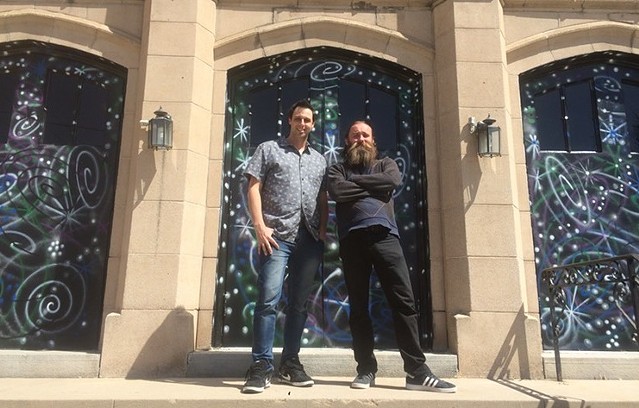 Steve Berke (left) and Lee Molloy (right), along with co-founder Briley Hale, were issued citations for public consumption on 4/20.
Thomas Mitchell
But Berke is definitely talking. ''I was running events and doing media interviews all day and running an event of 400 people. I didn't even have time to get high that day," he says. "We turned down maybe 100 people, but because one person snuck in, the entire thing was public?"

Since it opened, the church has been covered by media outlets ranging from the New York Times to USA Today and Vice, much to the chagrin of some of its neighbors in the West Washington Park neighborhood – notably those in the West Washington Park Neighborhood Association, who complain about the church's abrupt arrival without notice and the parking, noise and odor issues that they fear will come with it.

Berke says the church is "absolutely" ready to fight the citations if it has to, reserving the right to take the city to court for religious persecution. Elevation Ministries, a practitioner of Elevationism, operates the spiritual practices at the International Church of Cannabis. However, state and city lawmakers have repeatedly said that religious practices do not excuse breaking social pot-consumption laws; Rowland confirmed that stance.

Even without a religious exemption recognized by the city, church leaders still believe they didn't break any laws, comparing the ceremony to a wedding that was crashed by people who were uninvited — in this case, police officers.

The city clearly disagrees, however, and is confident enough to move forward with the citations. "This isn't any different than how we've looked at any sort of public-consumption law we've enforced," Rowland says. "All of this information will come out in the proceedings."

The three church founders are scheduled for a hearing in Denver County Court on Tuesday, July 25.