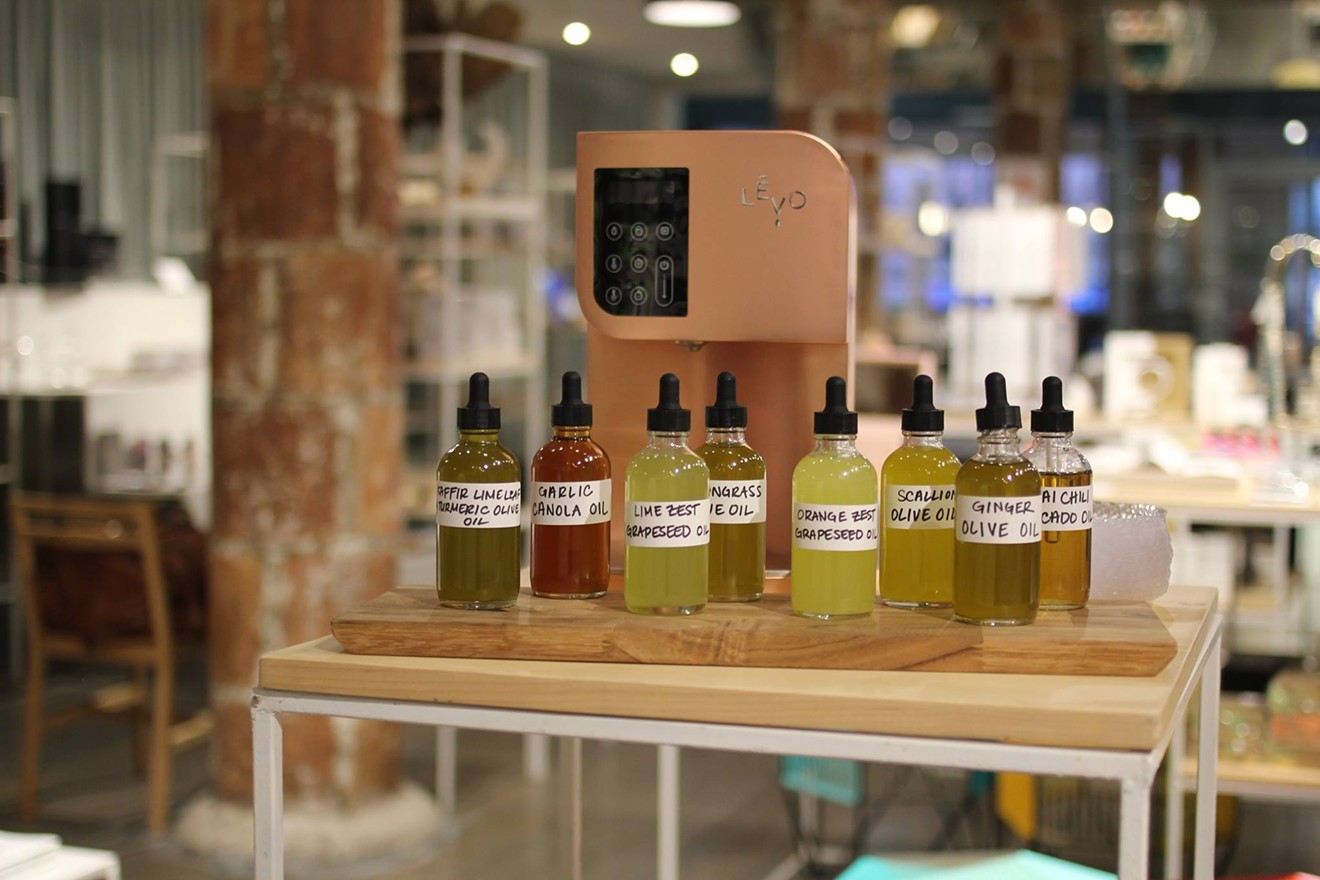 LEVO Oil Infusion is the at-home cannabis-oil infuser of your dreams. Photo courtesy of Levo Oil
No, this isn't an espresso machine. It's an at-home cannabis-oil infuser, one that would fit right in on the shelves of Bed, Bath & Beyond (in the Beyond section). Created by a Colorado-based company and launching this month, LEVO Oil Infusion will turn novice home cooks into real-life cannabis chefs who can make pretty much any flavor of herb-infused oils they can dream up.

When businesses manufacture the oil to make the cannabis-infused edibles you purchase at dispensaries, they use commercial extraction equipment to do it. These machines require some form of solvent, like butane or CO-2, and the process isn't cheap; a commercial extraction machine can cost anywhere from $3,000 to $40,000.

While LEVO is technically an infuser, not an extractor, it boasts remarkable technology for the masses and is priced at an affordable $199. Even better than the price, though, is that you can now make your own oil in accordance with your needs, rather than guess what type of weed is in an edible or manufactured oil. As LEVO founder Chrissy Bellman explains, "With LEVO, depending on what you want, if you want a really high in THC edible, or if you want a really high in CBD or THC-A, you can use strain choice, temperature and time to customize all those factors to really make your own."

We recently spoke with Bellman about how LEVO came to be, and bringing cannabis from the shadows into the mainstream of health and wellness.

Westword: When did the idea come to you to make the first at-home cannabis infusion machine?

Chrissy Bellman: In 2011, I was still in school, studying abroad, and I witnessed some people trying to do home infusion in a shared house I was in. It was a very dramatic moment as I was watching these people make a huge mess. I was watching them stink up the entire house, argue over each other about the best practices.

I quickly realized that when you looked up the best infusion method online, it was like a gold mine of content. There were all these different people saying different things about the best practices for infusion. One blog would say do it this way, one would say do it that way, and I just kind of had an epiphany.

What was this epiphany?

It's a twofold epiphany. The first thing was, okay, having watched these people doing this, it's like making coffee Except the ingredients are more difficult to work with. Why can't you just make it as easy as brewing coffee? Then, looking at the content I found about methods, I saw an opportunity for becoming the truth or trusting voice on a topic that has no trusting voice on the best practice: the fact that oil infusion is the same process that makes cannabis-infused coconut oil. So that's why LEVO was born, to develop a compelling brand that would bridge the gap between mainstream alternative wellness and cannabis. 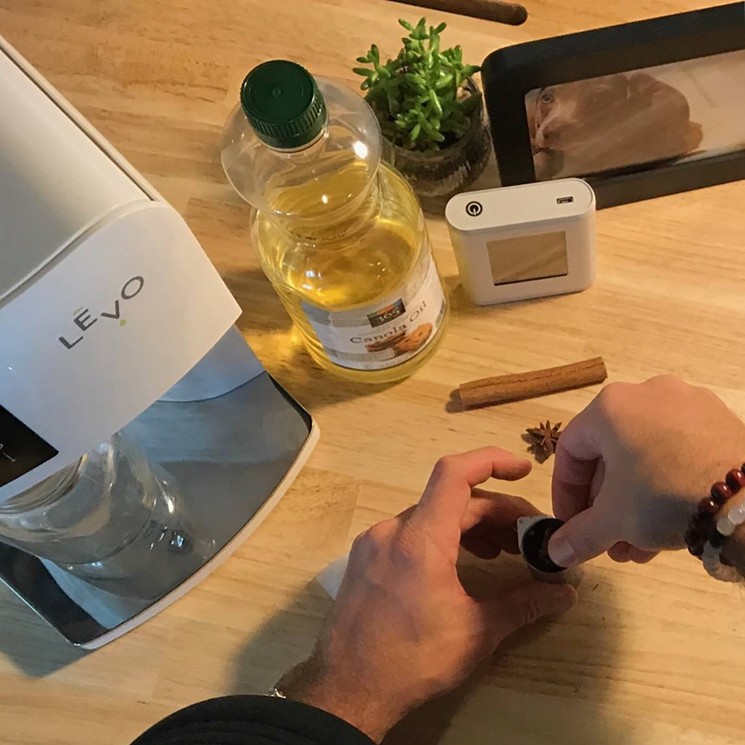 Photo courtesy of LEVO Oil
When did it begin to take to the mainstream?

When I returned to Manhattan, I was really passionate talking about this, and people thought I was nuts. I was like, "The cannabis user is like a Whole Foods shopper." At that time, especially in New York, where cannabis was not decriminalized, people just weren't picking up what I was putting down.

I came to Colorado and kind of waited ’til the time was right for people to accept that message about the brand; this is why we're all about high design. We're trying to, through high design, through trustworthy content; we're trying to make infused foods and wellness products more accessible. By making the machine so convenient, even if you made basil-infused olive oil, it would be a lot easier than you'd imagine.

Access means making it not as messy, making it socially acceptable, making it affordable, making it faster. Those all fall under access. One of our huge goals is, we want to be a part of normalizing the industry. An herb is an herb is an herb; that's always been my vision, herbalism. As with non-cannabis herbs, it has always been a thing. The anti-inflammatory properties of turmeric has been used to heal. And we're just now learning the fact that THC has more anti-inflammatory value. They all have amazing healing properties; they're plants. The way to normalize the industry is to start treating marijuana like a plant.

LEVO is going to cost a regular consumer just under $200. How did you make the technology so affordable?

Part of it is, the technology is different. I don't claim to be an extraction device — that's not what we're doing. I don't need ultra-high-pressure functionality. We went in a different direction: We have a patented seeping method, more like the process used for coffee. It's infusion through seeping. The benefit of seeping is that you don't need a solvent.

The reason that extraction machinery is so expensive, you're squeezing every possible thing out of the plant; you're using solvents to get everything out of it. For commercial purposes, they have to have a consistent shelf life, so no moisture content; and they do it at such a large scale, they want every little bit of it, they have to make it economical. They use stems, shake, whatever they can. But when you're at home and you want to use an organic strain from your premium dispensary, you can't find edibles with that level of control over the product. You want it in its purest form. You want to use items you buy at the grocery store and items you buy at the dispensary. People care about ingredient control.

Photo courtesy of LEVO Oil
What's your favorite recipe that you can make with LEVO?

I'm super into topicals; I really like to make my own homemade skin scrub. It's a very easy thing for me to do. Obviously, I'm a worker; I'm not taking edibles all the time, because I'm busy during the day, so I love to make a lavender-infused coconut oil and add sugar and orange juice to make my own scrub. Salt, lemon juice, infused olive oil is another recipe I used to make a scrub. That's something that I go to. I don't like to spend a lot of money on skin care.

What other recipes or oil infusions do you like?

I'm really interested in getting into edibles that you don't decarb [decarboxylate] first; they're higher in THC-A. You can do it at a low temp; you can make a very CBD-infused edible, which makes most people not as prone to paranoia or other things that people are nervous about with edibles.

How did you engineer LEVO?

I'm not an engineer myself; my background is in business development. So I learned about product manufacturing to develop this. I started by hiring industrial-design students in New York City. I pretty much have always worked with production partners. I personally go to the factories and visit myself, and became really involved to make this all happen. I don't pretend to be an engineer, but I work with really talented people.

As an owner of a cannabis company, and as a female, how do you feel about this particular industry and its inclusion?

What's fascinating to me about this industry, coming from two bureaucratic industries — I worked at a Fortune 500 company, I was an IBMer for five years, and I also worked at a bank — what stands out to me in the cannabis industry is that it's merit-based. The emergence of women in cannabis is not something about the female plant; I think the real thing is that it is a merit-driven industry. If you have an idea and a vision and you work your tail off to do it, you can do it. There's no legacy, there's no bureaucracy, there's no red tape in front of you.

It's also driven by very professional people who want to pave the way and take risks. There are a lot of women who are really smart. It also drives better morals in business. In this business, I've noticed people are so much more collaborative and open-minded and sharing. This industry is the definition of a hyper-efficient industry that's growing really fast.