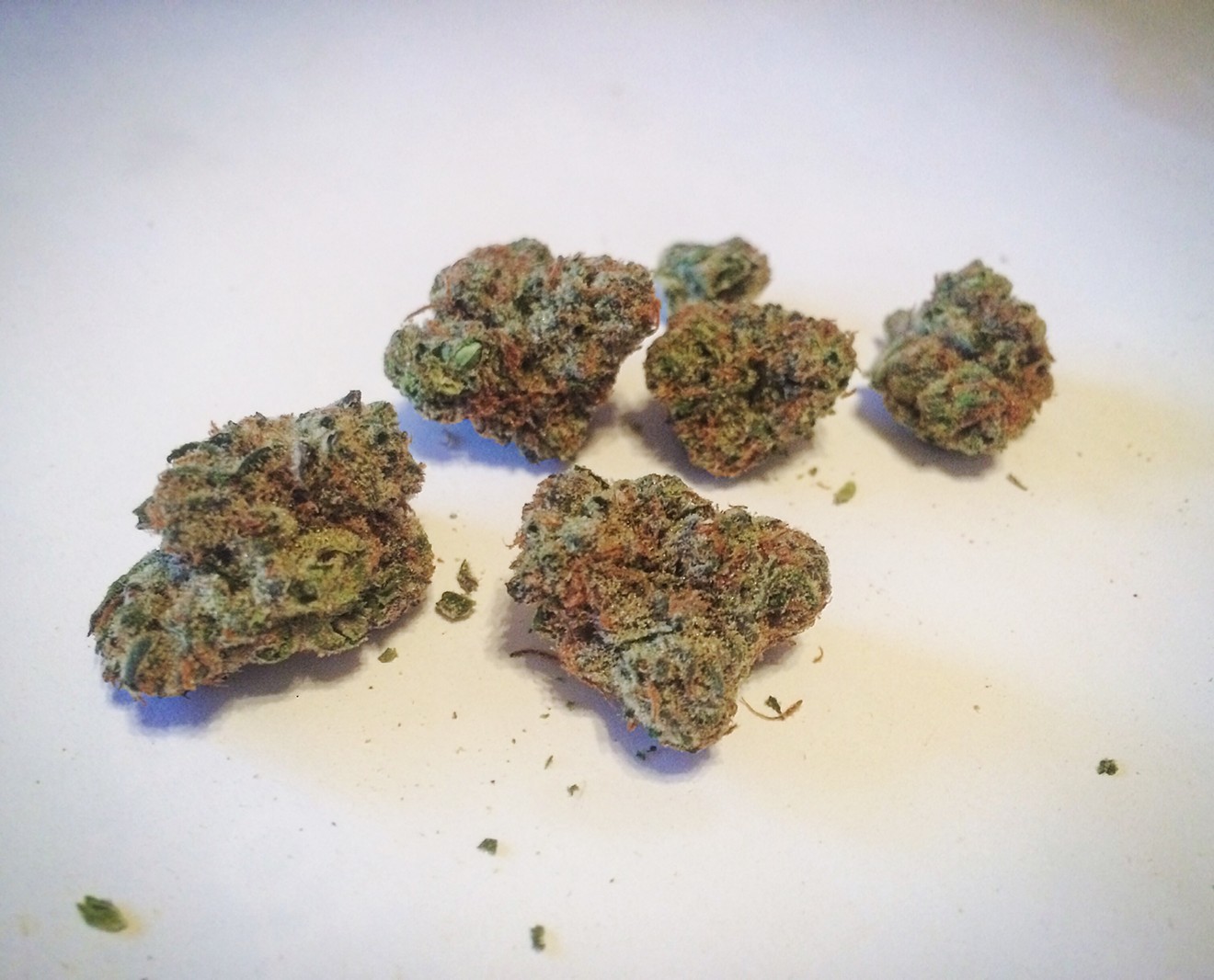 Tasty, toasty Tiger's Milk. Herbert Fuego
The lion may be king of the jungle, but the tiger is king of flavor. I’d reminisce about saving my allowance for tiger’s blood snow cones (watermelon, strawberry and a hint of coconut) more often if it weren’t for Charlie Sheen’s implosion. We all know Frosted Flakes are more than good, and Tiger’s Milk was the only edible power bar until the health-food explosion. Face it, Hobbes was right: Tigers are the best. And there’s one more trophy to add to the list: Tiger’s Milk, the cannabis strain.

I only came across Tiger’s Milk within the past year, but we’ve been on a fast track of burning love ever since. This strain has qualities that are rare in the weed world, giving off smells closer to a vanilla milkshake than citrus or pine trees. Bred with Appalachia and Bubba Kush genetics, Tiger’s Milk comes from the mysteriously hidden strain breeder Bodhi Seeds and was eloquently described as “nursing from the smoky tit of a giant psychedelic tiger” by the people at SeedFinder. It’s hard for me to disagree: This milky strain lullabies me to sleep like a wet nurse.

I’ve always respected the power of Bubba Kush, but I don’t always enjoy it. It can debilitate me, and even though I use it at night, sometimes it just makes me too drowsy. The same thing happens with Afghani, Kosher Kush and other great indicas. Tiger’s Milk, however, is the perfect send-off. The initial high is definitely relaxing, but your mind is still active; sometimes you’re even more alert. An indica wave will hit soon after, but it’s much more of a smooth ride than a fast descent.

A pint of Guinness or Left Hand Milk Stout is tough to beat after a day out in the snow, but Tiger’s Milk warms me up more than any creamy booze could. Great for pain, anxiety or just becoming one with your couch, this gentle indica is one of the most nurturing strains I’ve come across. Just don’t mistake its kindness for weakness.

Looks: Despite being a heavy indica, Tiger’s Milk nugs are generally slim and long, but they can still be very dense. Flower color should be a murky forest green. Healthy trichomes can give it a golden hue when placed under the light.

Smell: Tiger’s Milk smells like an earthy, skunky granola bar, with hints of vanilla and a distinct finish that smells like sweetened condensed milk.

Flavor: Smooth and savory, just like the high. Hash flavors, most likely from its Bubba Kush genetics, hit you first, followed by earthy floral notes — similar to lavender — with a sweet vanilla aftertaste.

Effects: Tiger’s Milk’s effects are strong but hit you gently, swelling the head with uplifting creativity just enough to trick you into thinking you’ll be awake for the next ninety minutes. But the body melt takes over in about a half-hour, relaxing you to sleep without the stupefying head change that Bubba Kush can bring.

Home grower’s take: “I like this one a lot. I’ve never smoked Appalachia before, but its skunky, sharp qualities pair well with the hash and coffee flavors of Bubba Kush. I haven’t decided if it tastes more like vanilla or peanut butter — I’ve had cuts that taste like both — but whatever it is, it’s bomb. The nugs can be a little narrow for indicas, but the bud structure is dense, and the resin glands are bright like your other favorites. I always top it a lot during veg[etation], because it doesn’t grow much until flowering. Once you put it in flower, though, it’ll grow to over six feet tall sometimes. Yield is never much better than average, no matter how tall it is — but this isn’t something you grow for quantity.”