While music festivals resound throughout Colorado in the summer, once the temperature drops below freezing, there aren't a lot of places where you can enjoy live music outside, even though hard-core fans don’t mind enduring a little snow in order to hear their favorite bands. Fortunately, the coming months offer a handful of events that mix the great outdoors and great music. Here are seven of our favorites that you won't want to miss, all in chronological order.


Vail Snow Daze
Friday, December 8, through Sunday, December 10
Hailed as the largest early-season mountain bash in North America, Vail Snow Daze will include après-ski parties and free live concerts at night. While the roster for this year hasn't been announced yet, previous artists have included Michael Franti, Lettuce and Big Head Todd & the Monsters. It all takes place at Solaris, 141 East Meadow Drive in Vail; call 970-476-9000. 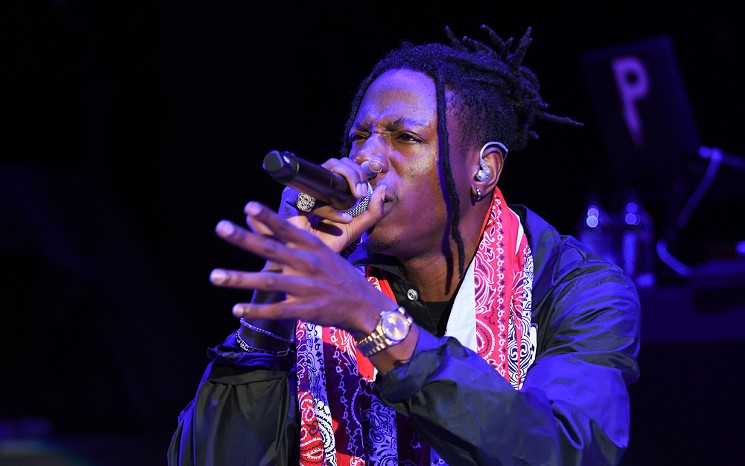 Joey Bada$$ played at last year's Dew Tour.
Miles Chrisinger
Dew Tour
Thursday, December 14, through Sunday, December 17
While the Dew Tour in Breckenridge is primarily a snowboarding and skiing competition, live music will rock throughout the weekend. Heavies including Joey Bada$$, A-Trak and D.R.A.M performed at last year’s event; this year will be headlined by the Floozies. All shows are at the Riverwalk Center, 150 West Adams Avenue in Breckenridge; find out more at dewtour.com.

Migos headlines New Year's on the Rocks.
Mathew Tucciarone
New Year’s Eve on the Rocks
Sunday, December 31
Over the past six years, Icelantic’s Winter on the Rocks has shown that it's indeed possible to draw people to Red Rocks in the dead of winter. Now Feyline and the folks behind Cervantes’ Masterpiece Ballroom are presenting the first-ever New Year’s Eve show on the Rocks, one with some of the biggest names in hip-hop, including Migos, Post Malone, Young Thug, Lil Yachty and Dizzy Wright. Red Rocks Amphitheatre is at 18300 West Alameda Parkway in Morrison; call 720-865-2494 for more information. Tickets are $175 at axs.com.

Lee Ann Womack
Ebru Yildiz
MusicFest
Thursday, January 4, through Tuesday, January 9
Now in its 33rd year, MusicFest brings more than fifty Texan and Americana bands to a big tent in Steamboat Springs, where the music will continue for six days. The next lineup includes Lee Ann Womack, Cody Canada & the Departed, Dirty River Boys, Jack Ingram and more, and the entire event is hailed as the largest group ski trip of its kind in the nation. All performances are at 2305 Mount Werner Circle in Steamboat Springs; find a schedule and price packages at themusicfest.com.

LCD Soundsystem performs at this year's X Games.
Miles Chrisinger
X Games
Thursday, January 25, through Sunday, January 28
The X Games are geared toward snowboarding and other action sports, of course, but music is also a big part of the festival. While there are outdoor concerts on Buttermilk Mountain, there will also be performances by LCD Soundsystem, Marshmello, Martin Garrix and Method Man & Redman at Belly Up Aspen — and to see LCD Soundsystem, which has sold out multiple nights at Red Rocks, play in the 450-capacity Belly Up is well worth the drive. For information on the shows on Buttermilk Mountain, call 970-925-1220; for Belly Up Aspen, 450 South Galena, call 970-544-9800. Tickets range from $35 to $1,000 at xgames.espn.com/aspen.

UllrGrass
elliotscrossroads.com
UllrGrass
Friday, January 26, through Sunday, January 28
Paying homage to Ullr, Norse god of winter, the music-and-beer-oriented UllrGrass festival returns to Golden for its fourth year. The bill is heavy on bluegrass, roots and funk, and includes such local and national bands as Euforquestra, Cornmeal and Coral Creek. There will also be a kids’ activity area, food vendors, artisan vendors, musician workshops and more. It's all at Parfet Park, 710 10th Street in Golden; tickets are $115 at ullrgrass.com.

WinterWonderGrass
Friday February 23, through Sunday, February 25
The three-day WinterWonderGrass festival returns to Steamboat Springs for a sixth year, bringing some of the state’s best bluegrass and folk talent, including Yonder Mountain String Band, Leftover Salmon and Trout Steak Revival. There will also be out-of-state acts, including Michigan’s Greensky Bluegrass and the Travelin’ McCourys, with two sons of bluegrass legend Del McCoury. WinterWonderGrass rolls out at 2305 Mount Werner Circle; tickets are $159 to $499 at winterwondergrass.com.

Looking for more to do? Visit Westword's calendar.