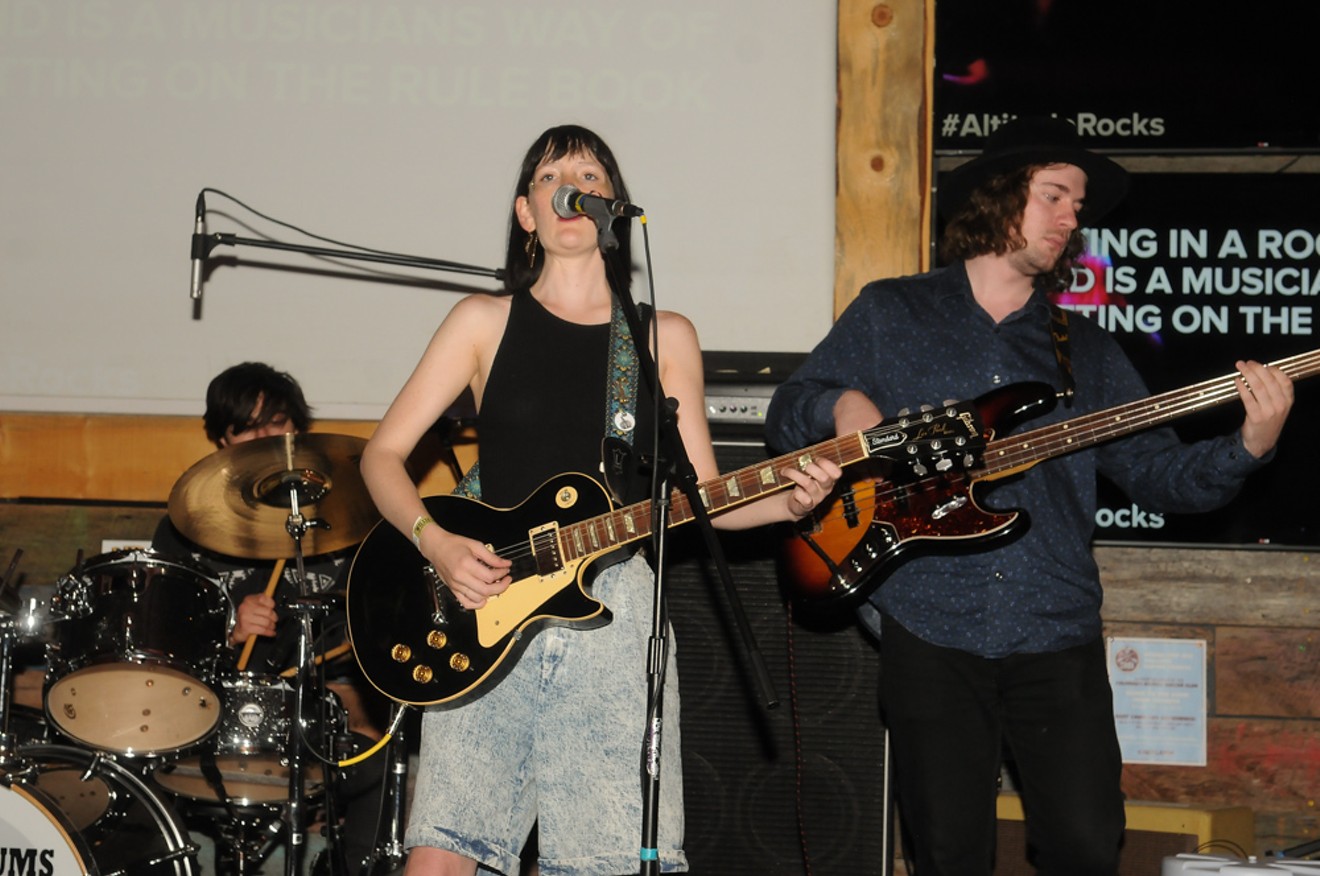 Friends and peers say he was a gentle soul who pushed people to do their best and to achieve more than they believed they could. 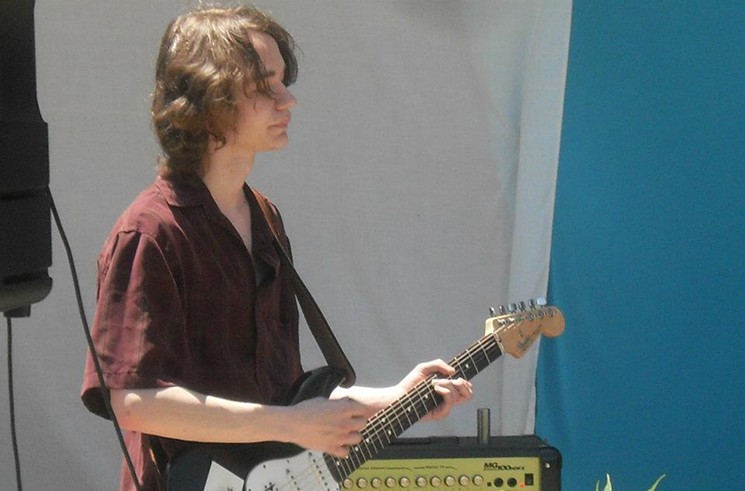 Ethan McQueen in 2012.
Linda Conrad
McQueen grew up in Arvada with his brother, Ethan, and their mother, Linda Conrad. Greg Wilson, McQueen's childhood friend and former bandmate in the post-punk outfit Spacesuits for Indians, says that McQueen started playing piano at age three and learned Scott Joplin's classic “The Entertainer” in its entirety.

Encouraged by their parents, particularly their mother, the McQueen brothers grew up teaching themselves music. Ethan, Kyle and their friend Julio Alejandro flunked the only guitar class they ever took for “non-participation, because they spent their time writing their own songs in another room," says Conrad.

“The teacher let them, because he said the kids played better than he did," Conrad adds. "He still had to fail them.”

Ethan and Alejandro formed the band Postal Holiday in 2008. When Ethan said he wanted his kid brother, Kyle, to join, Alejandro said, no way – at first.

“We got together, and Kyle blew me away with his playing,” Alejandro recalls. 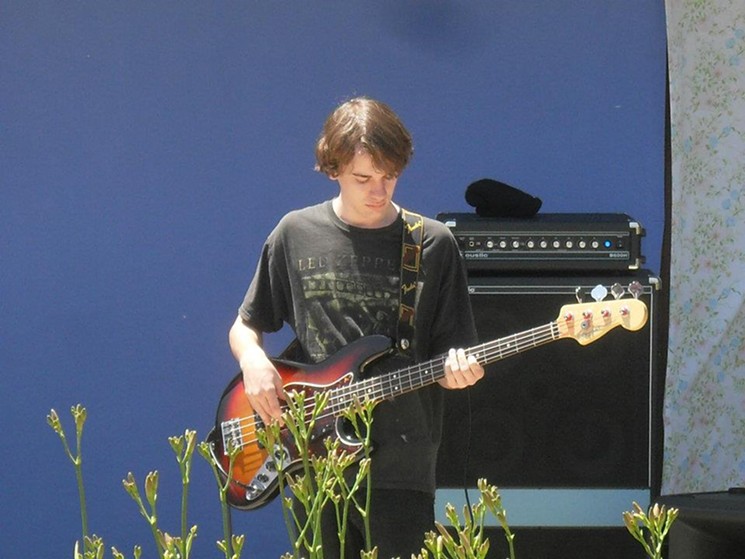 Kyle McQueen in 2012.
Linda Conrad
The three recruited their friend Patrick Mahoney to drum; the musicians bonded musically through a mutual love of Led Zeppelin, Joy Division, Sonic Youth, Nirvana and an eclectic array of other bands.

At first the musicians in Postal Holiday played a gauntlet of unfortunate shows before connecting with their natural peers, taking gigs at Dikeou Collection and the DIY space Unit E.

Postal Holiday, 2014.
Linda Conrad
Postal Holiday garnered a small local following and released four albums, including the strikingly sophisticated third effort, Dispersed Into the Stratosphere. Most of the band's releases were recorded with Fort Collins-based engineer Kris Smith, who knew how to shape their vision. 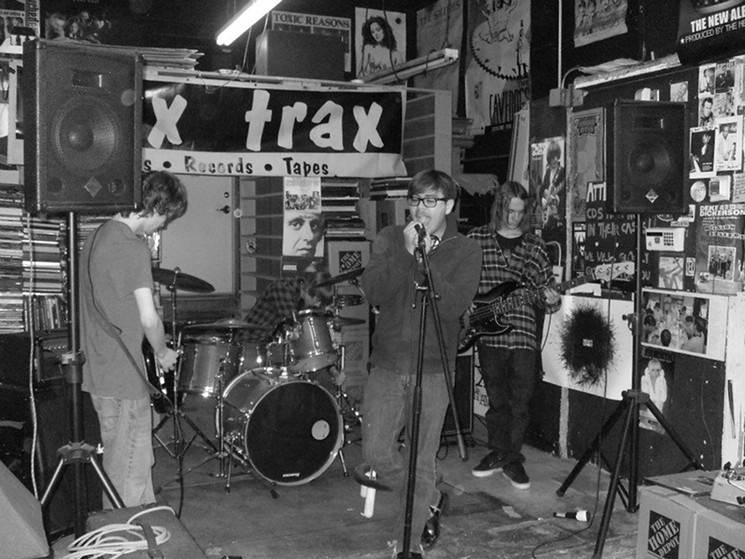 Postal Holiday at Wax Trax in 2012.
Linda Conrad
Toward the end of Postal Holiday's run, Wilson, who had already been jamming with Ethan and Kyle, joined the band. Wilson, Kyle and Alejandro went on to start Spacesuits for Indians; Ethan formed Live Nude Girls and then his current band, Galleries.

Spacesuits wasn't long-lived, but with that band, Kyle embarked on his first real tours to the Pacific Northwest. At a Lost Lake concert on November 7, 2016, Kyle met Mayory Pulido, who clicked with his friends and eventually became his girlfriend. The relationship outlasted Spacesuits, when the band amicably split in early 2017 so Alejandro could pursue his career as a painter. 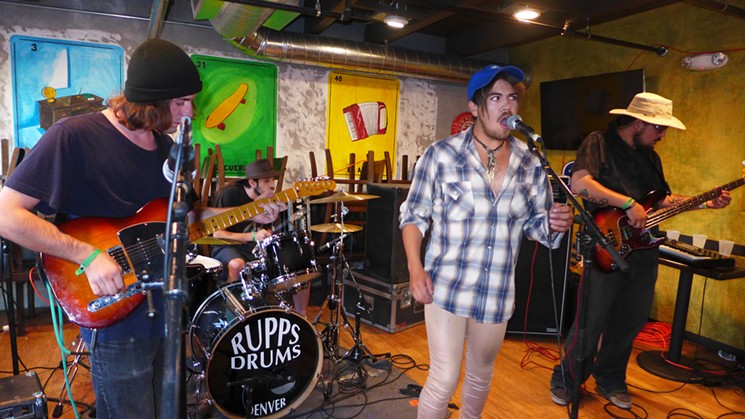 Spacesuits For Indians, July 2015.
Tom Murphy
In 2016, McQueen joined Ancient Elk. The band allowed him to play bigger shows, and on April 28, 2017, he performed his last time with the group, sharing the bill with Galleries at the Denver City Fest.

All of Kyle's bandmates respected his prodigious musical talent as well as his thoughtfulness and professionalism.

“I wouldn't have pictured going on tour. And he would tell us we had to keep playing the same songs, even if we were sick of them, because other people didn't know the songs yet, and they would catch on,” says Alejandro. “He was ecstatic about playing with Ancient Elk, because the group was playing bigger shows. He pushed everybody to be a better musician, and he made it effortless for you to play. He made everything sound right.”

“It wasn't for the fame,” says Wilson. “He wanted the freedom to play music all day, every day, and saw himself doing that.”

“Kyle was a gentle and incredibly intuitive guy,” says Cody Coffey of Ancient Elk. “[I knew him] since he was fifteen, and he was without a doubt one of the most talented young people in Denver's music community. He took our songs to the next level with his bass lines. We're sad we'll never make a record with Kyle, but we're going to dedicate this forthcoming album to him and his legacy.”

Ancient Elk drummer Trey Tafoya describes Kyle as his "rhythm section brother, a passionate soul who is undoubtedly still restlessly rocking. I connected with him on many bizarre levels, and we can still feel that he's with us. The recent show we played at Syntax, our first without him, was disturbing, because his presence was there, trying as much as possible to join the ensemble.”

In his 22 years, McQueen had an impact on musicians in the Denver music scene and beyond. People were touched by his gentle spirit, his unaffected kindness and his curiosity about others.

Although we'll never hear an official Ancient Elk studio recording with McQueen, the output of his projects that did record, whether Postal Holiday, Flowers of Mass Production or Spacesuits for Indians, is very much worth visiting and revisiting. 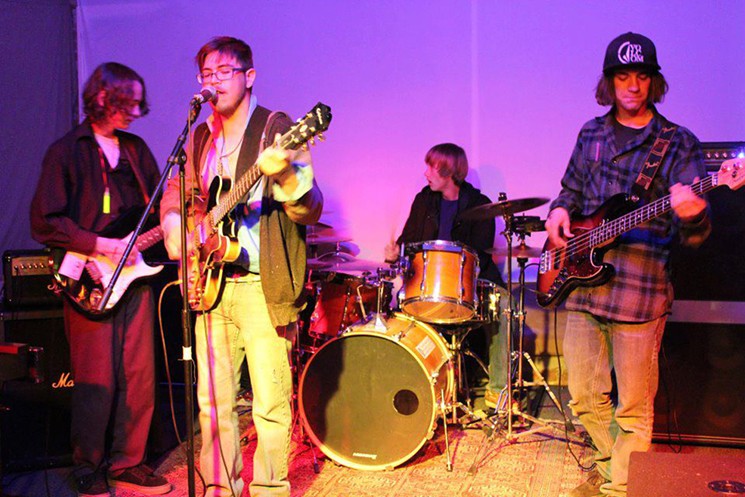 Postal Holiday in 2013.
Linda Conrad
Friends and family will celebrate Kyle's life and music on Thursday, June 8, at DIME, on the Auraria campus.