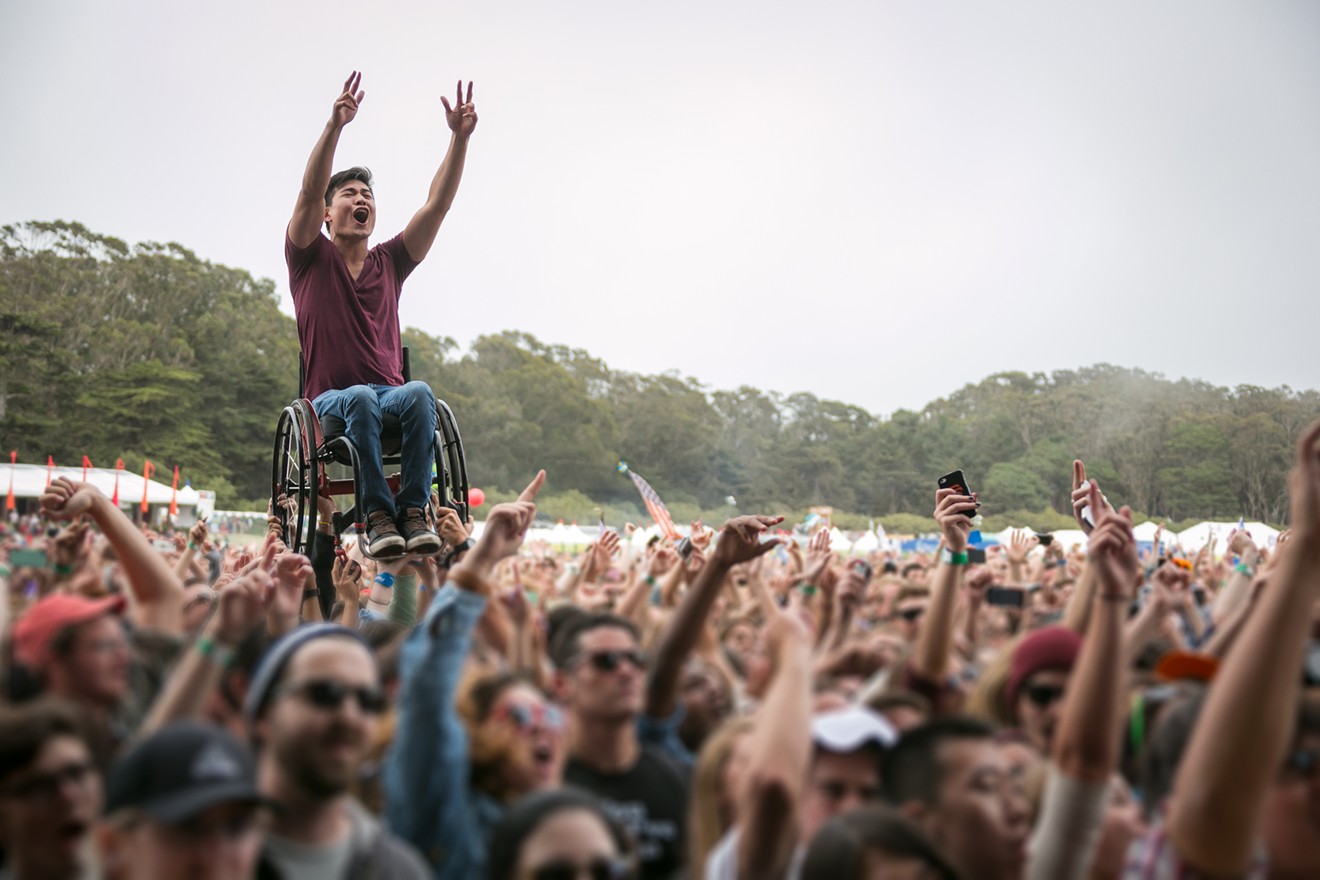 Shine Music Festival aims to make music festivals more inclusive and accessible. Josh Withers
While music festivals have made some strides over the years in terms of accessibility, the overall level of inclusion for people with disabilities is still low. Venues can be difficult to navigate for people in wheelchairs, the volume and chaos can be tough for those with sensory disorders, and deaf fans lack ways to enjoy live music.

Shawn Satterfield, president of Colorado nonprofit Shine Music, wants to change that. Her organization is reimagining how festivals can become more inclusive and accessible.

The nonprofit's first attempt, the Shine Music Festival, takes place at Levitt Pavilion on August 8 and will employ technology and venue design changes that remove barriers for concert-goers.

The event will include two stages and eleven acts spanning genres from electronic, country and bluegrass to pop. The lineup includes The Score, Neal Evans' Fro Down, Ryan Chrys & the Rough Cuts, El Javi, Photon, Float Like a Buffalo, Graham Good & the Painters, Damon Wood, Bottlerocket Hurricane, The Orcastrator and Desacore.

Satterfield says the festival will give disabled audience members the option to integrate into the crowd so that they can enjoy the full concert experience.

“There’s something that happens when the music on the stage connects with the audience,” says Satterfield. “If you’re off to the side, you’re on the outskirts of the bubble and you don’t share the same experience.”

Satterfield is a lifelong music fan who has traveled the globe to see concerts, catching 51 shows in 2019 alone. For most of her life, she says, “It never dawned on me that music is not accessible."

Then, in 2018, she saw a video of a U.K. busker who allowed a little girl who was blind and autistic to touch his guitar while he played. The effect calmed her, and her face lit up. Watching the video transformed Satterfield's relationship to music, and she obsessed over how concerts could be made more inclusive.

"When I had that awareness, I couldn't stop thinking about it,” she says. So she sought out a music festival that would be an experience all could enjoy, no matter their disability. She soon realized that there had never been a festival quite like what she was envisioning.

She recruited volunteers and organizations involved with the disability community and worked with them to create the Shine Music Festival. “We weren’t thinking about how things were done normally,” she recalls. “We had to make it up.”

Some of her ideas “read more like a sci-fi novel than a business plan,” she admits. But those fantasies have turned into a reality. Shine Music Festival incorporates cutting-edge technological innovations such as full-body sound and a bone-conduction dance floor.

Full-body sound is produced through a device roughly the size of an Altoids box that pulsates and carries the vibration of music into the human body via patches. The device is meant to help those experiencing deafness to immerse themselves within the concert experience. When Satterfield tried it, she recalls, “I felt every nuance of the sound,” she explains. It was so powerful, “I ugly-cried."

Through vibrations, the bone-conduction dance floor allows concert-goers to feel the pulse of music from the ground up. The first time Satterfield saw a bone-conduction floor, she witnessed two deaf girls dancing to music that she couldn’t hear herself. She was wowed by the invention.

But the Shine Music Festival isn’t solely about inclusive technology. Levitt Pavilion, an amphitheater at the bottom of a slope in Denver's Ruby Hill Park, will also be transformed through accessible pathways that are color-coded according to difficulty, much like ski runs. At a tent, certified therapists will be available to support people with sensory disorders and offer noise-canceling headphones. A sensory bus will serve as a peaceful oasis for those with autism or anyone who needs a break from the high-stimulation environment.

The event will also adhere strictly to its schedule so attendees can leave before it gets dark. And the fest, like most Levitt Pavilion concerts, will be free. When it comes to accessibility, a free show is crucial. “Seventy percent of people with disabilities are unemployed,” Satterfield notes, "and music is expensive.”

Creating the festival has been a learning experience for Satterfield. She's become more aware of small details that have an oversized effect on whether people with disabilities can enjoy live music. For example, all drinks at Levitt Pavilion will include lids and straws, because drinks without lids can be difficult for people with Parkinson’s.

Taking such accommodations into consideration will not only make the Shine fest accessible for those experiencing disabilities, but will also help people without disabilities become more aware of ways they can be more inclusive.

“That’s what 2020 did for a lot of us,” Satterfield says. “Most of us who had the privilege to have blinders on had them on. And when they came off, we realized things were not as equitable as perhaps they appeared to be from a distance. We now have the choice to put the blinders back on or leave them off and fight for change.”

Shine Music Festival runs from 1 to 7:30 p.m. on August 8 at Levitt Pavilion, 1380 West Florida Avenue. To learn more or order tickets, visit Shine Music Festival's website. Although the event is free, organizers encourage securing tickets beforehand.
KEEP WESTWORD FREE... Since we started Westword, it has been defined as the free, independent voice of Denver, and we'd like to keep it that way. With local media under siege, it's more important than ever for us to rally support behind funding our local journalism. You can help by participating in our "I Support" program, allowing us to keep offering readers access to our incisive coverage of local news, food and culture with no paywalls.
Make a one-time donation today for as little as $1.
Claire Duncombe is a Denver-based freelance writer who covers the environment, agriculture, food, music, the arts and other subjects.
Contact: Claire Duncombe