The Mystery of the Family Dog, Denver's Most Storied Rock Venue 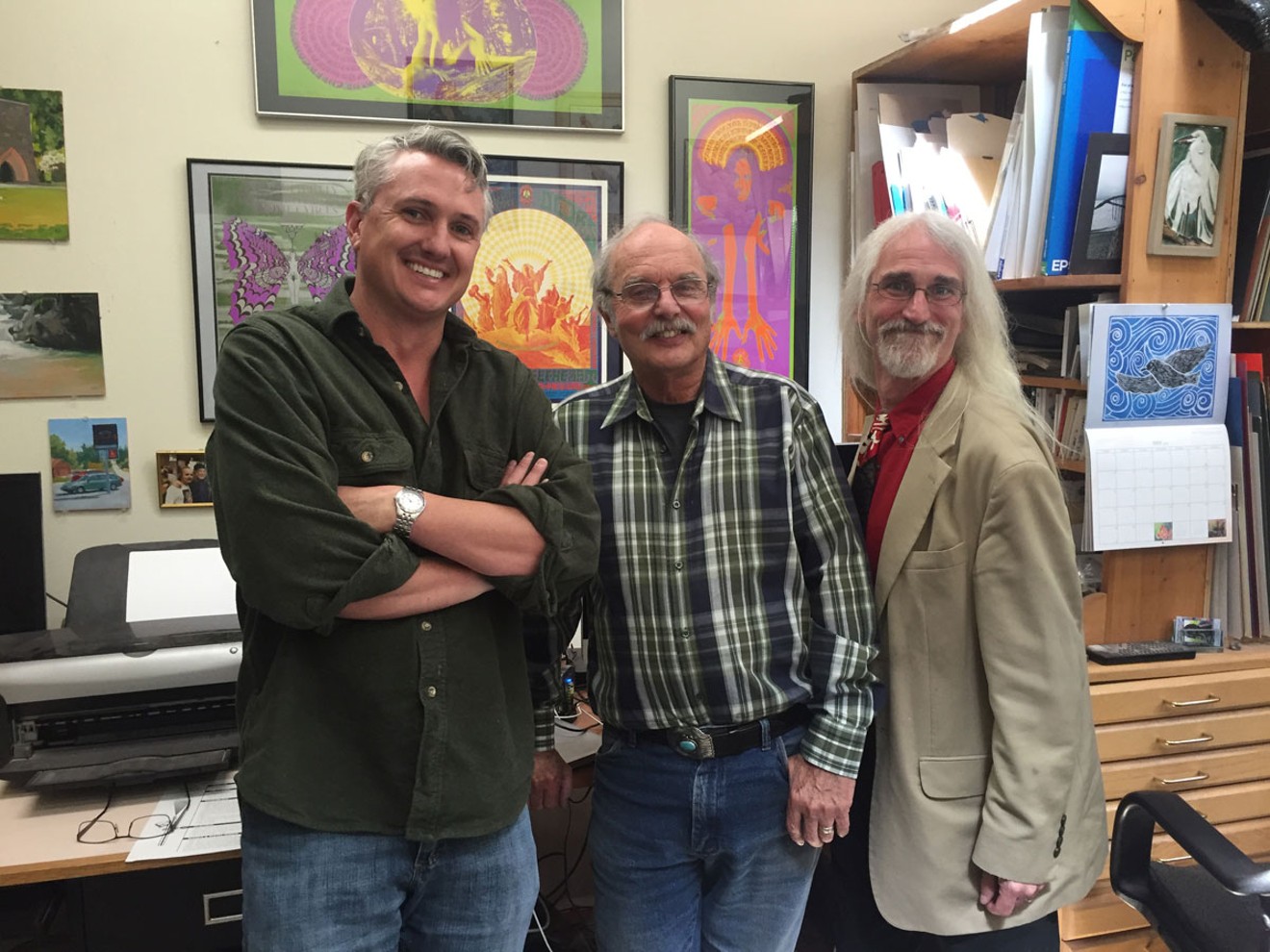 Filmmakers Dan Obarski (left) and Scott Montgomery (right) with artist Bob Schnepf. Margaret Joyce
The Family Dog may be the most influential rock-music venue in Denver history. Yet it’s also the most mysterious.

The club debuted just shy of a half-century ago, on September 8, 1967, and subsequently played host to a slew of seminal acts, including Jimi Hendrix, Janis Joplin, the Grateful Dead and more. But the Dog was put down in less than two years, and while its 1601 West Evans Avenue building still exists, the business currently operating there is PT’s Showclub Denver, a strip joint whose performers specialize in baring their bodies instead of their rock-and-roll souls.

Clearly, the space is very different now than it was in its psychedelic heyday, but specifics about the changes are scarce. According to Dan Obarski, who’s working with University of Denver professor Scott Montgomery to create The Tale of the Dog, a documentary expected to debut in 2018, the fiftieth anniversary of the venue’s demise, “we have three photos of the club, I think, but nobody has found photos or video from inside.”

Likewise, questions about authenticity remain about the small handful of recordings on YouTube that purport to have been made at Denver’s Family Dog, including a take of “Light My Fire” by the Doors. And while sixteen eye-popping posters for gigs at the venue have survived, Montgomery concedes that their existence falls short of proof that the concerts they touted actually happened.

“The posters don’t lie,” Montgomery stresses, “but history can kind of pull the rug out from under them.” As an example, he points to the placard advertising appearances by Canned Heat on October 20 and 21, 1967 — but before the blues-rockers could take the stage on October 21, they were busted for marijuana possession.

Obarski calls this incident “the dramatic lynchpin” of the movie that he and Montgomery are making — “but the more we’ve gotten into this story, the more levels we find. It’s not just rock-and-roll savagery, and it’s not just the hippies versus the straights. There’s the Family Dog philosophy. There’s the musical legacy. There are the posters. And there’s Barry Fey,” a concert promoter who leveraged the experience he gained at the Family Dog into a Colorado entertainment empire.

As such, Montgomery sees the Family Dog as much more than just a rock club: “I would say it is absolutely the foundational seed of Denver’s status as a hip city.”

This cool factor was imported from San Francisco, where the late Chet Helms founded Family Dog Productions in 1966. Helms and associates began staging what the Family Dog website calls “weekly dance hall revues [that] gave local bands a forum to perform their groundbreaking music.” And since those groups included the Jefferson Airplane, the Dead and plenty of other sonic adventurers, the Family Dog quickly became a phenomenon.

Not that the enterprise ran smoothly. “Everybody loved Chet, but he wasn’t a businessman,” maintains Obarski, who believes, as does Montgomery, that the idea of franchising the Family Dog was born of financial instability.
Enter Fey, who shared the Family Dog Denver’s origin story with us as part of “The Long Goodbye,” an article published in August 1997, when he sold his share of Fey Concerts to onetime rival Universal Concerts. He made the announcement at the site of the Family Dog.

Fey, who died in 2013, was a University of Pennsylvania dropout when he promoted his first concert, starring a cover band called Baby Huey and the Babysitters, on Easter Sunday 1965, in Rockford, Illinois.

By 1967, Fey was based in Colorado but looking for other worlds to conquer. Then, that April, he learned that Family Dog Productions was soliciting tapes and decided to head to San Francisco to pitch a Denver band called Eighth Penny Matter. He was granted an audience with Helms and his right-hand man, Bob Cohen, and even though they weren’t wowed by the recording, they clicked with this cocky kid. So when Fey learned that the Byrd, a teen club at the 1601 West Evans address, had closed, he called Cohen and pitched a Family Dog spinoff. Cohen promptly flew to Denver, and within a matter of weeks, Fey was the overseer of a very trendy affiliate.

In addition to giving Fey access to some amazing musicians, the Family Dog crew also enlisted innovative poster artists such as Bob Schnepf, who’s already been filmed for the documentary, and Diogenes Lantern Works, a pioneering lighting troupe; DLW’s Marc Arno is also scheduled to appear in the movie.

Fortunately, several of the main figures in the Canned Heat bust are still around, too. But band-member/bassist Larry Taylor and John Gray, whom Obarski calls the “self-appointed” Denver police detective in charge of cracking down on the hippie menace, told him and Montgomery very different stories about what happened.
“The police’s version is they got a tip from an informant and they went to the band’s hotel, where they found marijuana and hauled them off to jail,” Montgomery notes.

“And Canned Heat’s version is, ‘We were hanging out, and we wouldn’t have had marijuana there because we knew better — and we would have smoked it if we’d had it,’” Obarski recounts. “They say it was planted on them by the informant.”

Whatever the case, the musicians had to hawk the rights to their next album for bail money, thereby losing the revenue for “Going Up the Country,” a Woodstock Nation theme song, until last year, Montgomery reveals. They expressed their anger in a tune called “My Crime,” which contains the couplet, “’Cause the police in Denver/Lord, they don’t want none of them longhairs hanging around.”

Montgomery and Obarski see the Canned Heat arrest as the beginning of the end for Denver’s Family Dog. “On New Year’s Eve, the Doors did the final concert under the San Franciscans,” Montgomery says. A smattering of shows “that were advertised as the Family Dog, even though the Family Dog was gone” continued into 1968, he goes on, “but by summer, there were no more. It just sort of petered out.”

Even though Obarski grew up in Denver, he didn’t learn about the Family Dog until he was in his thirties. Then, in early 2015, he attended an exhibition of the club’s posters at the Byers-Evans House Gallery and met Montgomery, the event’s curator. They instantly connected, and within months, they’d decided to make a documentary about the Dog. Neither has a background as a filmmaker; Montgomery’s focus is medieval and renaissance art, and Obarski works for a Medicaid health plan and is a licensed counselor. But, Montgomery notes, “we didn’t have time to wait for some filmmaker to come along.”

“After we decided to do this, it seemed like someone on our possible interview wish list died every month,” Montgomery adds.

Thus far, the two have already collected more than twenty hours of footage based on interviews with at least sixteen sources thanks to “two very generous donors,” Obarski says. “They’ve made us whole for two and a half years of work.” But the pair will need more money to complete a final cut and secure the rights for as much music as they can. They’ll likely rely on material from local acts, including Lothar and the Hand People, electronic-music icons from Denver who played at the Dog, but they’d like to be able to use “My Crime” — and Montgomery doesn’t want to stop there.

Or maybe more than one somebody. Thanks to a partnership with Colorado Public Television/Rocky Mountain PBS, which has expressed interest in airing the documentary once it’s completed, all donations to The Tale of the Dog are tax-deductible.

For more details, visit thetaleofthedog.com, which sports a teaser trailer with comments by Twist & Shout Records owner Paul Epstein and G. Brown of the Colorado Music Hall of Fame, an organization that also supports the project.

The level of enthusiasm for the film is heartening to Obarski. “The way this has unfolded, the universe wants this thing done,” he says.

For his part, Montgomery is excited by the opportunity to unearth at least some of the secrets buried with Denver’s Family Dog. “The ground-level archeology just isn’t there,” he acknowledges. “So we’re going to try to set the record straight.”