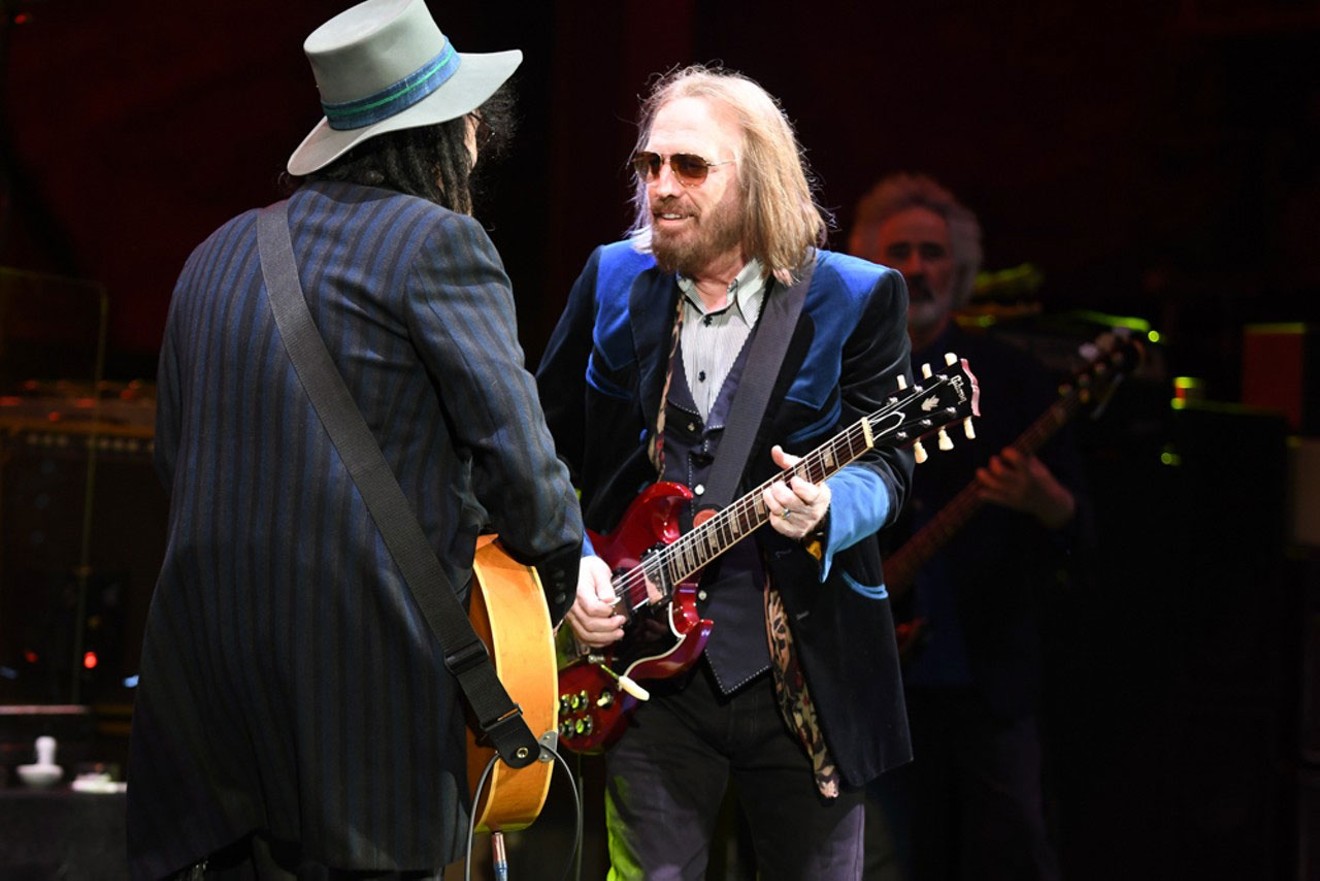 Tickets for shows like Tom Petty’s are hard to come by because they’re in such high demand. Miles Chrisinger
God, it’s such a drag to have to live in the past.

This Friday, October 6, the Live! On the Lake concert series will host A Toast to Tom, a tribute to Tom Petty, featuring cover band the Tom Petty Project. The show, at the Marina in Cherry Creek State Park, will also spotlight Adrienne O as Petty collaborator Stevie Nicks. The band promises to be dressed in an “authentic wardrobe” and use plenty of “vintage instruments.” Based on the loving rendition of “American Girl” on the Tom Petty Project (not to be confused with the Petty Project) website, the quality of the covers should be high, and it’s a worthwhile tribute to an artist whose work meant so much to so many.

Yet what rings out most clearly about this tribute to Tom Petty is that we never needed one before. Until this moment, Petty never left fans wanting more. He and the Heartbreakers would always come back, release another album with at least a few first-rate songs. More important, the band would roll through your town again for a time-stopping performance.

Tom Petty died on Monday, just a few days after the Heartbreakers wrapped a massive, 53-date fortieth-anniversary tour. This is indicative of the band’s touring schedule for, oh, the last four decades, give or take a few years. Petty never manufactured fan desire through scarcity. He kept writing and recording, kept touring, kept delivering excellence summer after summer, show after full-throttle show. Name another music icon with that kind of generosity – and don’t mention the middle-aged road warriors propping up the body night after night, or those embarking on never-ending jazzy vision quests (I’m looking at you, Zimmy).

Petty not only stayed out there; he stayed good. He never lost his signature voice. He never lost his ability to stand up, move around a stage, play a guitar or lead a band and direct a crowd for two hours with no breaks. Up until the last Heartbreakers show at the Hollywood Bowl, listeners didn’t buy tickets to watch a palimpsest of a rock star they loved in their youth, to squint and pretend that the musicians on stage sounded like what they heard on classic-rock radio. If the Heartbreakers were an unknown band, any spectator in the last few years would note the power, energy and talent – not even talking about the songs – and say, Wow, those guys really have something cooking. Petty showed signs of age, but he still had it.

Petty never became a nostalgia act because he never parodied himself. In the ’90s, his new songs enjoyed radio play on both classic-rock and alternative-rock stations – not because he reinvented himself, but precisely because he stayed close to his core while leaving room to grow. In 1986, for example, during the Heartbreakers’ first decade of mass popularity, already a longtime arena headliner, the band decided to open for and then back up Bob Dylan on tour. Petty’s and the bandmembers’ ambitions remained tied to their work, not to their own myth, and for that reason, the songwriting and musicianship remained in top form. Petty was often out of step with the fleeting zeitgeist, and so he was never trapped in amber when the moment inevitably passed.

In so many ways, Tom Petty got lucky. He lived. When Petty’s early hero Elvis died, the King had already been going through the motions, impersonating himself for years. The world responded to his excess and downfall with folk art, absurdity, obscenity and, of course, parody. We needed it, since the songs could not fill the gap left by the icon. (These days we feel such lack for Michael Jackson that the earth had to cough up Bruno Mars, but even he’s not enough.) Yet despite addiction, divorce, ego, fire, lawsuits (fighting against rising album prices, of all things), a smashed hand (self-inflicted), fame, fatigue, and the tragic loss of bassist Howie Epstein, Petty stayed alive, and so got to control his narrative.

He also managed to keep his life almost totally private without being a recluse. Fans didn’t have to fill the void with themed club nights, as we did with Bowie and Prince. Petty was a genius who stayed connected. He never disappeared from concert-goers, recording and performing music with dependable vibrancy. So listeners got to fall in love with later songs like "Walls (Circus)," which we know sounds as indelible as Damn the Torpedoes. We know he hasn't worn the top hat in decades. And we know that the Heartbreakers play the hits not out of nostalgia, but because those songs are fucking brilliant, sterling, timeless art.

I’ve been lucky, too. I’ve gotten to sing along with Petty, in person, at every stage of my life, most recently in 2016, with Mudcrutch at the Ogden, closer than I ever expected to get. Through my own heartbreaks, grief and growth, Tom Petty songs have been the constant touchstones. These songs don’t remind me of the past; they remind me of myself.

Tom Petty belonged utterly to himself. But when you’re dead, folks can say whatever they want about you, trap you in amber or in a top hat. You can’t take the mic and prove them wrong.

So for all the current and future Petty impersonators and Heartbreakers cover bands out there, please: The greatest tribute you can pay now to Tom Petty is to make this music your own.