How a Colorado Senator Wound Up Posing With a White Supremacist

A photo featuring Joshua Yeakel and Colorado Senator Kevin Lundberg from July 4. File photo
Update below: A photo has surfaced in which state senator Kevin Lundberg, a Republican from Larimer County, is seen alongside Joshua Yeakel, a reputed neo-Nazi with ties to William Scott Planer, an alleged white supremacist who was arrested in Colorado Springs this summer. In the image, taken at a pro-Donald Trump rally in July, Yeakel is wearing a T-shirt that references The Daily Stormer, a website that appeals to extremist groups. But Lundberg says he had no idea about Yeakel's background or the meaning of the shirt when he smiled for the shot, and rejects any suggestion that he was consciously cozying up to the alt-right.

"If you look carefully at the picture, you'll notice the Capitol in the background," he notes. "It's a place I'm at a lot, and if somebody comes up to me and says, 'May I take a picture?,' I say yes. And I don't scrutinize what their clothing looks like."

Yeakel has been linked to white-supremacist activity on Capitol Hill. A March 21 post by Rocky Mountain Antifa notes that Yeakel had posted on Daily Stormer forums as "K.R.Kroenen, a reference to a Nazi character in the comic series Hellboy" — although the pseudonym was changed to K.K.Kroenen (to make the initials "KKK") on the caption to the photo with Lundberg; a larger version is seen below. The item adds that Yeakel "used to be involved in the Occupy movement and Denver's squatting scene, but after a recent four-month stay in jail decided to convert to neo-Nazi ideology."

Rocky Mountain Antifa also named Planer as a onetime Capitol Hill white supremacist — but he first came to the attention of the mainstream media in these parts after a security camera captured video of two individuals affixing stickers reading "Fight Terror, Nuke Israel" to the door of the Chabad Lubavitch Jewish Center in Colorado Springs on June 10. 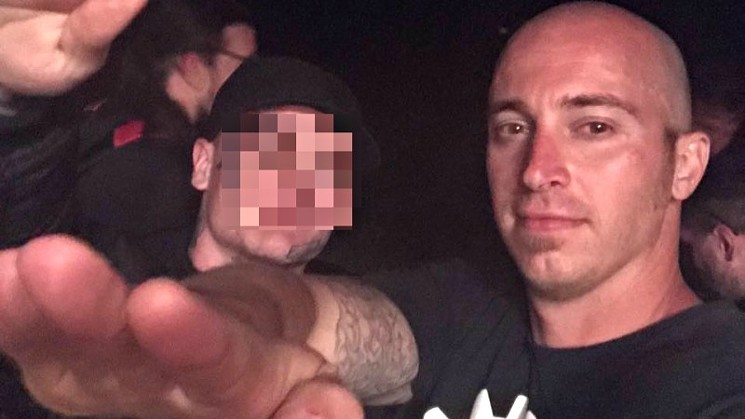 A Facebook photo of William Scott Planer saluting at a white-supremacist rally in Kentucky this past April.
Facebook
The clip was subsequently released to news agencies such as KRDO-TV, and the publicity was likely key to the misdemeanor vandalism arrest of Planer on July 14. He was subsequently held on a $500,000 bond related to a felony charge in California, where he allegedly attacked a protester during a white-supremacist rally last year.

In a blog post about this development, Denver's branch of the Anti-Defamation League provided more background on Planer and his allegedly radical activities.

"Originally from Sacramento, Planer has been on the ADL’s Center on Extremism’s radar for a number of years," the item states. "He is associated with at least two known white supremacist groups, including the Golden State Skinheads (GSS), a California-based racist skinhead crew founded in 2003, and the Traditionalist Workers Party (TWP), a white supremacist group led by Matthew Heimbach and Matt Parrott.... Planer also traveled to Pikeville, Kentucky, to attend an April 29, 2017, white supremacist rally organized by the TWP and the neo-Nazi National Socialist Movement. During the gathering, Planer, wearing a shirt bearing the TWP emblem, repeatedly gave the Nazi salute."

On top of that, the ADL alleged that Planer "was in Boulder, Colorado, rallying with the Proud Boys, an alt lite group that embraces misogyny and xenophobia and abhors 'political correctness' and the left." 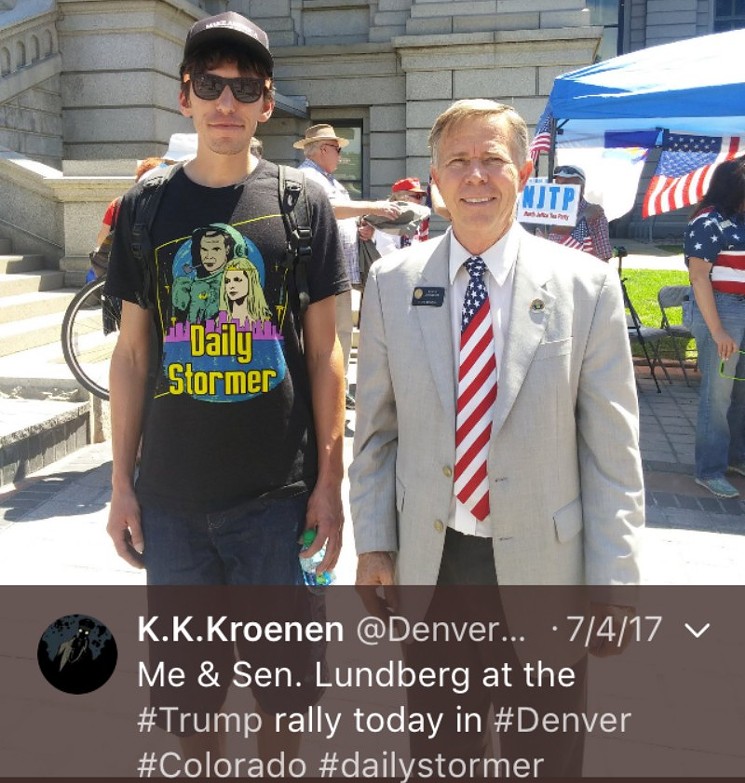 This version of the photo at the top of the post includes the name K.K.Kroenen, a Hellboy reference modified to form the initials KKK.
File photo
Yeakel was also linked to the Proud Boys rally. A May 28 Rocky Mountain Antifa salvo describes him as "a neo-Nazi who enjoys spending his time advocating for the extermination of homeless people and threatening children on the forums of the Daily Stormer, a neo-Nazi website." And just last month, the Colorado Springs Anti-Fascists, a group recently profiled in this space, referred to Yeakel as the "current lead organizer" of the Traditionalist Workers Party.

When asked about these organizations, Lundberg insists that "I don't know anything about them." About a month ago, he says, "somebody tried to make a deal" out of the photo with Yeakel, and afterward, "I learned that apparently that T-shirt reflects some group that's out there somewhere. But that's all I know."

Like President Donald Trump in his first comments about violence at a white supremacist rally in Charlottesville, Virginia, Lundberg doesn't use questions about the photo as an opportunity to denounce any of the outfits with which critics say Yeakel is affiliated or the alt-right in general.

"I don't have any comment about things I don't know anything about," he notes. "The terminology people assign to different groups, like right wing or left wing — I often find they fall well short when it's some odd group that has a really weird perspective on what's happening." But after the first inquiry about Yeakel and his T-shirt, "I remember saying, 'It's probably not so much a group.' Because when you dig down into it, it could be some blogger from an area who had a few people who bought his T-shirt. But I don't know. Honestly, it's far away from me." 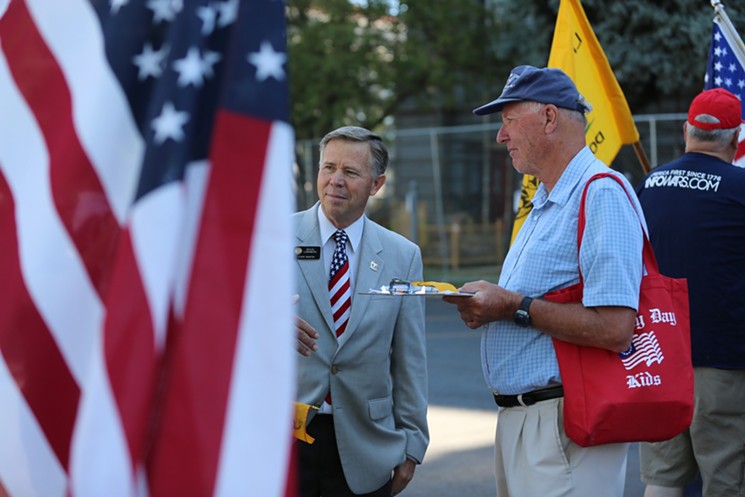 Another photo of Senator Kevin Lundberg at the July 4 pro-Trump rally.
Photo by Brandon Marshall
At the same time, Lundberg isn't about to change his philosophy when it comes to posing for photos.

"I'm guilty of allowing people to take a picture with me, and I think it's an elected official's responsibility to do things like that. During the special session on Monday" — the one involving a failed attempt to fix a drafting error related to marijuana taxes — "two couples came up to me: one from England, the other one from Wales. I brought one of them onto the Senate floor before the session to show them around, and I have no idea about them, or if they could turn out to be an odd something. But I believe in being friendly to people who come to view our Capitol."

In Lundberg's view, "it's interesting when somebody tries to throw something up and associate me with something — and there's just nothing there."

Nothing but a photo that shows him shoulder to shoulder with a very controversial figure.

Update: On October 12, nearly a week after the publication of this item, Westword received the following email from a representative of the Colorado Proud Boys: "In your October 6th article about Joshua Yeakel, you cite the ADL article about William Planer at the Proud Boy's Boulder rally. In the article, you neglect to mention the part where we specifically disavowed Planer while at the event, both privately, and publicly. The ADL and Southern Poverty Law Center specifically edited their article to mention that after video was provided. As for Yeakel, he was never a friend of Proud Boys. He showed up without wearing or saying anything provocative to anyone. Had we known he was with the Daily Stormer, he would have gotten the same treatment as Planer. I'm hoping you follow in the steps of the ADL and SPLC, who clearly don't have a high opinion of our group, and edit it to make it clear that none of the guys from the Daily Stormer have been welcomed by the Proud Boys."