On the Heels of DougCo Deputy Shooting, PTSD Support for Police Coming in July Those were the last words from the Douglas County Sheriff’s Office at a two-and-a-half-hour memorial service on January 5 for Deputy Sheriff Zackari Spurlock Parrish III, who was fatally shot on New Year’s Eve while responding to a disturbance call in Highlands Ranch. Parrish's memorial service began with a ninety-minute-long motorcade that concluded at Cherry Hills Community Church. Families with children waited by the roadside in the brisk winter morning just to watch the motorcade and blow kisses. More than 1,200 people tuned into a live stream to share their condolences and honor the memory of a man whom many consider a hero.

Four deputies and two civilians were wounded in the shootout, during which gunman Matthew Riehl reportedly fired off one hundred bullets when officers responded to a disturbance call that Riehl made to 911. Riehl was killed by a member of the SWAT team after the ninety-minute altercation.

The four deputies face more than just the burden of physical wounds. The emotional toll of the incident, in which the deputies lost one of their own, will weigh on them forever.

Come July 1, they will be eligible to file a workers' compensation claim for post-traumatic stress disorder.

Legislators passed HB 17-1229 in 2017, amending the state's workers' compensation law and making it possible for Coloradans to file such claims for PTSD, even if the issue arose within an employee’s usual work experience. Previously, any mental impairment that developed as a result of normal work duties was not covered by workers' compensation because those stressors were considered part of the job. The new bill creates a narrow window for those who regularly witness death and violence as part of their day-to-day duties — law enforcement and other emergency responders — to file claims of mental impairment, which explicitly includes PTSD, with the support of a licensed psychologist or psychiatrist. 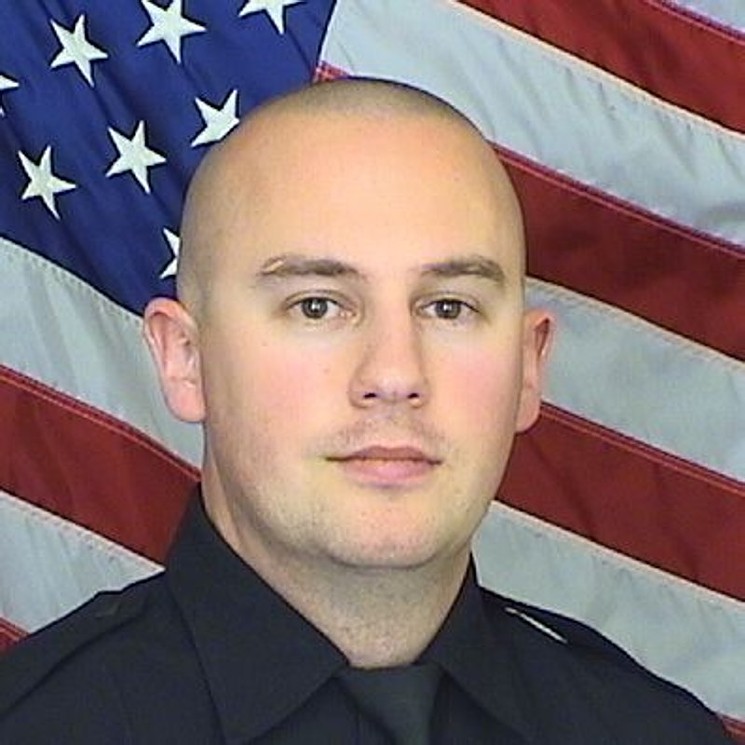 Zackari Parrish
Douglas County Sheriff's Office
The state's Fraternal Order of Police has been a driving force behind the bill since its first iteration in 2014, which it helped draft.

"There were things I experienced and saw that no person should have to experience or see. Knowing there is psychological and emotional support makes a difference. It made a difference for me," says Representative Jonathan Singer, a Democrat from Longmont and a former child-protection caseworker. Singer introduced the bill during three legislative sessions before it was finally approved last year. "I spent a lot of time going out with police officers to the scenes of crimes. I've got a soft spot in my heart for them."

PTSD and other mental illnesses have taken a toll on the state's emergency responders. Between 2004 and 2014, Colorado lost 130 personnel to suicide, including law enforcement officers, firefighters, dispatchers and emergency medical services personnel. A 2015 survey in the Journal of Emergency Medical Services found that 86 percent of EMS personnel reported critical stress, either built up over time or as a result of a single traumatic event, and 37 percent contemplated suicide. That last statistic is more than ten times greater than it is for the average U.S. adult.

The Douglas County Sheriff’s Office contracts with Nicoletti-Flatter Associates to provide counseling for officers who need mental or emotional support, says DCSO deputy and spokesman Jason Blanchard. PTSD sufferers in Colorado have been able to seek medical marijuana treatment as of last June; the mental impairment was added to the state's list of qualified conditions after eleven years of lobbying

The fiscal note for HB 17-1229 indicates that the state's Workers' Compensation Fund denied 110 claims in the past five years for mental impairment within the normal course of duties. The average claim cost was $35,000. The state program is self-funded and managed by the Colorado Department of Personnel and Administration.

“The problem we were trying to solve is, you’re a police officer and something like Douglas County happens to you — judges can look at the situation and say, ‘This is awful and you have post-traumatic stress disorder, but part of your job is to be exposed to violent events…so we can’t grant you workers’ compensation.’ My bill changed that," Singer says.