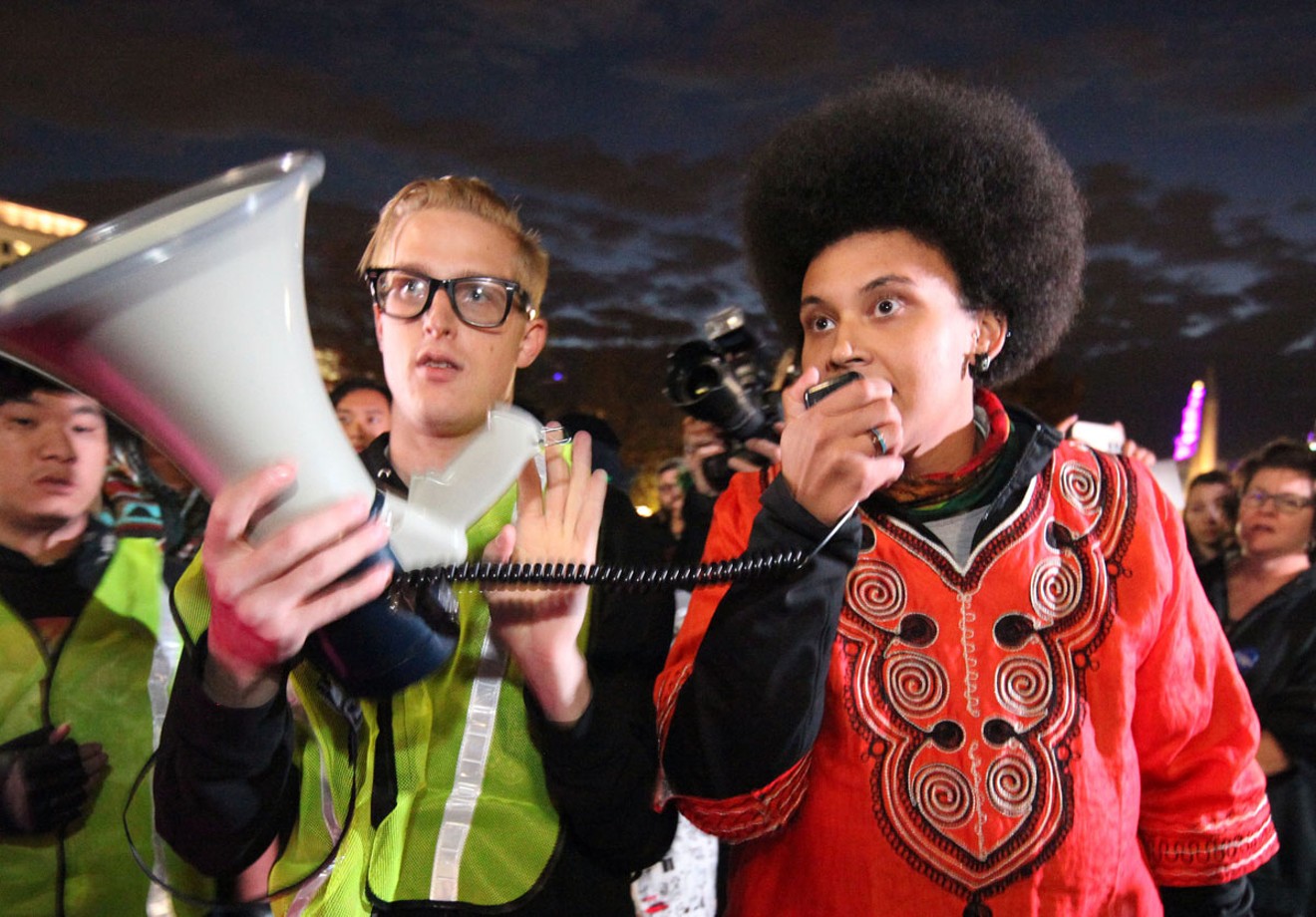 Dezy St. Nolde, aka Queen Phoenix, thinks her post-election protest made her a Denver Police Department target. Anthony Camera
Dezy Saint-Nolde, better known by her activism name, Queen Phoenix, has emerged as a prominent organizer of protests and demonstrations in recent months. These included the thousands-strong November 10 protest against Donald Trump's election, the February 18 Defend our Constitution march, a health-care rally on February 25, and a Demand Russia-Trump Ties Investigation march on March 18.

But Phoenix also believes that her activism made her the target of an undercover Denver Police Department investigation in which she was arrested and charged for offenses related to marijuana.

In a January cover story in Westword concerning DPD's social-media surveillance and how it related to the department's old “Spy Files” program, Phoenix shared her experience of having her house raided by cops in December on charges that she was distributing marijuana without a license. One of the bedrooms in Phoenix's home after the DPD's search.
Courtesy of Dezy St. Nolde
Phoenix asserts that she was under the impression — with guidance from lawyers — that she could gift up to an ounce of marijuana to clients in return for suggested donations.

The Denver District Attorney's Office does not see it that way; Phoenix is facing five felonies and three misdemeanors, all marijuana-related.

On Tuesday, March 21, she pleaded not guilty to those charges.

A jury trial is set to begin on April 27. Phoenix will appear with a co-defendant who was with her in her car when an undercover cop collected marijuana from her in December. 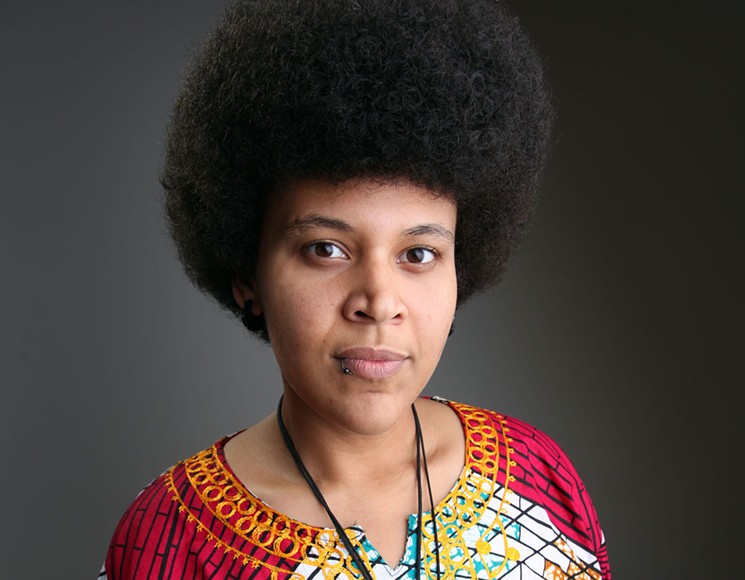 Dezy St. Nolde, aka Queen Phoenix.
Anthony Camera
Outside the courtroom on Tuesday, Phoenix said that she plans to fight all of her charges.

“I know that I was attacked for my activism," she maintains. "Most people see marijuana as medicine. We're in Colorado, and this shouldn't be happening, because it's not like we had 200 plants and were running an illegal operation.”

She recently obtained a copy of the arrest warrant that a judge signed in December authorizing entry into her home. The inventory of the items that the DPD took is included at the bottom of this article.

“The report doesn't talk at all about my activism,” Phoenix notes, “which is upsetting, because [the undercover cop] was witnessed at my [protest] events."

In the affidavit, Officer Jessica DelaRow of the Vice and Narcotics Bureau notes that, "On December 7th, 2016, your affiant received information from a law enforcement source that 'Dezy Saint' on Facebook was selling marijuana."

DelaRow says she found online postings that “included a menu that featured products and prices (Ex: edibles, capsules, cooking oil, topicals/salves and pre-rolled joints) that were available for a 'donation.'"

Later, when DelaRow began communicating with Phoenix and an associate, DelaRow quotes Phoenix's associate as saying “that she and Dezy have been 'doing this illegally for four years, and legally here in Colorado for a year and a half.'"

Phoenix says she has seen a heavy police presence at all of the protests that she continues to organize.

“For a while, this whole situation intimidated me from doing any activism. But I'm really trying to find comfort and trust again, because if I gave in and stopped doing it, I'd be letting them win,” she says. “I'm continuing to stand up for people and giving them a voice against injustice.”

Her next event is the Impeach Trump Now! rally and march — which she co-organized with Community for Unity — held on Saturday, March 25, at Civic Center Park at 11 a.m. 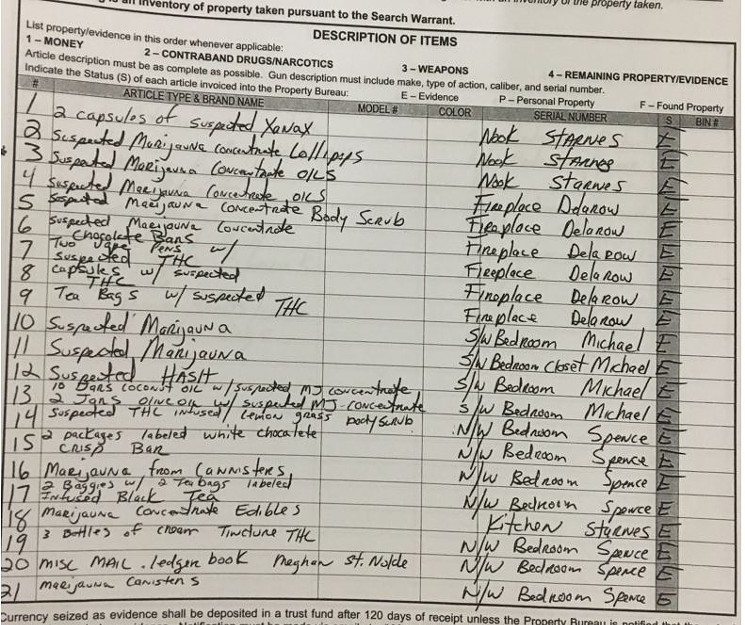 An inventory of items taken during the search of Queen Phoenix's home in December.
Public records
click to enlarge 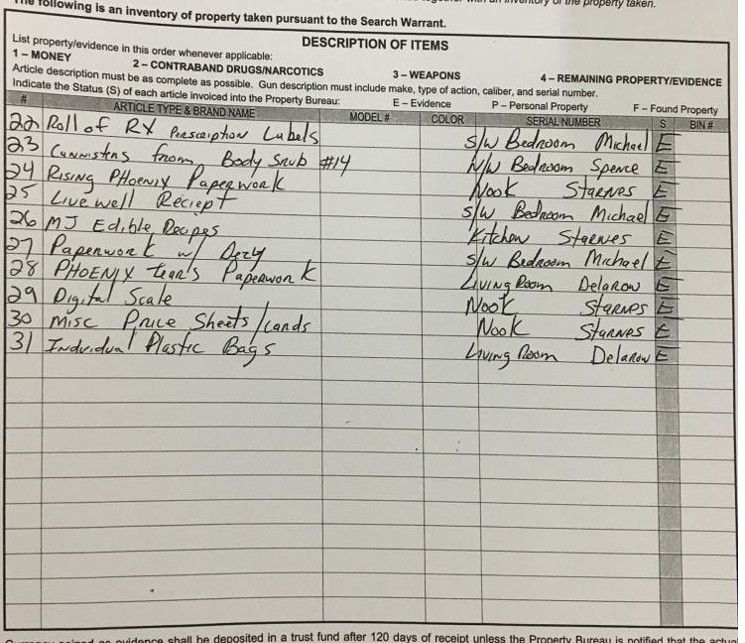 An inventory of items taken during the search of Queen Phoenix's home in December.
Public records
KEEP WESTWORD FREE... Since we started Westword, it has been defined as the free, independent voice of Denver, and we'd like to keep it that way. With local media under siege, it's more important than ever for us to rally support behind funding our local journalism. You can help by participating in our "I Support" program, allowing us to keep offering readers access to our incisive coverage of local news, food and culture with no paywalls.
Make a one-time donation today for as little as $1.