A photo of Denver-area storms tweeted by @MrTwisterChaser in May 2014. File photo
Given the horrific damage wreaked upon Texas, Florida and Puerto Rico by recent hurricanes, those of us who reside in Colorado may think we're relatively safe from Mother Nature at her most extreme compared to most places in the country. But a new study suggests that we're living in a dream world. The figures show that five counties in Colorado, mostly along the urban corridor, are at very high risk of housing damage from natural hazards, with Denver listed as the sixth-most-imperiled major city in the country by this standard.

The information comes from ATTOM Data Solutions, which has just released its 2017 U.S. Natural Hazard Housing Risk Index, a report accompanied by a heat map accessible below. For the report, ATTOM notes, the site "indexed natural hazard risk in more than 3,000 counties and more than 22,000 U.S. cities based on the risk of six natural disasters: earthquakes, floods, hail, hurricane storm surge, tornadoes and wildfires."

Denver, and Colorado as a whole, is less jeopardized by three of these hazards — earthquakes, floods and hurricane storm surges — than numerous U.S. cities, and the danger from wildfires doesn't top ATTOM's charts, either. However, plenty of places in the state can be hit by tornadoes and hail, and that fact has a lot to do with the rankings.

To get more detail, we reached out to ATTOM senior vice president Daren Blomquist. Our Q&A, conducted via email, is below, followed by data for the five Colorado counties characterized as at very high risk from natural hazards, as well as eight others whose risk level is considered high. Click to access the 2017 Natural Hazard Housing Risk Heat Map. 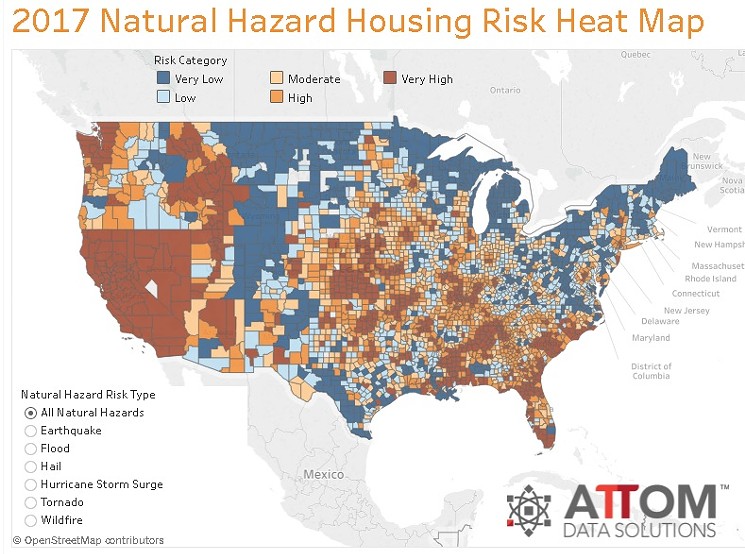 Click to access the 2017 Natural Hazard Housing Risk Heat Map.
Courtesy of ATTOM Data Solutions
Westword: Colorado residents tend to think of the state as relatively safe from natural disasters, yet six counties here are ranked at very high risk and eight others are categorized as high risk. What are the biggest risks for homeowners in these Colorado counties?

Daren Blomquist: The risk factors driving the overall risk index higher in several Colorado counties is hail risk and tornado risk. Certainly hail as a natural disaster probably gets the least press, and it tends to be more hyperlocal than many of the other disasters, but it can seriously damage a home.

Many of the most high-risk counties are in the Denver metro area. Why are the risks higher in those areas than in less populous areas?

One reason for this is that the tornado risk is based on the Destruction Potential Index calculated by NOAA, and that index is in part based on the potential damage to manmade structures. This fits well with our index because we are attempting to focus on the impact of natural disasters on housing, but it does also skew the tornado risk higher in more populated areas with more housing.

The City and County of Denver is considered very high-risk. Where does it rank in terms of risk among other large cities across the country?

As you note in your report, some of the fastest-growing cities across the country, including Denver, are considered at very high risk for natural disasters. Why are people so drawn to such areas despite the risks — or are many largely unaware of the risks, particularly in regard to a place like Denver?

The primary driver of home sales and price appreciation is jobs, and Denver is doing well in that department. Although I think home buyers are becoming more aware of natural-hazard risk given all the news coverage [devoted] to it, that risk is not a deciding factor for most home buyers. I would add that there is probably less awareness and concern around the risk of hail and tornadoes compared to factors such as hurricanes and floods. We do see in the data some evidence that home-buyer demand is weakening in areas at high risk for hurricanes and floods, but we don’t see it with hail and tornadoes.

The percentage of homes in the very high-risk parts of Colorado that are considered underwater is smaller in every case than the 6.4 percent average figure. Is that good news for those cities should disaster strike — and should owners of underwater homes have an incentive to improve their situation because of the greater risks?

Colorado homeowners in general have more home equity than in other parts of the country thanks to a red-hot housing market over the past few years, and that does provide a bigger cushion for those homeowners should some disaster strike.

The majority of counties in Colorado are ranked at low or very low risk in terms of natural disasters. What are the advantages for people to move into those areas — and are there any disadvantages from other standpoints that may counterbalance the lower risk for natural disasters?

While there is no way to completely avoid risk, homeowners living in or moving to lower-risk areas for natural disasters are more protected against physical and financial loss when it comes to what is probably their biggest investment: their home. But if that lower risk comes in an area without good access to jobs or other amenities that might be important to a homeowner, the added protection may not be worth it. There are places with an ideal combination of good jobs and low natural hazard risk, and those are often great places to buy a home.

What are the most important things people can do to lower their risk if they live in a county considered to be at very high risk for natural disaster?

Purchasing appropriate insurance is a great first step to protect against financial loss. Creating a disaster response plan including having necessary supplies on hand will help to ensure safety and sustainability should the worst-case scenario happen.

Continue to count down the Colorado counties considered to be at very high risk for home damage due to natural hazards.