Man Accused of Selling Mushrooms Faces Up to Twenty Years 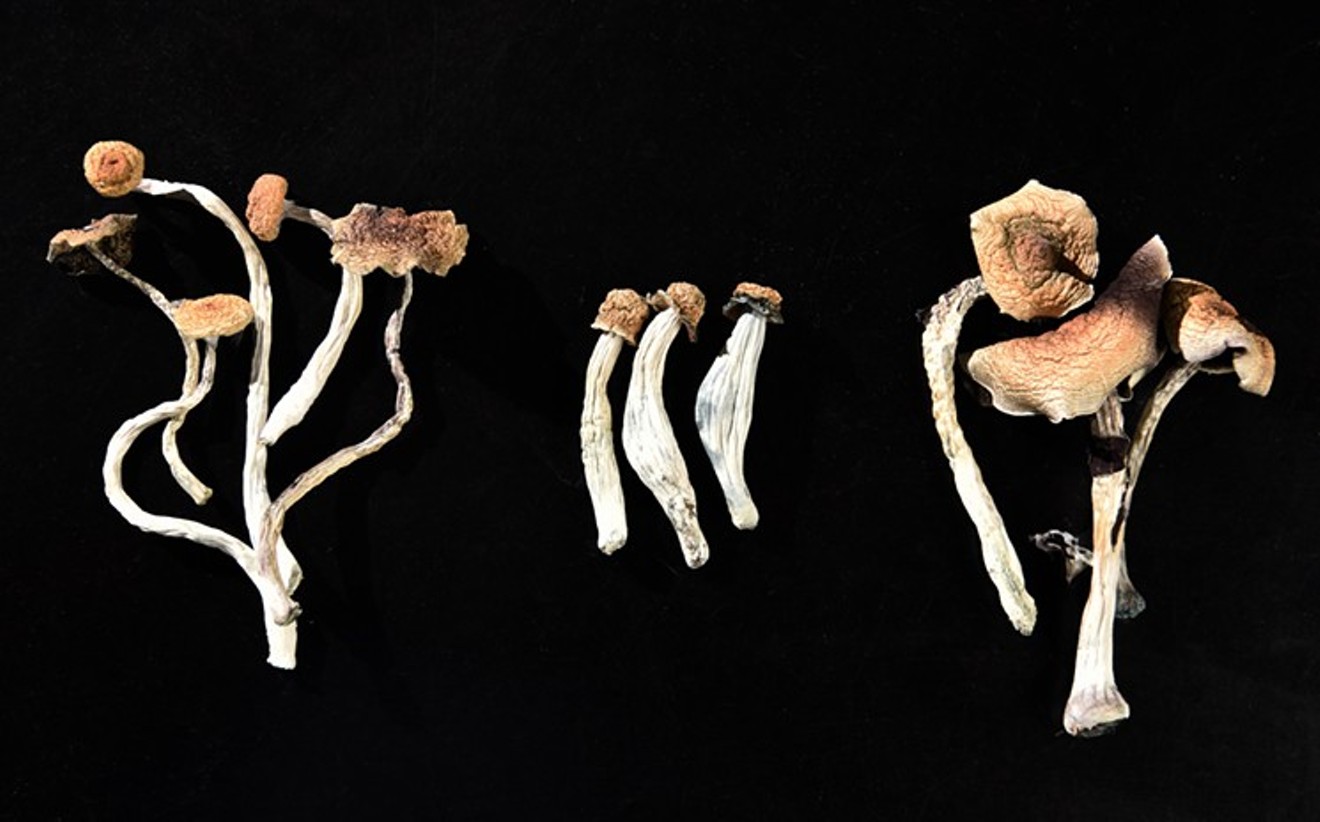 When Denver decriminalized psychedelic mushrooms, that didn't change federal law. Anthony Camera
A Denver man accused of dealing psychedelic mushrooms is facing up to twenty years in prison and a $1 million fine. On July 23, prosecutors with the U.S. Attorney's Office for the District of Colorado charged 28-year-old Kole Milner with one count of possession with intent to distribute psilocybin, the active ingredient in psychedelic mushrooms that is classified as a Schedule I drug by the federal government.

Milner pleaded not guilty during his appearance in court that same day, and was allowed to leave on bond.

The charging of Milner restarts a long-dormant case that began when Drug Enforcement Administration agents searched Milner's Denver apartment in September 2019, and left with 906 live psychedelic mushrooms and 20.42 ounces of dried mushrooms. An attorney representing Milner declined to comment on the charge, as did the U.S. Attorney's Office.

In May 2019, Denver voters approved a ballot measure that decriminalized personal use, possession and cultivation of psychedelic mushroom. That law only applies to Denver, however, and didn't handcuff federal law enforcement at all. So when DEA agents learned about Milner's alleged activity, they got on the case.

Here's how they learned about Milner: In late August 2019, local DEA investigators came upon a Denver Post article titled "Spores of psychedelic mushroom industry are sprouting in Denver after decriminalization."

The article "focused mainly on an unidentified male subject who is a self-proclaimed cultivator and distributor of mushrooms," according to court records. The man told the Post that he dealt to about twenty people and earned approximately $2,000 a month from his sales.

The article included a video that showed the "process of cultivating and manufacturing illegal psilocybin mushrooms occurring in the male's residence," according to court records. The video notes that the "male subject has been growing mushrooms in his apartment for a little over a year."

After seeing that piece, DEA agents began searching for other news stories about psychedelic mushroom sales in Denver. And there were plenty, including reports by National Public Radio, Westword and VICE News.
Coupled with the Post article, they revealed a number of key details: the unidentified man was going by the name "Douglas," used electronic transactions to avoid the threat of law enforcement, and worked in the cannabis industry.

In the online NPR article, a subject was wearing a shirt with the Happy Fox Edibles logo. A story in Harvest Public Media included a photograph in which a man was wearing the same shirt. The shirt also made an appearance in a VICE News story about a mushroom dealer named Douglas that was published around the time of decriminalization.

That shirt led the DEA to the Instagram page of Dillon Wheaton, the artist who designed the Happy Fox Edibles logo.

After that, it was easy for the feds to find Milner.

The Colorado Department of Revenue keeps a public database of all employees in the state's cannabis industry. DEA agents searched that database for the name "Douglas," the unidentified man they knew worked in the cannabis industry.

Among the hits was a "Kole Douglas Milner." On Milner's Facebook profile, investigators found pictures of a white male that matched the physical description of the "Douglas" in the articles. DEA agents found the profile to contain "several posts in support of the decriminalization of psilocybin mushrooms," according to court records.

The profile also included a video showing an apartment that looked similar to the one in the Denver Post video.

On Milner's Instagram page, he'd uploaded a picture that showed two pieces of art on his wall. The top one framed the Happy Fox Edibles logo, the bottom a design for the shirt that "Douglas" was wearing in the news photos and video.

DEA agents also found a photograph of Milner and others that Kevin Matthews, the head of the decriminalization initiative, had posted on Facebook in August 2019. In the picture, Milner is wearing the Happy Fox Edibles shirt.

The feds then subpoenaed Venmo and found a phone number listed for Milner's Venmo account that matched Milner's actual number. A transaction on Venmo showed one between Milner's account and an account for Wheaton, the designer of the Happy Fox logo.

In its search warrant application, the DEA included screenshots of some of the publicly-accessible Venmo transactions between Milner's account and others. One individual who paid Milner's account included emojis of mushrooms, while another person simply wrote "Magic."

Two and a half weeks after coming across that Denver Post article, the feds raided Milner's apartment. Almost eleven months later, Kole Douglas Milner was finally charged by the feds.

Update: This story was updated on August 12 to clarify where the Happy Fox Edibles logo appeared.
KEEP WESTWORD FREE... Since we started Westword, it has been defined as the free, independent voice of Denver, and we'd like to keep it that way. With local media under siege, it's more important than ever for us to rally support behind funding our local journalism. You can help by participating in our "I Support" program, allowing us to keep offering readers access to our incisive coverage of local news, food and culture with no paywalls.
Make a one-time donation today for as little as $1.