The bullet-hole-peppered windshield of Dion Damon's Dodge Charger. Denver District Attorney's Office
Two leading civil-rights law firms have joined forces to sue the City and County of Denver and Denver police officer Jeffrey Motz in regard to the fatal shooting of Dion Damon, who was gunned down in broad daylight near the Denver Art Museum two years ago this month. The lawsuit alleges that Motz's "grossly excessive" killing of Damon, a bank robbery suspect who was unarmed at the the time of the incident, was followed by an elaborate Denver Police Department coverup, and adds that the officer had previously slain two people while on the job yet was only disciplined on a separate occasion when he didn't squeeze his trigger.

"This is a case where police acted as judge, jury and executioner, which has been a national problem for some time now," notes attorney John Holland of Holland, Holland Edwards & Grossman. "In this case, it appears Denver went to a series of extreme measures in an attempt to exonerate an officer who shot an unarmed person. He shot and killed somebody who had no weapon and then he claimed he had one."

"The Denver Police Department has learned over the last two generations that it's basically immune from any prosecution or internal discipline in the event that it engages in excessive force," adds Darold Killmer, a partner in Killmer, Lane & Newman LLP. "I've never seen a municipality more protective of its own law enforcement officers when there's a complaint of excessive force — and it's a virtual certainty that the district attorney will not bring charges even if you kill an unarmed man like Dion Damon, who wasn't acting aggressively and wasn't trying to escape."

Indeed, then-Denver district attorney Mitch Morrissey found that Motz and the many other officers at the scene of the Damon shooting had done nothing wrong — and this wasn't unusual. The lawsuit points out that in the ten years prior to Damon's death, the Denver DA's office ruled that 71 out of 71 DPD shootings it investigated were legally justified. In December 2016, shortly before he left office, Morrissey defended himself against those who criticized him for never bringing criminal charges against police officers who shot and killed suspects by saying, "What I always tell people is, if you want to change our decisions on these, you have to change the law. You have to take away the right of self-defense. You have to change what an officer can do when confronted with force or deadly force. You have to change those things, because that's what we have to apply." 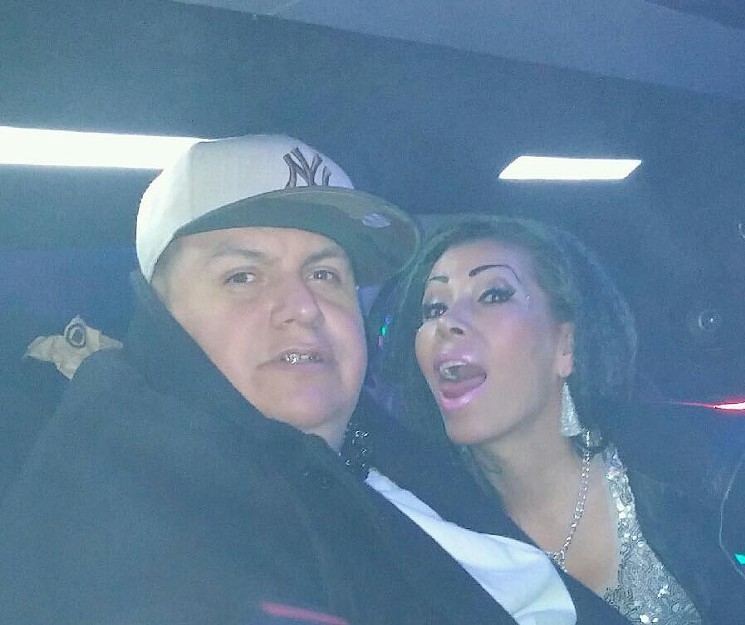 Dion Damon and his wife, Dawn Aguirre, who is a plaintiff in the current lawsuit.
File photo
Morrissey's decision letter about the shooting is accessible below, along with the suit, which points out that shortly after 12:30 p.m. on April 12, 2016, Damon parked his car between 13th and 14th avenues on the east side of Bannock so that his wife, plaintiff Dawn Aguirre, could pay a ticket at the Denver City and County Building. After she and the couple's young son left the vehicle, members of the Rocky Mountain Safe Streets Task Force who had been tailing Damon because of his suspected involvement in a March 17, 2016, armed robbery at the Bank of Denver branch near Holly and Leetsdale converged on his Dodge Charger, blocking it in against the curb. "Mr. Damon could not, and did not try to, escape," the narrative maintains.

At that point, Officer Motz exited the truck in which he was traveling and pointed his gun at Damon from approximately ten feet away, the suit continues. He wasn't the only one; other officers pulled their weapons, too. But at least one returned to his vehicle to get what's characterized as "less-lethal aid," presumably because it was clear Damon was unarmed. Likewise, no one else fired in the minute or so before Motz unleashed his fusillade, and neither did anyone ever shout "Gun!," as is police protocol when a firearm is sighted. That included Motz.

In addition, Aguirre was standing nearby throughout the encounter and is said to have "yelled loudly and repeatedly that her husband was unarmed, and that if they let her talk with him, he would readily get out of the vehicle." And a bystander also heard Damon tell officers at the scene, "I'm unarmed."

This photo shows how members of the Rocky Mountain Safe Streets Task Force pinned Dion Damon's car against a curb.
Denver District Attorney's Office
A search of the Charger afterward netted no gun. The only object near Damon was a white cell phone stained with his blood.

In subsequent interviews, more than thirty law enforcers on the scene said they hadn't seen a gun. The sole exception was Motz, who insisted that he'd spotted "a black-and-silver-colored semi-auto in [Damon's] right hand. And it's starting to come toward me."

Motz and other officers had plenty of time to refine their memories according to the following timeline of the hours between the shooting and their respective interviews with investigators: