Ed Perlmutter at the press conference announcing his withdrawal from the 2018 Colorado governor's race. Michael Roberts
Representative Ed Perlmutter has officially dropped out of the race for Colorado governor in 2018 just three months after announcing his candidacy and being branded the Democrat to beat in many quarters. Perlmutter insisted that the reasons for this move had more to do with the difficulties of serving in Congress and seeking statewide office at the same time than the entry into the contest of fellow Colorado rep Jared Polis, a multi-millionaire who plans to put plenty of his personal resources into his campaign. But the press corps had a tough time buying it, despite Perlmutter's repeated assertions.

That makes sense, of course. "When they say it's not about the money, it's about the money" is the very prototype of a statement that's a cliché because it's true, especially when it comes to politics. Yet this theory does little to explain why Perlmutter has also decided against running for reelection to his U.S. House seat despite the strong likelihood that he would have won in a walk — and neither did anything he said during a press conference that took place earlier today, July 11, in his jam-packed campaign office in Golden.

Perhaps the best answers came from his eyes, which took on a melancholy cast despite his frequent smiles, and his voice, which quavered with emotion on more than one occasion.

The press corps that gathered at Perlmutter's office was supplemented by family members such as his wife and his mother and plenty of staffers and supporters. Perlmutter, clad in a sports coat, collared shirt, jeans and sneakers, wandered among them prior to the start of the event, hugging late arrivals and peering nostalgically at a wall covered with photos. Then he moved behind a podium placed in front of an American flag and made brief introductory remarks.

"Over the last couple weeks, I’ve realized the demands of running for governor and of serving in Congress were going to take more from me than I can give," he revealed. "The Democratic primary field is crowded, and whether I'm in the race or not, primary voters will have a choice among a number of qualified candidates."

After a pause, he said, "I'm not planning to be a candidate for office in 2018. For the next eighteen months, my focus will continue to be serving the people of the 7th Congressional District, who I can't thank enough for their support and trust over the years. To my wife, Nancy, to my family, and to my dear friends and supporters, I want to thank you for your unwavering support. I know this decision is disappointing for many of you, and it is for me, too. But I know it is the best course forward. I want to wish good luck to my former Democratic primary opponents. I want them to remember I am still a voter and a member of the state central committee, so they'd better be nice to me." 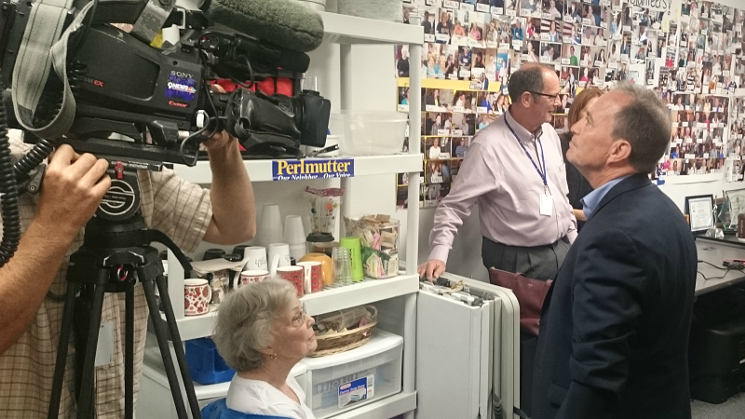 Ed Perlmutter looks at photos on the wall of his campaign office as both a camera operator and his mother look at him.
Michael Roberts
This last line earned a laugh that Perlmutter followed with comments about how "we're all lucky to live in Colorado." He then invited questions, and the first one he took was such an incredible softball — essentially, "What do you plan to focus on during the rest of your congressional term?" — that it had to have come from a member of Perlmutter's camp. (The same guy subsequently asked Perlmutter why he does such a better job listening to his constituents than do most politicians. Hard hitting!)

After Perlmutter said he planned to work hard on the veterans' hospital project, aerospace issues and assorted marijuana legislation before leaving his current gig, the press got its turn — and whether he quit because he knew he couldn't overcome Polis (and Polis's bankroll) was topic one.

"Jared's a good friend of mine," Perlmutter stressed. "We've served together eight, nine years, and honestly, when he got in, I had to take a good look deep down and ask what it was going to take to win this race and to serve full-time — to raise the kind of money you need for a statewide governor's race and to get around the state. I had to take a good look to see if I had enough fire in the belly or gas in the tank or whatever you want to call it to get that done. I had to take a good, realistic look at it. But it wasn't Jared. We agree on most things. We disagree on a few things. But it wasn't that. It was a decision to take a good look at what's going on and actually to continue to fulfill the commitment I made to the people of Jefferson County and Adams County who reelected me."

Was the amount of cash Perlmutter raised since entering the race lower than he would have hoped? "It's always lower than you would hope," he replied, earning a friendly chuckle from the room. "I would hope for $100 million." More seriously, he continued, "We had a good quarter, actually. Over $350,000" that will now have to be returned to donors, from "over 1,200 contributions. Over 700 of those were under $100, and 80 to 85 percent of them were from Colorado." But again he reiterated, "That's not it. You've got to do that all the time, and Colorado has particularly low limits for statewide races, which is part of our campaign-finance policy. Again, it takes a lot of time to do that kind of fundraising.... I think we did well, and I was happy with that. That's not what this was about."

As for why he hadn't pivoted back to a reelection bid, Perlmutter said, "There are a lot of good people in my race, for my congressional seat. We have three very good candidates.... Sometimes you need to move on and somebody else needs to come in."

Perlmutter insisted that he doesn't know what he'll do in early 2019, when his congressional duties will be complete: "I've got eighteen months to think about it.... I'm going to have time to consider that." But he said he still felt a responsibility to fight for his beliefs — "so maybe I'm moving from player to coach. I'm not exactly sure."

Next, Corey Hutchins of the Colorado Independent turned the conversation back to Polis, and specifically the concern among many progressives that there's too much money in politics. Perlmutter did his best not to take this subject head on. 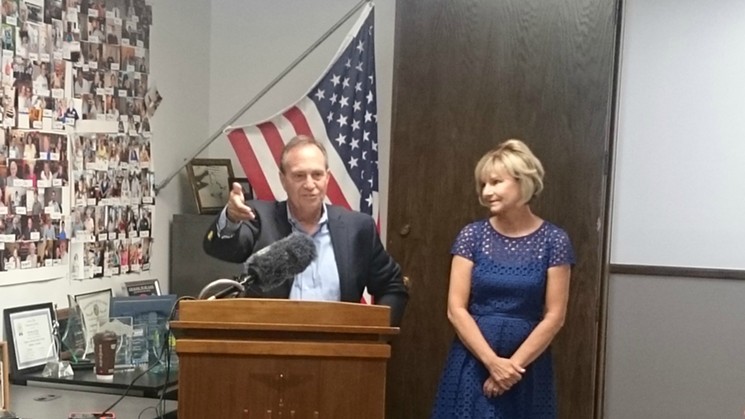 Ed Perlmutter speaking at the podium as his wife, Nancy, looks on.
Michael Roberts
"Look," he began, "Jared is one of the smartest guys I've ever met, and very successful, obviously. He's also a very good Democrat, and he and I agree on most issues. That's why primaries are tough — because you're in a contest with friends where on policies and issues there's not a lot of daylight. So then it becomes personality-driven types of decisions that voters have to make. I've been through tough primaries, and I know how hard they can be. So Jared, he'll get out and campaign as hard as anybody, and he's going to have to convince people that his ideas and philosophies and views of the world are aligned with theirs. And I don't think anybody should hold it against him that he's super-smart and he made a lot of money. That's just the bottom line."

Still, when asked if he thinks Polis is too liberal to win statewide office, Perlmutter was noncommittal. "I don't know," he said. "Let's see how all of this unfolds."

Likewise, Perlmutter declined to express a preference for any of the other declared Democrats, including former state senator Mike Johnston and onetime state treasurer Cary Kennedy. He dubbed himself a "team player" and said he wants his team, the Democrats, to win.

The twin demands of representing Colorado in Congress and trying to become governor depleted him more quickly than he'd thought, he went on. By his count, "I've covered 25 or thirty counties" as a gubernatorial candidate, "and it's a big darned state. I love this state, and I've been to a lot of [the counties] before. But it takes time, it takes money, it takes energy, and putting all those together, I found looking deep down, it was going to be difficult."

Nonetheless, he never considered leaving Congress to focus on the governorship full-time. "When you get elected, you have a contract with the place you represent," he said. "I thought I could do it all. I'm telling you right now, in front of all of you, I can't."

At that point, an aide said Perlmutter would take a final question. It came from 9News's Marshall Zelinger, who asked the moment when Perlmutter knew he needed to end his candidacy.

"It's been kind of a moving target," Perlmutter maintained. "I know when Steve Scalise got shot, that had something to do with it."

"That's it," the aide, who was standing beside me, said under his breath — meaning, presumably, that no one could argue with this response. After all, anybody would think about stepping away from politics after a gunman opened fire on a colleague practicing for a charity baseball game, as Scalise was when wounded last month.

But that's unlikely to be the final word on Perlmutter's abrupt decision — or on a Colorado governor's race that's getting more intriguing even though the election is still more than a year away.