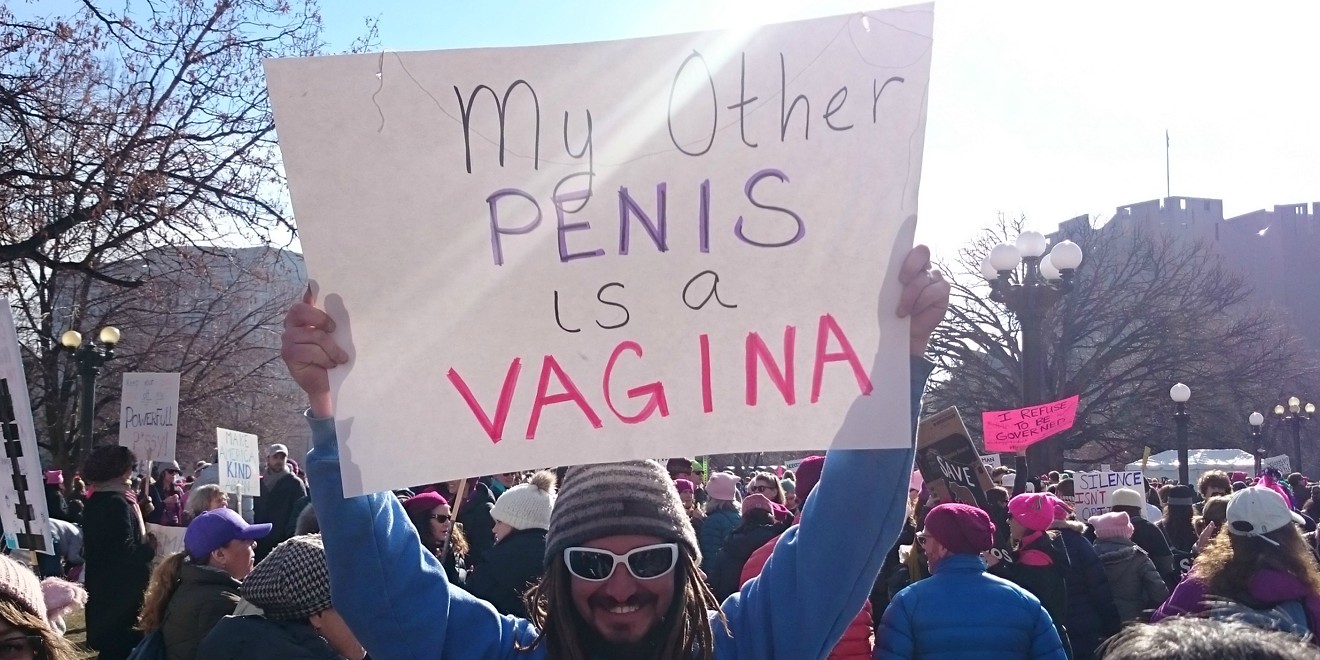 Additional photos below. Photo by Michael Roberts
President Donald Trump isn't the only person to question attendance estimates at a big event over the past few days. I do, too. The audience-size guess most frequently floated after the Women's March on Denver, which took place on Saturday, January 21, was "more than 100,000." But to me, the Civic Center Park area seemed just as packed as it did during the Broncos' Super Bowl 50 Victory rally in February 2016 — and the crowd at that bash was supposed to be a million strong.

Whatever the true digits, the Women's March was an amazing gathering of passionate, emboldened creative females (and quite a few males, too).

And a lot of it couldn't be shown by the mainstream media.

Granted, plenty of the messaging was safe for work, including the very first sign I saw, a hilarious placard placed on a table next to a Starbucks inside the King Soopers on Speer before the festivities got under way:

Photo by Michael Roberts
Later, at the march itself, there was more family-friendliness, exemplified by this adorable kid dressed as Alexander Hamilton and using a Lin-Manuel Miranda photo to call for us to "Save Our Democracy:"

Photo by Michael Roberts
And even though the sign carried by this sprightly nonagenarian makes reference to Trump's recorded "grab 'em by the pussy" claim, it might've gotten past a news editor, too. (She's also featured in our Women's March on Denver slideshow.)

Photo by Michael Roberts
But plenty of other declarations were a little too blatant for a local TV station, including the message on this Trump-style red trucker hat: "You Are a Fucking Idiot."

Photo by Michael Roberts
And then there was the guy in the Trump mask who'd rigged up a "golden shower" over his head, complete with golden tinsel that recalled the "urine show" mentioned in the unconfirmed dossier of dirt allegedly held by the Russians.

Photo by Michael Roberts
With that in mind, we've gathered our picks for the funniest signs and messages you probably didn't see on TV.

Photo by Michael Roberts
Side two:

Photo by Michael Roberts
Getting anatomical:

Photo by Michael Roberts
This one would have fit well in Teague Bohlen's collection of nerd-tastic signs, but with an F-bomb bonus:

Photo by Michael Roberts
Continue for more of the funniest and/or most NSFW signs seen at the Women's March on Denver.