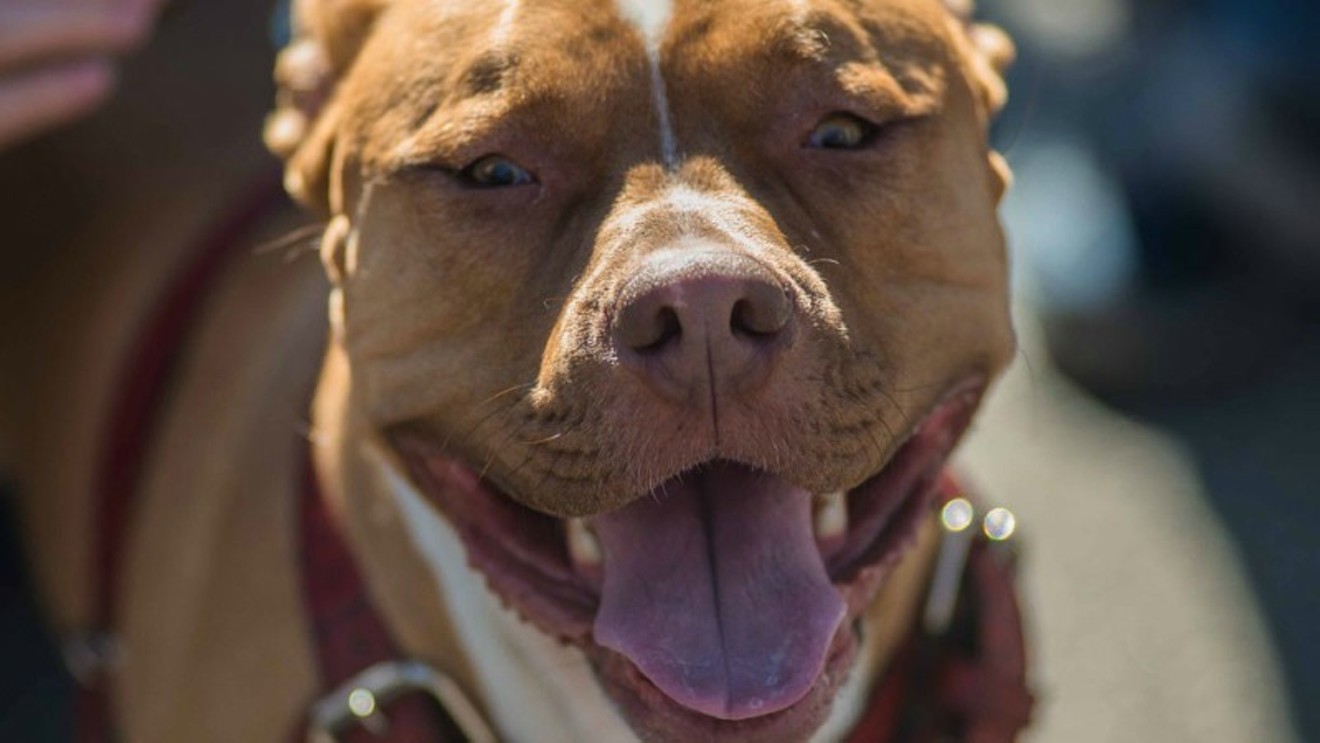 A photo from our slideshow "Parade of Pit Bulls 2013." Photo by Darian Simon
Advocates of a proposal recently approved by Denver City Council that would effectively end Denver's 1980s-era ban on pit bulls believe that science and statistics support their contention that breed-specific legislation is ineffective. And despite Mayor Michael Hancock's veto of the proposal, which triggered an attempt to override that action scheduled for the council meeting on February 24, facts and figures from Denver Animal Protection (DAP) do indeed show that pits weren't the most dangerous dogs in the city last year.

Three canine breeds bit people in Denver more frequently during 2019 than did those specifically designated as pit bulls — and records from other jurisdictions over the past decade or so suggest that these results aren't outliers.

A document tracing all 518 dog bites reported to DAP last year is shared below, along with additional data detailing other salient information, including the ages of victims (most were between 21 and 30), their relationship to the animal in question (neighbors top the roster) and the location of the incident (public settings were number one, with the majority of the bites occurring when dogs were off-leash).

As for the breeds, here are the top ten categories for most bites in Denver in 2019, excluding "unknown," which numbered 42:

Some people might assume that the pit bull bite total would be higher if the ban weren't in place, under the theory that Denver's rules serve to suppress the population of American Pit Bull Terriers, American Staffordshire Terriers and Staffordshire Bull Terriers, the three breeds prohibited by name. Moreover, combining bull terrier bites with the pit bull total would push pit bulls into second place, only three bites behind Labrador retrievers.

At the same time, though, many dogs defined as pit bulls are actually mixes whose physical characteristics are visually pit-like, making precise identification difficult. And despite Denver's ban on the pit bull-related breeds, there are plenty of dogs living in the city that belong under that umbrella, as noted by Chris Herndon, the Denver City Council member who proposed the breed-restrictive-license ordinance. Last month, he told us, "We know these breeds are in our community — and because they're banned, there's a higher possibility that the owner won't seek out professional guidance or even proper pet care. And right now, we don't know where these dogs are. If the ordinance passes, we will, and that will make our community safer."

Another reason that the scope of the local pit bull population is unknown was cited by Hancock in his veto letter to Denver City Council: Only about 20 percent of the dogs living in Denver are registered, meaning the makeup of the other 80 percent remains mysterious.

Labradors and German shepherds have a long history of biting more frequently than pit bulls in the Mile High. In our November 2014 post "Ten Dog Breeds With the Most and Fewest Bites in Denver," we shared statistics about dogs that bit people from 2012 to 2014. Over that span, Labs were number one, with 222 bites, followed by German shepherds, with 169. Pit bulls finished third at 152 (the city didn't count bull terriers for that report), and American bulldogs were sixth, with 86 bites — a considerably slower rate than the breed registered last year.

More detailed biting data can be found in our April 2018 item "The Popular Dog Breeds Most Likely to Bite You — and They're Not Pit Bulls." At the time, Castle Rock was looking at ditching its own pit bull ban in favor of breed-neutral legislation — and the bill's passage there helped inspire advocates in Denver to pursue a similar course.

The research conducted by Castle Rock officials prior to that town's vote included surveys of dogs that bit humans between 2010 and 2017 in nearby areas: the City of Centennial, portions of unincorporated Douglas County with and without Castle Rock mailing addresses, and unincorporated Parker. The stats were divided into three bite categories: minor, moderate and severe. (Denver officials were unable to delineate bite severity by breed for their 2019 numbers.)

In every case, pit bulls finished behind Labradors and German Shepherds. Here are the stats by jurisdiction: 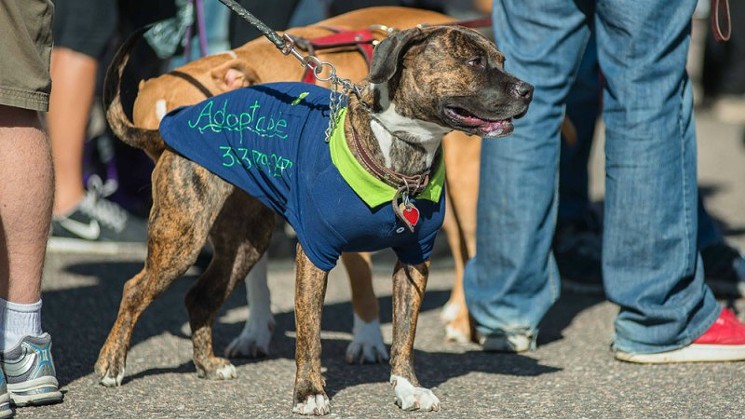 A photo from our slideshow "Parade of Pit Bulls 2013."
Photo by Darian Simon
City of Centennial

Note: No pit bull bites were recorded in this category

As the Castle Rock study determined, pit bull bites tended to be less severe, or at least no more serious, than those by Labrador retrievers, German shepherds and several other breeds during the long analysis period. Yet there are no efforts (or at least none that we know of) to ban any of these dogs in Denver.

Click to access the City of Denver document cataloguing dog and cat bites by breed in 2019 and additional bite statistics. The veto override vote is expected to take place at the Denver City Council meeting scheduled for 5:30 p.m. February 24 in room 451 of the City and County Building, 1437 Bannock Street.

This post has been updated to include information about the veto override vote now scheduled to take place during the February 24 Denver City Council meeting.
KEEP WESTWORD FREE... Since we started Westword, it has been defined as the free, independent voice of Denver, and we'd like to keep it that way. With local media under siege, it's more important than ever for us to rally support behind funding our local journalism. You can help by participating in our "I Support" program, allowing us to keep offering readers access to our incisive coverage of local news, food and culture with no paywalls.
Make a one-time donation today for as little as $1.