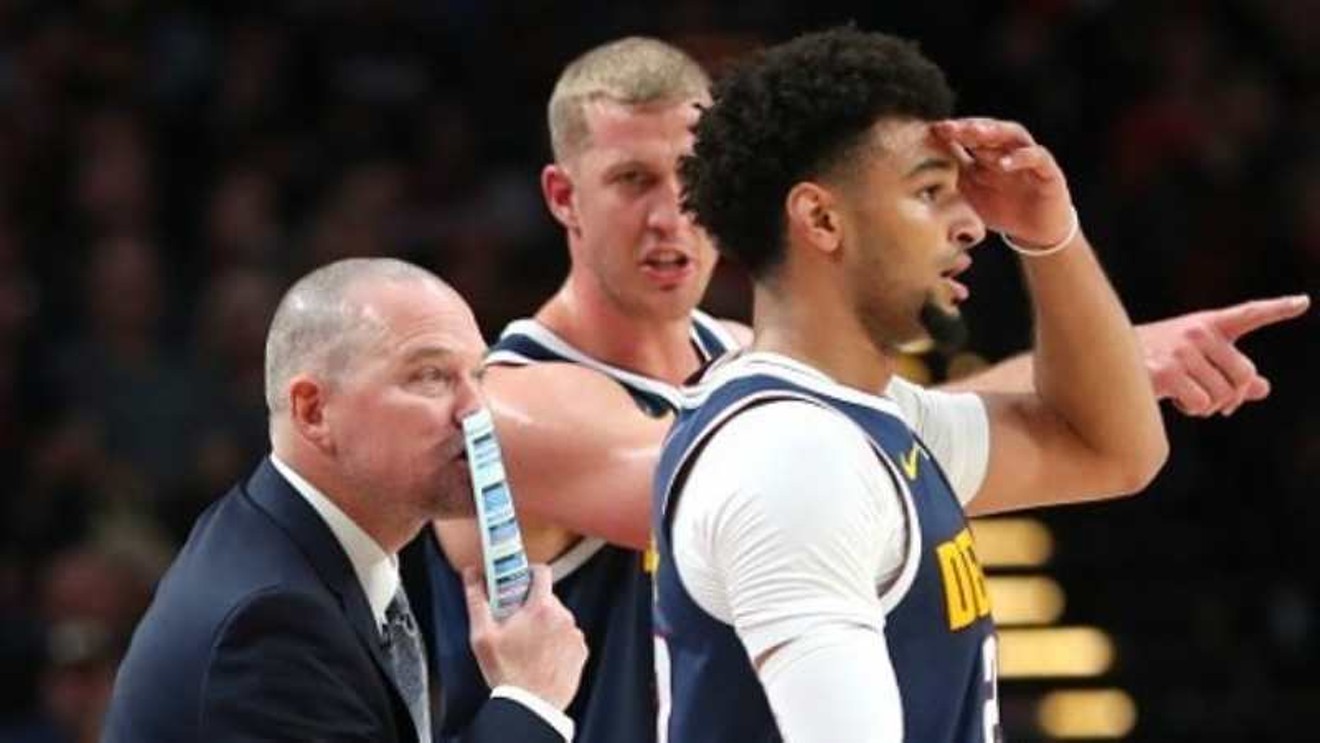 How Jamal Murray (with coach Michael Malone and Mason Plumlee) might have reacted when he realized his sex tape was on Instagram. Abbie Parr/Getty Images
Denver Nuggets star Jamal Murray has cracked the code. At a time when the only thing on most people's minds is COVID-19, Murray found a way to trend on Twitter for something more or less unrelated to the virus — a sex video of him being pleasured by girlfriend Harper Hempel, which popped up on his Instagram account yesterday, March 22.

Still, plenty of tweeters quickly made a COVID-19 connection — by suggesting that Murray is winning quarantine.

No, we're not sharing the (incredibly explicit) clip here, since anyone who wants to eyeball it can easily do so — and the Twitter collection below skips the most profane or racially dubious reactions. Instead, we've focused on the funny, which all of us could use more of now.

The Nuggets have some high-profile ties to the novel coronavirus. Their March 11 match-up with the Dallas Mavericks in Texas was the last to be completed before the plug was pulled on the NBA season, and it easily qualifies as the most bizarre game in the history of both franchises. Then, last week, a member of the Nuggets organization tested positive for COVID-19.

The typical protocol for those who've been in proximity to someone with the virus is a fourteen-day quarantine, and Murray appears to have enjoyed staying close to home — at least until he realized that documentary evidence of how he's been spending his time began flying around the social-media universe. Shortly thereafter, he tweeted this: "First and foremost I would like to apologize to my fans. My account has been hacked, currently working on the issue. Thanks."

As you'll see, plenty of people doubt this explanation, while others are clearly overjoyed for the distraction — and it's a big one. Continue to count down our picks for the twenty most memorable tweets about the Murray-and-Hempel close-up.

@ me if you wanna do the Jamal Murray challenge

Nuggets staff after finding out why jamal murray is trending on twitter: pic.twitter.com/SGbrE3THtb

I know Jamal Murray household up in FLAMES still

Staring at the ceiling thinking about the Jamal Murray video

If you jump onto Jamal Murray’s Instagram there was some pretty decent ball handling shown there...

Jamal Murray must be lovin quarantine

Jamal Murray’s teammates next time they see him: pic.twitter.com/1VaHHlicAW