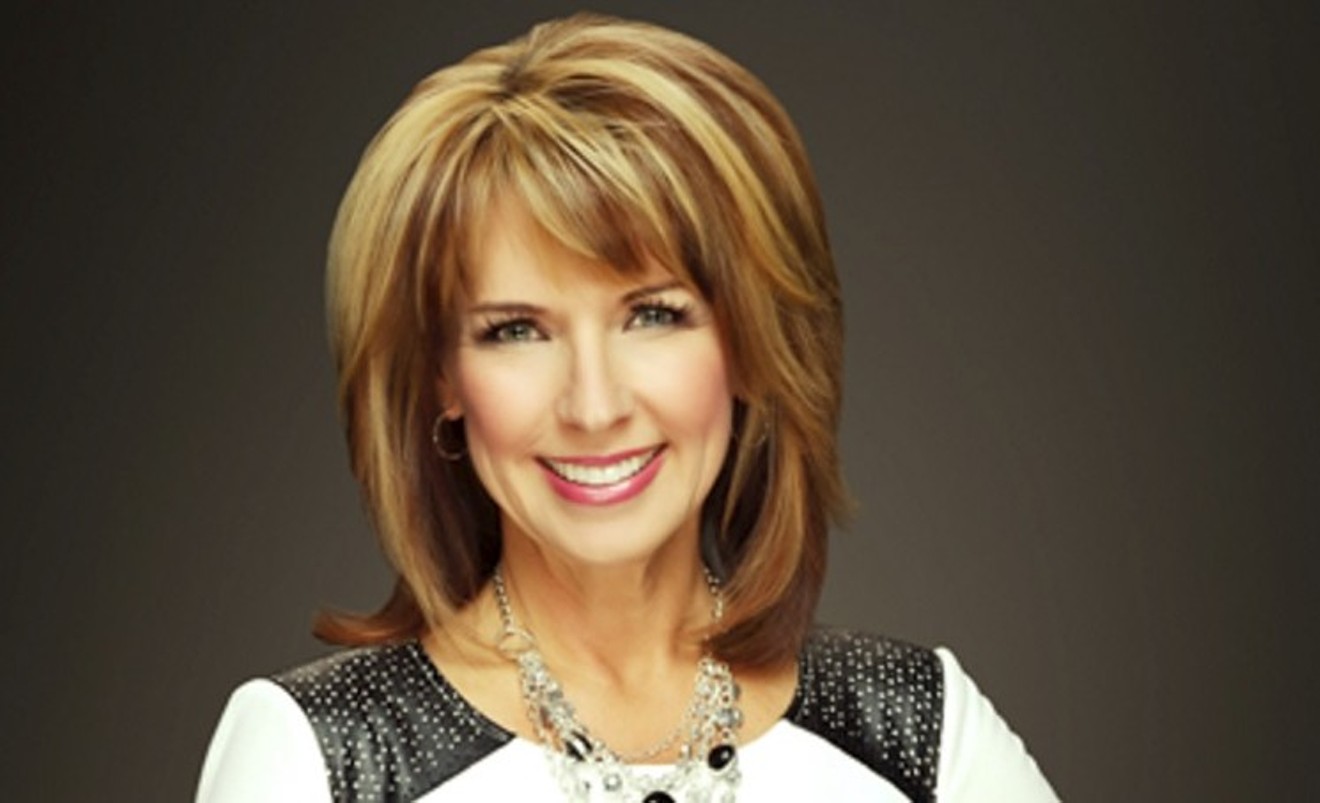 Kim Christiansen will take over as main anchor at 9News from the departing Adele Arakawa. 9News
The announcement that Kim Christiansen will take over the main anchor slot at 9News following the departure at month's end of Adele Arakawa, who revealed her plans to retire last year in a bizarre blast at fake news, suggests that the station's signature programs will continue their drift toward softer coverage intended to appeal to the aging demographic that still tunes in to television newscasts.

Christiansen was included in our recent roundup of fifteen Denver TV news stars who could fall victim to cost cuts because the CU Boulder grad has been at 9News since 1985 and no doubt commands a higher salary than potential new hires — and that's significant during a day and age when falling revenue has inspired outlets to jettison veteran talent. Indeed, 9News has bid farewell to a slew of audience favorites over recent years, including sportscaster Drew Soicher, morning anchor Kyle Dyer, entertainment reporter Kirk Montgomery, sports personality Susie Wargin and self-described business boy Gregg Moss.

But Christiansen was saved by 9News's need for a familiar face to replace Arakawa, whose public acknowledgment about her impending June 30 exit was made following the publication of a December 2016 FTVLive post headlined "TEGNA to Push Out Longtime Denver Anchor?" That piece quoted "sources" who maintained that "TEGNA-owned KUSA in Denver is pushing longtime Anchor and FTVLive favorite Adele Arakawa out the door.... Word is very hush-hush, but it appears that the Denver station is 'offering' Arakawa a buyout and she is very much being urged to take it."

In a video response to the FTVLive offering, Arakawa confirmed, "I am leaving." But she emphasized that she's doing so "of my own volition, and contrary to the fake news, I'm not being given a golden parachute. I wish. That's a joke."

Adele Arakawa during the announcement of her impending retirement from 9News circa December 2016.
9News via Facebook
She added: "This was a decision made a year ago. 9News approached me eighteen months before my current contract expired to ask me to stay for another term. Twelve months ago, I told them this was it, this is my final contract, and that I wanted to retire in June 2017. Close friends and colleagues have known this for months."

The FTVLive post pushed up her timeline, she said: "I had wanted to wait at least a few more weeks to announce my retirement — one, because I believe Cheryl Preheim, whose last day at 9News is December 16 [Preheim took a job at a station in Atlanta], deserves the attention and accolades for her many years here and her contributions to this community; and two, I'm not leaving for another six months!"

Along the way, Arakawa derided "fake news" as "ugly, insidious" and something that "undermines the very values I've worked hard to exemplify for my forty-plus years in this business" even though the FTVLive report wasn't actually fake. While some of the details are in dispute, the gist of the piece — that Arakawa's days at the station were numbered — proved accurate.

For her part, Christiansen is getting a bump-up to the big time that mirrors what happened to Mark Koebrich, who spent decades in low-key roles at 9News before being tabbed as main anchor when management decided that his predecessor, Bob Kendrick, was too expensive. The worm turned seven years later; in 2015, Koebrich was the one who retired.

A screen capture from a 9News video in which anchor Mark Koebrich can be seen celebrating during his 2015 retirement announcement.
9News
As for Christiansen, her main gig lately has been helming the 4 p.m. newscast at the station, which tends to be dominated by what is euphemistically described as "lifestyle reporting" — feel-good stories about nice people doing nice things.

In a news release about Christiansen's promotion, 9News president and general manager Steve Carter emphasized these qualities, saying, "Kim is an exceptional storyteller and naturally empathetic journalist. Her work for this community, leading our BuddyCheck9 cancer detection campaign as well as 9Cares Colorado
Shares and her many other volunteer efforts, demonstrates her lifelong commitment to service."

In other words, hard-hitting journalism isn't a requirement for the position — and while Arakawa has something of an edge, Christiansen's style turns on a blend of friendliness and concern.

Granted, these are fine qualities that should appeal to older viewers — the kind who still turn on the TV at 10 p.m. to see what happened that day, as opposed to keeping up with developments on their smartphones. On today's TV landscape, being reassuring is almost as important as having a reasonably affordable contract.