Marty Coniglio Out at 9News After Controversial Nazi Photo Tweet 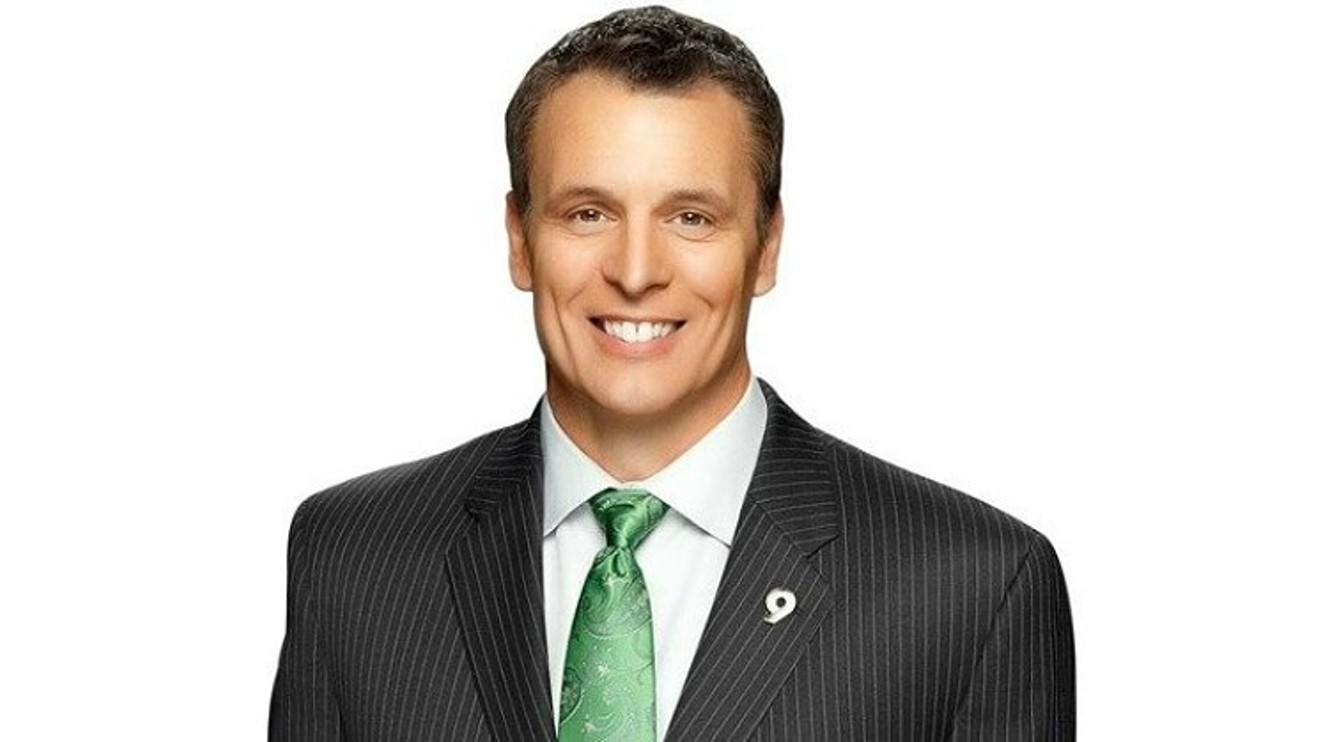 Marty Coniglio isn't talking about the specifics of his departure from 9News. 9News
It's been a tumultuous year for veteran 9News forecaster Marty Coniglio. Last November, he divulged that he expected to leave the station's ultra-popular morning show by year's end, sparking an outcry from fans loud enough that management subsequently lured him back into the fold amid vociferous praise for his talents. But now Coniglio is out, following a July 23 tweet that equated federal law enforcement officers dispatched to cities such as Portland, Oregon, to World War II-era Nazis.

Last year, Mark Cornetta, the president and general manager of 9News and its sister station, KTVD, as well as executive vice president for TEGNA, the signals' parent company, told us he was disappointed that Coniglio wasn't planning to renew his contract with the outlet since "he's done a fantastic job" and is "a really smart scientist who's added an incredible amount to our meteorological team." Now, however, Cornetta declines to comment beyond confirming the veracity of an internal email sent to employees at the unusual hour of 9 p.m. on Friday, July 24.

"Dear Colleagues," the note begins. "I want to share that Marty Coniglio is no longer an employee of 9News. We thank him for his many years of service."

For his part, Coniglio responded to Westword's outreach with a text that reads: "I am moving along with the next opportunities coming up in my life. I don't really have anything to say about past events."

This response represents a shift for Coniglio, who'd previously been very forthcoming about his departure plans and how they changed.

A native of Nebraska, Coniglio began his TV career in 1985 at a signal in Lincoln, then spent a year in La Crosse, Wisconsin, and two more in Decatur, Illinois, before landing a gig at CBS4 in Denver. "I was at Channel 4 for ten years, Channel 7 for five years and Channel 9 after that," he recalled when he spoke with us earlier. But over time, he had increasing trouble with what he described as "some health problems that the early-morning schedule makes really, really challenging, It's not anything scary, but I get chronic migraines, which I've had since I was in junior high, and the sleep schedule isn't good for that."

In addition, he said, "I developed tinnitus, ringing in the ears, around 2010. I've gotten treatment for that; I actually wear hearing aids that have helped quite a bit. But over the course of the morning show, I've developed an ulcer. So it's a nice little trifecta where sometimes, when I need to smile and laugh and joke, I'm barely making it through the morning."

At that point, a career change was on Coniglio's agenda; he applied for a job as a jet salesperson, among other positions. But he stayed on beyond his anticipated December 30, 2019, exit, and in early January, he informed us that he might be sticking around at 9News. By mid-month, the renewed relationship was formalized by an email from new director of content Tim Ryan: "I’m happy to share with you that Marty Coniglio has extended his stay at 9News. I’ve worked with Marty for many years and look forward to watching him early every morning, even when the weather isn’t good. (I do understand he’s not responsible for the actual weather.)"

At the time, Congilio said he'd agreed not to get into specifics about how long his additional stay would be, but predicted "it will go past this summer."

That changed following this tweet, sent out on the same account he used to pass along his meteorological prognostications: The tweet in question.
Twitter
Within hours, the message was noted by prominent Republican activist Rick Enstrom (disclosure: a longtime friend of yours truly), who wrote, "Oh, boy. @martyconiglio stepped (on) it big-time.... Take it down, bro." Coniglio did so, but not quickly enough. By early afternoon, the Colorado GOP Twitter account was on the case, tweeting, "Republicans know that the press leans to the left, but are fellow reporters okay with this type of radical hate against law enforcement from employees at local news stations?" And Congressman Ken Buck (and head of the Colorado Republican Party) followed suit, opining on his Twitter account that "comparing the brave men and women of our law enforcement community to Nazis is absolutely reprehensible."

The 9News policy toward social media use by employees isn't publicly available, but as noted by Kyle Clark in a 2017 Q&A about his mastery of the form, the station "encourages journalists to be active on social media." However, folks in the press know that missteps on such platforms can have negative consequences. Witness the Denver Post's dismissal of sportscaster Terry Frei three years ago when he tweeted about being "very uncomfortable with a Japanese driver winning the Indianapolis 500 during Memorial Day weekend" — an opinion he'd meant as patriotic but that critics found racist.

After the Post reported news of his split from the station (neither side is saying whether he jumped or was pushed), Coniglio took to Twitter again. "While occupying the temporary role of 'shiny object' for media and social media, please allow me to remind you that what this is really about is systemic racism in this county and those who would use their power and influence to maintain it," he stated, adding the hashtag #BLM.

In subsequent tweets, Coniglio wrote, "Historians have estimated that between 15 and 20 percent of the 2,000,000 whites in the American colonies in 1775 were Loyalists to King George III," and referenced one of his critics: "I'm told that @RepKenBuck has weighed in on my situation. I respect the congressman for getting Robert Mueller to testify under oath that he believes the president could be charged with obstruction of justice after leaving office."

Coniglio can freely share his political views: No one at 9News can stop him now.
KEEP WESTWORD FREE... Since we started Westword, it has been defined as the free, independent voice of Denver, and we'd like to keep it that way. With local media under siege, it's more important than ever for us to rally support behind funding our local journalism. You can help by participating in our "I Support" program, allowing us to keep offering readers access to our incisive coverage of local news, food and culture with no paywalls.
Make a one-time donation today for as little as $1.