Melvin Lewis with Kanei Love in a Facebook photo from 2015. Facebook
Two years after we told you about Melvin Lewis's arrest for punching his girlfriend amid an argument in which she killed a dog, he's back in the news again. This time, he's accused of stealing from bags at Denver International Airport, where he worked, and his specific focus is said to have been guns.

His victims allegedly include an investigator with a New Jersey prosecutor's office who'd traveled to Denver to attend a conference on terrorist bombings.

According to the Denver District Attorney's Office, the DIA thefts, first reported by CBS4's Brian Maass, involve one count of felony theft, although the beef corresponds to three incidents involving separate victims — one on April 13, a second on May 4 and a third the next day, May 5. Lewis is also facing a charge of violating the Pawnbrokers Act for trying to sell one of the guns that vanished from luggage at the airport, which led directly to his bust.

His initial stint in the spotlight occurred as a result of an incident that took place on October 18, 2015, at a residence on East Albrook Drive.

Upon their arrival, as noted in police reports accessible below, Denver police officers found Kanei Love, Lewis's significant other at the time, "holding a small dog in her arms [that] appeared to be dead."

Melvin Lewis circa 2015.
Denver District Attorney's Office
What happened? Love told the cops that in the midst of an argument with Lewis, she announced, "I don't give a shit about the dog" and kicked the animal, causing it to fly three to four feet in the air. By the time it hit the ground, it was no longer among the living.

The accompanying probable-cause statement about Lewis doesn't mention the dog — but plenty of violence is cited. He's said to have punched Love three to four times in the face, causing a small cut and swelling to her lips. In addition, he allegedly grabbed her, causing scratches to her chest and right cheek. Nonetheless, Love turned down numerous efforts to call an ambulance for her.

Lewis was subsequently charged with what the Denver District Attorney's Office described as "a city assault charge," while Love was hit with a felony count of aggravated cruelty to animals.

Cut to 2017, when Lewis was working for Air Serv, a firm that helps process bags at DIA, among other services. An affidavit also shared here describes how authorities pinned him for one of the gun heists. 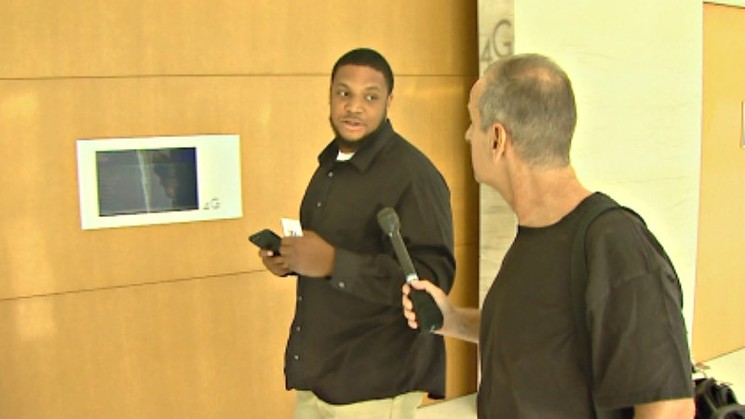 Melvin Lewis being quizzed by CBS4's Brian Maass.
Courtesy of CBS4
On May 4, a passenger declared his firearm with a United Airlines flight from Denver to Grand Rapids, Michigan. The weapon, a Ruger .22 stainless-steel Mark III Hunter pistol, was locked in what's described in the report as a "secure" case, and after it cleared inspection by the Transportation Security Administration, an unnamed Air Serv agent took charge of it. By the time the passenger arrived in Grand Rapids, however, the gat was gone.

Just over three weeks later, on May 26, a Ruger .22 with the same serial number turned up at Fast Cash Pawn, located at 4611 Peoria Street — and Lewis's name was on the pawn ticket.

The affidavit quotes Lewis as saying that "he totally owns the firearm and he has owned the firearm for four months." But the cops didn't buy this explanation, and they now believe he took other guns from the airport, too.

When Lewis was asked by CBS4's Maass about the stolen guns, he insisted, "No, that was never me...that's not me." He'll get a chance to make the same argument on Monday, October 2, when he's scheduled for a court appearance — an obligation with which he's clearly familiar.