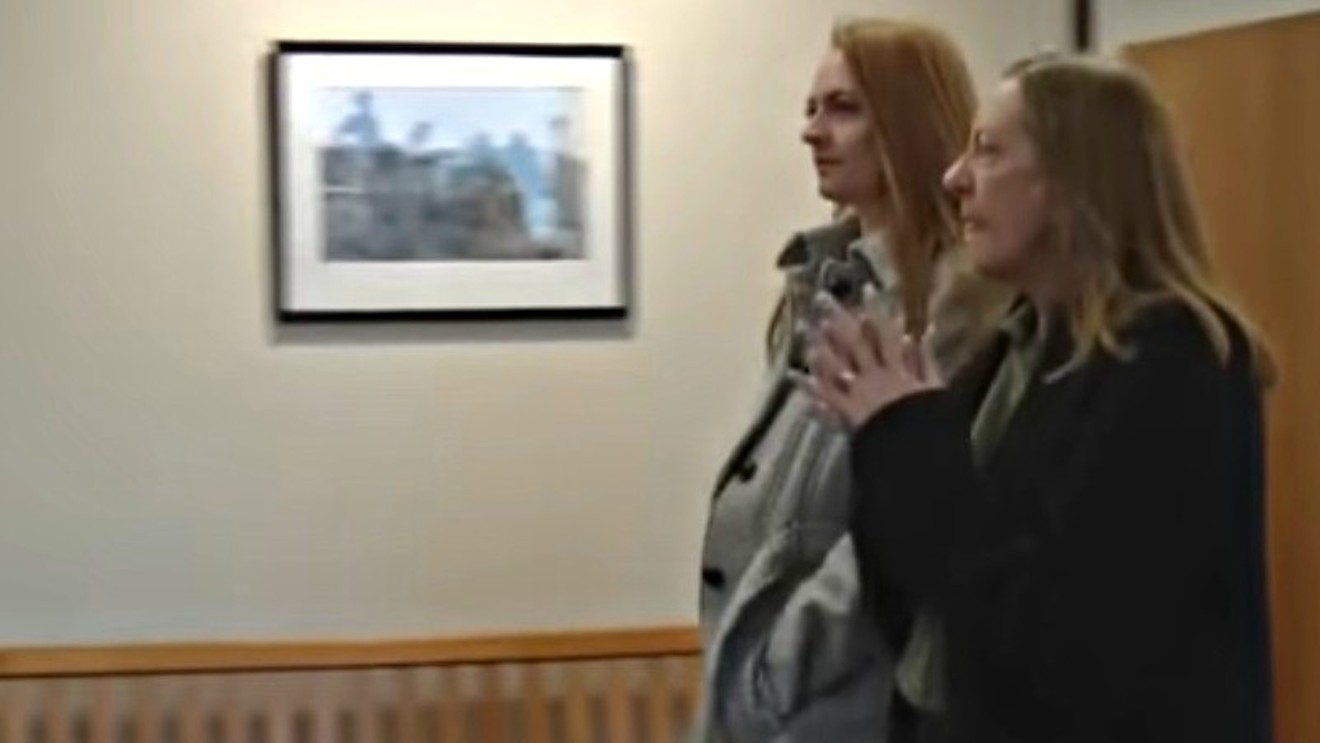 Michaella Surat, left, arriving for a court hearing on Monday. CBS4 via YouTube
Update: A mistrial has been declared in the case of Michaella Surat, a Colorado State University student who was charged with obstruction and resisting arrest after an April 2017 incident during which her body-slamming by a police officer was captured in a viral video; see our previous coverage below.

The reason? New evidence has been discovered by the defense team, led by attorney David Lane, and after learning about it, Judge Joshua Lehman dismissed jurors so prosecutors could review it in more detail.

Reached this morning, Lane was extremely limited in what he could reveal about this surprising development.

"Unfortunately, we are all under an order not to discuss the nature of the newly discovered evidence with anyone," Lane notes via email. "Both sides agreed that a mistrial was appropriate given the circumstances. The defense discovered new evidence, and the prosecutors need time to evaluate it. Beyond that, I’m sorry, but I can’t comment."

This doesn't end the matter for Surat. A new trial is expected to be set for April or May, unless the aforementioned evidence convinces prosecutors to pull the plug. But more court action could follow. Yesterday, Lane shared his view that Surat was only put on trial because a conviction might mitigate a lawsuit over what he considers to be excessive force exhibited by Fort Collins Police Services Officer Randy Klamser.

Continue to read our previous coverage, which includes the video.

A screen capture from the viral video of Michaella Surat being body-slammed by a Fort Collins police officer. The clip is on view below.
Facebook
Original post, 8:58 a.m. January 9: Today, January 9, in Fort Collins, the trial continues in the case of Michaella Surat, who's accused of misdemeanor resisting arrest and police obstruction in regard to an April 2017 incident that ended with her being body-slammed to the ground by a police officer, as seen in a video that went viral. Shortly before day two of the proceedings were scheduled to get under way, attorney David Lane, who represents Surat, offered us a preview of the case, which he believes is being pressed as part of a strategy to avoid another trip to court.

"The police officer filed the charges against her," Lane said, "and now they want a conviction because they think that's going to insulate them from a civil-rights lawsuit."

On April 6, as reported by both local and national media outlets, including ABC — which gave the story the Good Morning America treatment, complete with a Surat interview, a week after it happened — officers with Fort Collins Police Services were called to the Bondi Beach Bar in Old Town because Surat's boyfriend got into a fight with another man.

In an opening argument yesterday covered by the Fort Collins Coloradoan, prosecutor Mitch Murray maintained that when officers arrived, Surat and her boyfriend were trying to get back into the bar after he'd been kicked out. He asserted that Surat was generally uncooperative, hitting and grabbing the neck of Officer Randy Klamser, as well as trying to get a crowd that gathered to turn against the cops.

Klamser responded as seen in the following clip, which is brief but shocking.


In Lane's view, the footage speaks for itself — but Mitchell and his team believe otherwise.

"They're saying, 'You can't just watch the video. You have to talk to the people,'" he noted. "But that should be a red flag. That's how the cops get away with things like the Rodney King beating case. They always say, 'Don't pay attention to the videos. We're telling you what actually happened.'"

After an internal investigation, Klamser was cleared of wrongdoing, which was no surprise to Lane: "We see that over and over again," he maintained. But the prosecution suggests this was the right call based on body-camera footage. "What you will see is officers trying to, with a great deal of patience and a respectful tone, trying to preserve the peace, trying to complete the investigation that they need to do as part of their job, and you'll see this defendant obstructing that and resisting," Mitchell told the jury on Monday.

Michaella Surat's booking photo.
Fort Collins Police Department
According to him, "It shows her walking up and the cops saying, 'You're free to go.' She says, 'I'll stay here.' [Klamser] then grabs her and she starts yelling, 'Get your hands off me!' He's not telling her she's under arrest, he's just grabbing her, even though she's doing nothing. Then she tries to pry his fingers off her arm because he was hurting her. She says, 'I'll put my hands up. Tell me, what did I do?' And then he throws her down."

As for Surat, Lane said, "The implication is that she must have been drunk, but no blood-alcohol test was ever given to her, even after they charged her with obstruction and resistance. And she's allowed to use reasonable force in response to unlawful, excessive force. They claim that trying to stand after she was thrown to the ground was resisting, but we say that she was simply defending herself against this officer's brutal attack."

The trial starts again at 9 a.m. and is scheduled for three days, though Lane suggested it may wrap up today. Whatever happens, the possibility of the aforementioned civil-rights lawsuit will continue to loom.
KEEP WESTWORD FREE... Since we started Westword, it has been defined as the free, independent voice of Denver, and we'd like to keep it that way. With local media under siege, it's more important than ever for us to rally support behind funding our local journalism. You can help by participating in our "I Support" program, allowing us to keep offering readers access to our incisive coverage of local news, food and culture with no paywalls.
Make a one-time donation today for as little as $1.