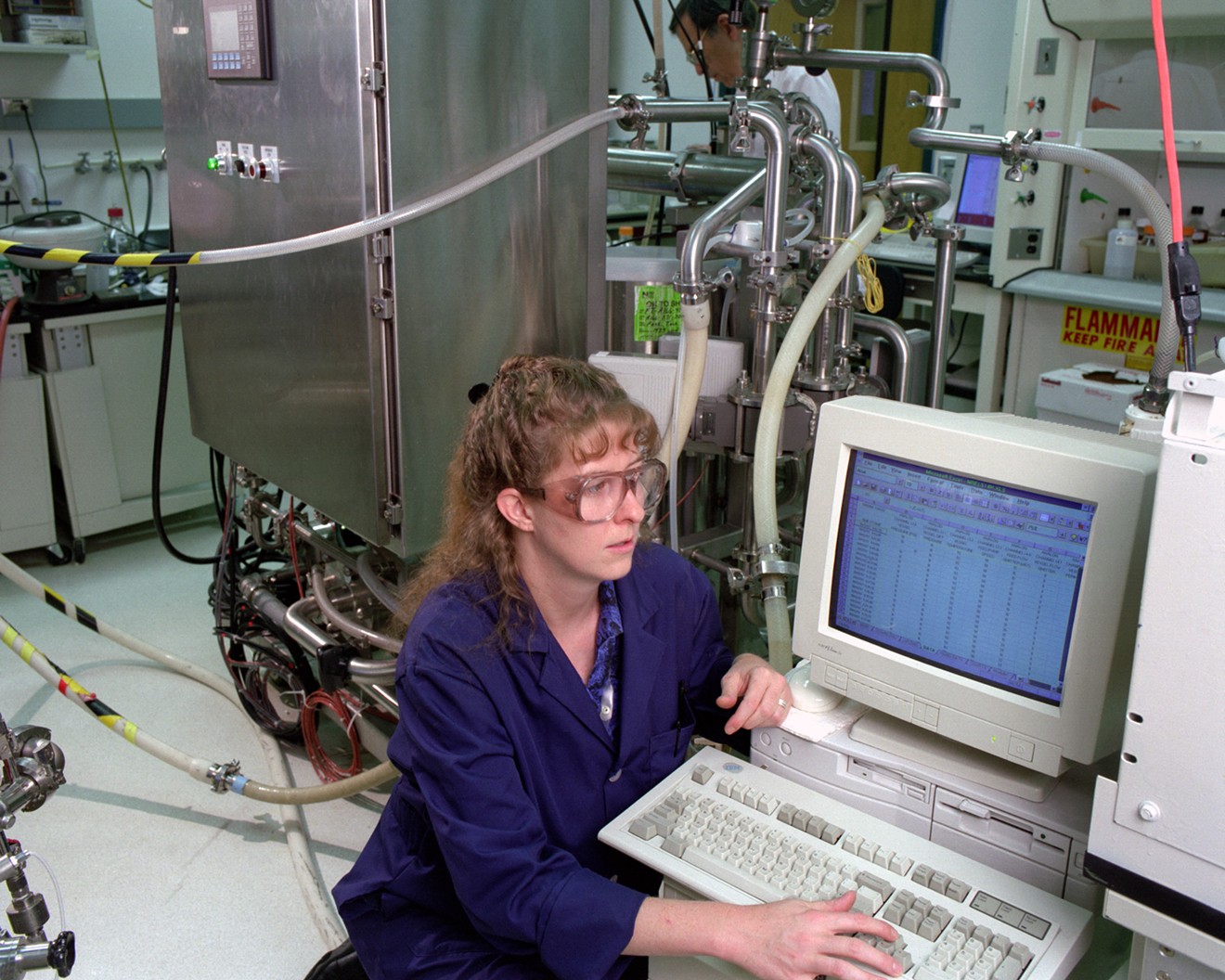 NREL in the early days. National Renewable Energy Lab
Every July 5, the researchers at Golden’s National Renewable Energy Labratory — or NREL — gather in the Science and Technology building to witness something incredible: At 1 p.m., a beam of light slowly makes its way across the floor before brilliantly illuminating the silver, CD-sized medallion that commemorates the lab’s establishment in 1977.

But as the light dawned this Wednesday, NREL’s fortieth anniversary, new challenges await the lab that has led the country in the effort to clean up America’s dirty-energy market: The new presidential administration has proposed a 70 percent cut to NREL's parent agency, and the changing climate is getting out of control.

For forty years, the Golden-based NREL has led the country in providing the foundational technology for innovations in solar, wind, biomass and battery efficiency — all to make renewable-energy companies more successful, one breakthrough at a time. But as the climate begins to change rapidly, researchers are facing new pressures to push America’s energy economy in a new, sustainable direction.

Brent Nelson, a group manager and solar-energy researcher at NREL, says that he personally feels the burden of addressing climate change, which is likely to require new technologies to wean the country off fossil fuels.

“Climate change is a strong motivator to what we do, but it takes decades to change technologies, because we have such massive scales to deal with,” Nelson says. “You can’t just flip a switch.”

The commitment to changing the world through green technologies, in spite of the challenges, is what NREL is nationally known for. In 2014 the lab developed a low-cost water heater that is powered by the sun instead of natural gas; and in January 2016, researchers built what was then the world's most energy-efficient solar panel.

Often, NREL will develop technology that solar or wind companies later take advantage of, nudging the industries closer to a market edge against fossil fuel industries like coal, oil and gas. That’s how Nelson sees the role of NREL in addressing climate change: pushing renewable-energy companies closer and closer to cheap solar and wind power, for example, through technological innovations.

But it isn’t NREL’s style to claim credit for the recent successes of solar and wind. In March, electricity generation from wind and solar surpassed 10 percent for the first time ever, and almost half of all U.S. energy jobs are now in renewables.

“The first guy to bring something to market never makes it,” Nelson laughs, “because they change people’s thinking…. We’re motivated by knowledge, not cranking out a product.”

However, that drive to provide knowledge isn’t always rewarded with funding. In May, the Office of Energy Efficiency and Renewable Energy, NREL’s parent agency, was slated for a 70 percent budget cut in fiscal year 2018 by the Trump administration as part of a broader pivot back toward fossil fuels.

Heather Lammers, an NREL spokeswoman, says that she typically doesn’t discuss budget changes until they actually take place — and as of now, the lab has a typical healthy budget of about $425 million, at least until next October. Morale at NREL is still high, especially with the milestone of surviving forty years.

After inching closer for minutes and minutes, the sun spot finally fell on the commemorative medallion at 1 p.m. sharp. Singing "Happy Birthday" together, NREL personnel looked forward to the next phase of tackling some of the most pressing scientific problems in the world.