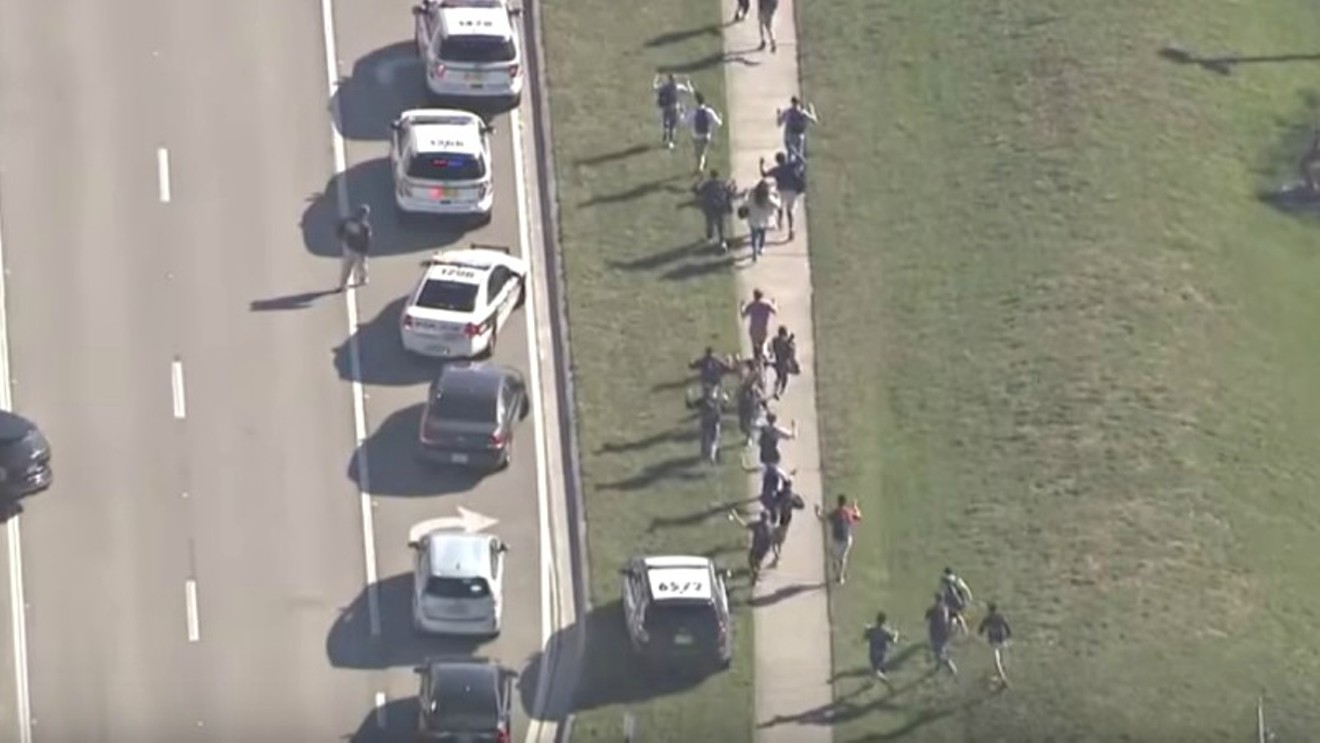 Images from the aftermath of yesterday's school shooting in Parkland, Florida can't help recalling similar coverage during the 1999 attack on Columbine High School. ABC News via YouTube
Reporters and anchors covering yesterday's shooting at Marjory Stoneman Douglas High School in Parkland, Florida, frequently mentioned the disturbing similarity between images from the latest tragic event, during which seventeen people died, and those from the April 20, 1999, attack on Columbine High School in Littleton. But Columbine's terrible legacy has been felt consistently over the intervening eighteen-plus years. As documented below, the Parkland incident was at least the 208th school shooting to take place in Columbine's wake.

Unfortunately, this isn't the first school-shootings rundown we've had to assemble. Our original post, published on April 20, 2009, the tenth anniversary of the massacre, counted 108 school shootings following Columbine. Including incidents noted in a 2012 update, shared after the December 2012 killings in Newtown, Connecticut, and a 2015 post published after the horrific mass shootings at Umpqua Community College in Roseburg, Oregon, there have been another 100 since then.

What follows are brief descriptions from a comprehensive Wikipedia page about school shootings, with four of them having taken place in Colorado post-Columbine.

As you'll see, not all of these shootings resulted in multiple casualties. In some instances, there were no injuries or fatalities. But one of the things that's most shocking about the list is how little publicity many of these examples of on-campus gun violence have received. So common are school shootings that without high body counts, they're treated like typical local news. That's a sad testimony to the size and scope of the problem.

Here's the roster, starting with Columbine and continuing through Parkland. May 20, 1999 Conyers, Georgia
15-year-old student Thomas "T.J." Solomon Jr., wounded six students at Heritage High School. A 15-year-old girl was hospitalized in critical condition, and the other victims suffered from non-life-threatening injuries. Solomon initially faced up to 351 years of prison if convicted of aggravated assault and other charges. In 2000 he was found guilty but mentally ill and was sentenced to forty years in prison and sixty-five years of probation.

December 6, 1999 Fort Gibson, Oklahoma
Before his middle school opened, 13-year-old Seth Trickey opened fire in the courtyard. While there were no fatalities, several students felt sparks from the bullets hitting the building walls. Five were injured, including a girl who was shot in the face. Trickey brought the gun from home.

May 26, 2000 Lake Worth, Florida
13-year-old honor student, Nathaniel Brazill, was sent home for throwing water balloons, but returned to his Lake Worth Middle School with a family pistol. He fatally shot teacher Barry Grunow, a popular teacher, he was Brazill's favorite.

August 28, 2000 Fayetteville, Arkansas
36-year-old James Easton Kelly, a PhD candidate in Comparative Literature at University of Arkansas, killed 67-year-old Dr. John R. Locke, the English professor overseeing his coursework. Kelly had been dismissed from this PhD program for lack of progress toward his degree. Kelly shot Dr. Locke three times before committing suicide in the director's office, which had been isolated by campus police.

September 26, 2000 New Orleans, Louisiana
13 year-olds Darrel Johnson, and Alfred Anderson were initially charged with attempted first-degree murder in the shooting of 15 year-old William Pennington. Pennington, after being shot, managed to gain control of the gun and shoot Johnson in the back. Charges were later reduced to Aggravated Battery.

December 1, 2000 San Diego, California
A 15-year-old Junipero Serra High School student who showed off a handgun on campus and threatened to shoot a classmate, ended up accidentally shooting himself, causing minor injuries.

May 16, 2001 Parkland, Washington
40-year-old music instructor and organist James D. Holloway was shot multiple times with a .22-caliber handgun at Pacific Lutheran University by a 55-year-old man from Tacoma. The shooter was not a student or employee of the university and also killed himself. The victim was apparently chosen at random as the shooter had a personal dispute with a different staff member who was not on campus that day.

January 15, 2002 New York City, New York
17-year-old Vincent Rodriguez, wounded two students at Martin Luther King, Jr. High School in Manhattan, with a semi-automatic pistol. He was retaliating for the victims having harassed his girlfriend. In February 2003, Rodriguez was sentenced to ten years in prison on charges of assault and attempted assault.

June 11, 2002 Conception, Missouri
71-year-old Lloyd Robert Jeffress opened fire at random in the halls of Conception Abbey, a monastery in northwest Missouri. He killed two monks and seriously wounded another two before fatally shooting himself. Two weapons, a Chinese-made replica of the AK-47 and a sawed-off .22-caliber rifle, were found near the body. May 9, 2003 Cleveland, Ohio
On May 9, 2003, Biswanath Halder, a 62-year-old business school alumnus of Case Western Reserve University, killed a graduate student and wounded a professor and another student using a semi-automatic rifle. He held the building and its nearly 100 occupants hostage for seven hours before being apprehended by a SWAT team. He was sentenced to life in prison.

May 7, 2004 Randallstown, Maryland
Two students were charged with a school shooting that arose from a dispute after a basketball game at Randallstown High School. Four persons were injured, two seriously. One student was paralyzed from the waist down.

February 8, 2005 Chicago, Illinois
An 18-year-old student at Bowen High School was shot in the leg as she left the school around 2:30 p.m.

March 2, 2005 Dover, Tennessee
14-year-old Jason Clinard, killed his bus driver, 47-year-old Joyce Gregory, as she stopped to pick him up. Gregory had earlier reported Clinard for using snuff on the school bus. Clinard was given a life sentence.

March 21, 2005 Red Lake, Minnesota
Red Lake shootings: 16-year-old student Jeffrey Weise, killed his grandfather and grandfather's companion at their home, where he had been living, at the Red Lake Indian Reservation. He drove to Red Lake Senior High School. Armed with his grandfather's police weapons, Weise killed five students, one teacher, and one security guard, wounding seven others, before committing suicide.

September 13, 2005 Chicago, Illinois
At Harlan Community Academy High School, a fight broke out between two 15-year-old boys in the gymnasium. Christopher Huff took out a pistol, shooting the other youth in the leg. A police officer on duty at the school arrested the gunman. The suspected shooter was charged as an adult with aggravated battery with a firearm.