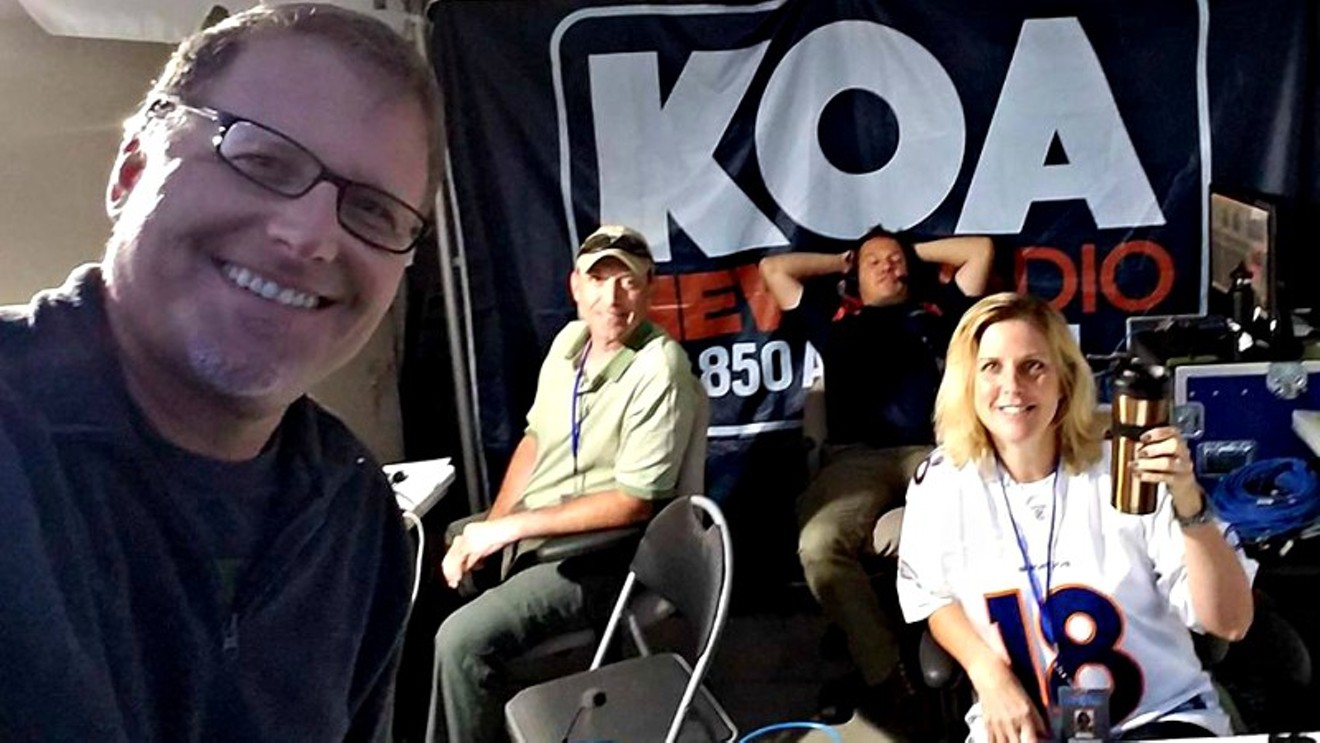 Steffan Tubbs with the Colorado Morning News crew in July, the month before he was fired by KOA. Facebook
Steffan Tubbs will not be rehired by KOA radio, which fired the longtime Colorado Morning News host in August after he was arrested and accused of domestic violence by telephone. This decision was made even though the charge against Tubbs has been dismissed and his accuser was herself busted on November 17 for allegedly stalking him and violating a protection order that forbade her from making contact.

"Since everything went down, I was told, in essence, 'Jump through these hoops, do what we want to see done, and there's a path back for you,'" Tubbs notes. But weeks later, he goes on, "Greg Foster, who was my immediate supervisor and program director, said, 'I'm sorry to have to tell you this, but you're not getting your job back.' And I have yet to hear a reason why."

In response to a question on this subject, Tim Hager, market manager for iHeartMedia's Denver stations, responded via email. "We don't comment on personnel matters," he wrote, "but we will be announcing our plans for the future of Colorado Morning News and the region's news leader, KOA, very soon."

What goes unmentioned in this remark is the public-relations challenges iHeartMedia and KOA would face should executives have invited Tubbs back during a period when sexual-harassment charges against powerful men such as Today show anchor Matt Lauer have made headlines from coast to coast. After all, as Tubbs acknowledges, "There's this thing called the Internet, and my mug shot's everywhere."

Steffan Tubbs with Ed Greene, the CBS4 personality who stepped in for him on an interim basis after the arrest.
Facebook
In addition, a representative for the Denver city attorney tells us an appeal is still pending over a judge's dismissal of the accusation against Tubbs regarding a woman we're referring to as Jen, at her request. Tubbs and his legal team believe Jen's latest arrest undermines this effort. However, Tubbs concedes that the case can be revived at any point within a year of his arrest, which took place over the summer, and this possibility creates the sort of uncertainty most companies dislike.

"I understand the climate in the country right now" surrounding sexual harassment and the like, Tubbs says. "And rightfully so: There should be no place for the sickening stuff that finally came out after not just years, but generations. I get that. But I was a good employee. I was out in the community, and I brought the issue of veterans to the forefront at that station. So the minimum I expected was to hear from the man who ultimately made the decision [Hager]. And I still have yet to hear from him."

At approximately 9:50 a.m. on July 30, as we've reported, Tubbs was taken into custody at Jen's 1650 Wewatta Street apartment complex. Just over a week after news of Tubbs's arrest broke, Hager issued a statement that read in part: "Steffan Tubbs will no longer be part of Colorado Morning News on KOA. We appreciate all of his contributions during his time with us and wish him well."

In the days and weeks that followed, Tubbs alluded to his trouble with the law generically by way of Facebook requests that friends, family and supporters "send your positive prayer and energy to my children, who are collateral damage due to allegations against their dad." But on October 19, he revealed on Twitter that "prosecutors dismissed charges against me today." He added that he wore a purple tie to honor "all DV victims, including me." Following a broken-heart emoji, he concluded with the words "End it." 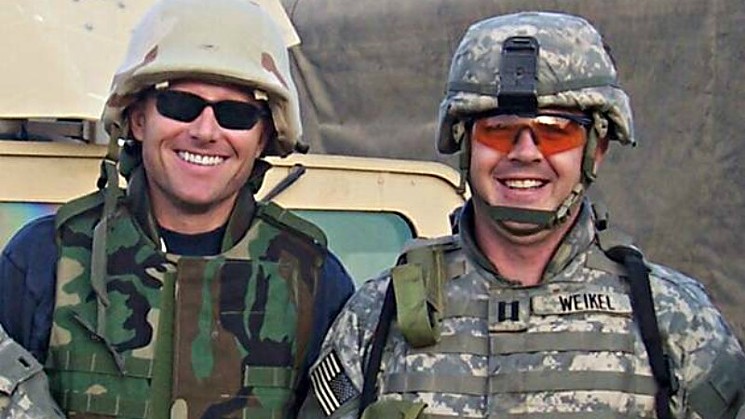 Tubbs, left, is a big supporter of veterans and the military in general.
Facebook
The phrasing of the headline on the Westword post revealing this development — "Ex-KOA Host Steffan Tubbs: Charges Dropped, Calls Himself a Victim" — bothered Tubbs, who stresses that "it's not me who was calling myself a domestic-violence victim. It was the State of Colorado and victims' services in Douglas County" as a result of previous allegations against Jen. According to Tubbs's attorney, Iris Eytan, Jen was arrested on suspicion of harassing Tubbs on June 30, prompting a protection order that she violated just over a week later.

This protection order was still in effect on November 17, when Jen was arrested for breaking it again. Here's Tubbs's version of what happened:

In recent months, Tubbs says, he's avoided going out on the town. But on the 17th, a woman he's currently seeing asked him to accompany her to catch Chase Rice's show at the Grizzly Rose, and after some encouragement, he agreed to do so, heading to the venerable country-music venue in her company and that of a media colleague, Marc Stout of iHeartMedia's Orange and Blue 760. While there, Tubbs tweeted a photo of the Grizzly Rose's mechanical bull in a note about being at the concert.

During the show, Tubbs continues, "we were on the floor — and whenever you're down there, you get bumped and pushed and spilled on. We've all been there. That's part of the experience. But about midway through, I got pushed from behind pretty severely. It wasn't a normal bump. It was basically a shove. It was enough to turn my body completely to the left, and the woman I was with was turned to the left as well. Now, your natural reaction when something like that happens is to look up and to the right — like, 'Who the hell is bumping into me?' And when I did, Jennifer was staring right in my face from a foot away." 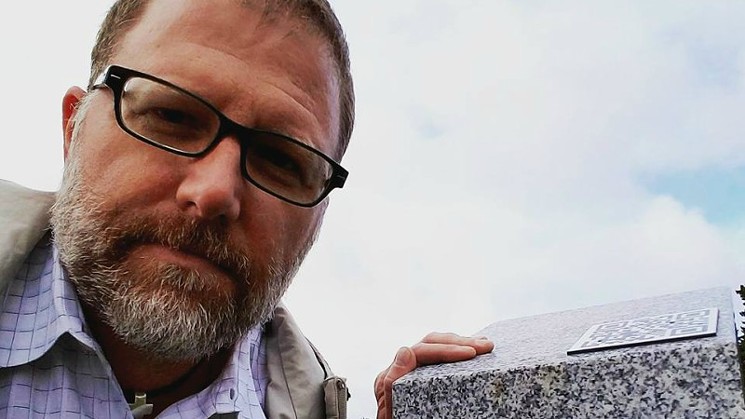 Steffan Tubbs during an October visit to a graveyard near Paris, France.
Facebook
He doesn't know if Jen came to the concert after seeing his tweet or if her presence at the Grizzly Rose was entirely coincidental — "but it freaked me out," he allows. "As she was going back into the crowd, I said to the woman I was with, 'My God, that was her.' And the woman I was with knows the nuts and bolts of what's going on, but she had never seen Jennifer. And she said, 'My God, that same woman came walking through the crowd the other way and basically mad-dogged me.' She basically stared her up and down — and then five minutes later, she runs into me."

Now thoroughly unsettled, Tubbs informed security about Jen's presence and was told staffers would take care of the situation. But they couldn't locate her, so Tubbs "called my best friend, who's in law enforcement in Oregon, and asked what I should do. And he said, 'Call 911, so you make sure everything is documented.'"

Tubbs took his advice, and shortly thereafter, deputies from Adams County, where the Grizzly Rose is located, arrived at the scene. The deputies were still looking for Jen when Tubbs says he saw her dancing with a date five feet away "as if to say FU. I said to one of the deputies, 'She's right there.' I guess she saw the deputy, because she tried to disappear into the crowd again, but less than five minutes later, the woman I was with came up to me and said, 'They got her.'"

Sue Lindsay, spokesperson for the 17th Judicial District DA's office, confirms that Jen was taken into custody on suspicion of misdemeanor harassment and violating the protection order. Her next court appearance, for a disposition hearing, is scheduled for January 22, 2018. 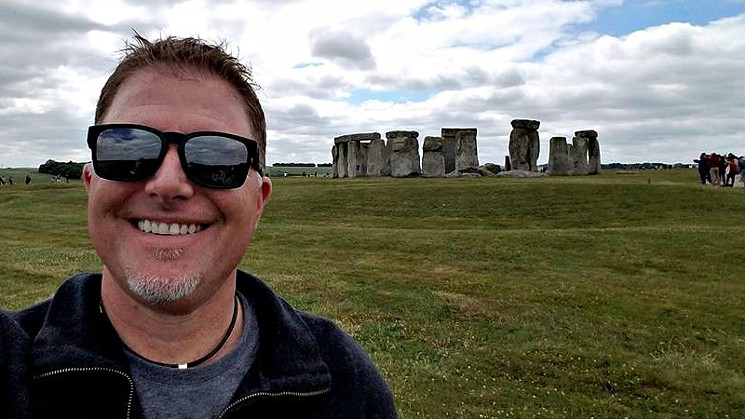 A Steffan Tubbs self-portrait taken at Stonehenge earlier this year.
Facebook
In the meantime, Tubbs is assessing next steps in his career. He remains dedicated to a program called The American Veteran Show and he's working on a documentary called 25 Steps that's slated to debut next year. But he wants to get back to work in broadcasting, and he's hoping he'll be able to do so here.

"I'd love to stay in Denver," he emphasizes. "This has been my home. I have incredible contacts with incredible individuals, including veterans and veterans' groups that are close to me. I'd love to stay here in the media. But next month is my 28th anniversary of being in the news business — I'm going to be 49 in February — and I'm not going to be a general-assignment reporter at Channel 9 covering a single-structure fire. No offense, but I've done that. I've been a national correspondent, I've worked in New York and Los Angeles. So that limits my options."

As a result, Tubbs is also looking for employment beyond the Mile High City — "which is frustrating, because I'll have a kid in college in less than a year, and I also have a freshman currently in high school. And I don't want to be the dad who flies in every other weekend; that's not me. In my entire career, I've never missed a milestone — a birthday, a graduation, an anniversary when I was married — and I don't want to start now."

He insists that "I'm not crying in my beer" because Hager hasn't spoken to him personally about the nix on rehiring, which he says he heard about weeks after a decision was supposed to be made, and then only because he reached out to program director Foster. "But I've basically been at KOA for sixteen of the last 24 years, and after loving my job and loving the station and trying to make a difference, I expected to be treated with a little bit more respect when it came to letting me know if I had a job. To me, it was totally classless."