Steve Kelley Leaves KNUS: Is This It for the Denver Radio Legend? 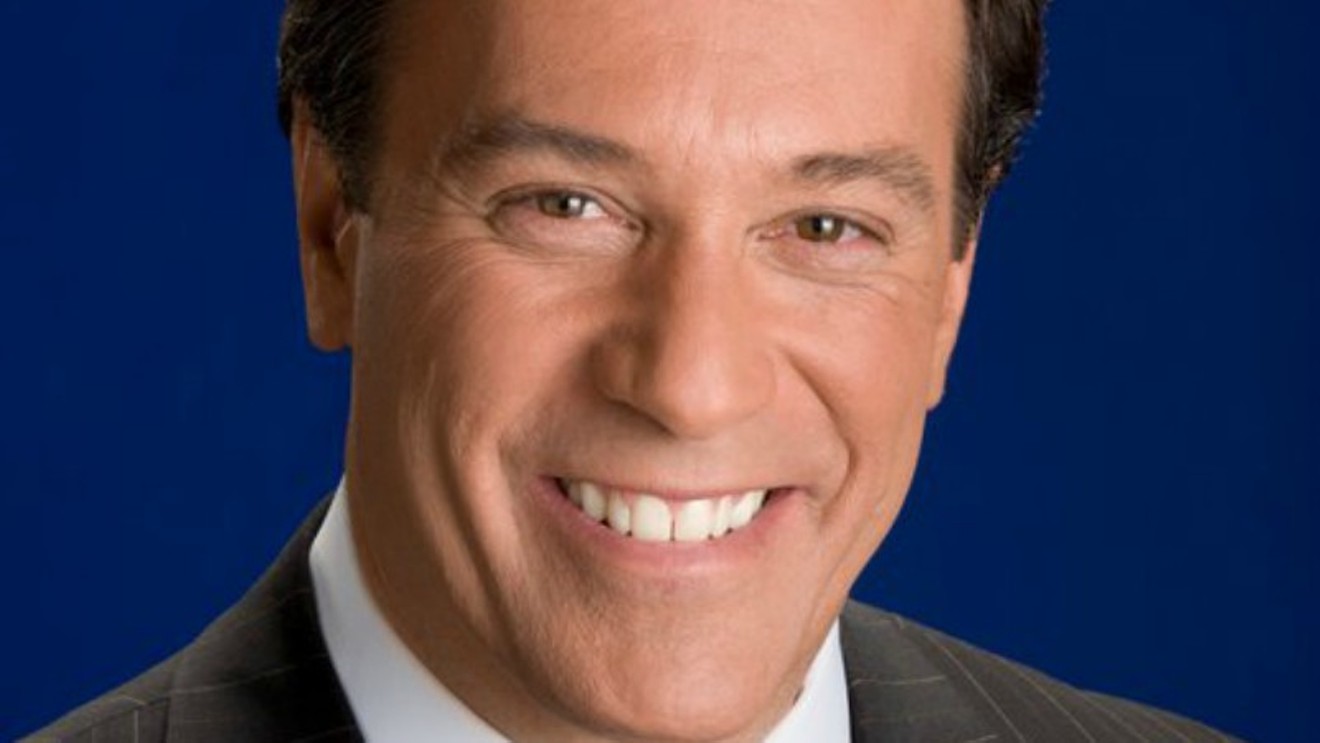 Steve Kelley's Facebook profile pic. Facebook
Steve Kelley, a Denver broadcasting legend who's spent decades in the local market at radio stations such as KIMN and KOA, not to mention a high-profile gig at Fox31 that ended with a lawsuit, has left the afternoon-drive show on KNUS he co-hosted with Krista Kafer. According to a station executive, he made the move for personal reasons, raising questions about whether he's stepping away from the microphone once and for all.

Although Kelley has spoken with Westword frequently over the years, he hasn't returned calls about his KNUS departure at this writing. However, Brian Taylor, GM at the station, as well as regional vice president for Salem Media, which owns the outlet, stressed that "this was Steve's decision. Steve wants to spend more time with his family."

Kelley, whose given name is Tim Kuzava, didn't initially aim for a career in the media. As he told the audience at a benefit luncheon back in 2006, he made his broadcasting debut in high school; he was ordered to read morning announcements over the intercom as punishment for talking in class. But he soon caught the radio bug and managed to parlay a gig as a janitor at WTRX in his home town of Flint, Michigan, into an on-air position when an announcer on the night shift didn't show up as scheduled. Kelley volunteered to step in and said he was given two air names from which to choose: J.J. Jefferies or Steve Kelley.

After opting for the latter moniker, he began to climb the radio ladder. By the mid-’70s, he was a mid-day jock at WLCY in Florida, after which he headed to Colorado. He made his first major splash as a disc jockey at KIMN during a period when it was among Denver's most popular stations, before eventually taking over the morning show at KOA, where he became renowned for stunts staged for charity. On Facebook following Kelley's announcement, his daughter, Jenna Jo Kuzava, shared a photo collage of her dad along with a roster of memorable moments. Here's an excerpt from the post: 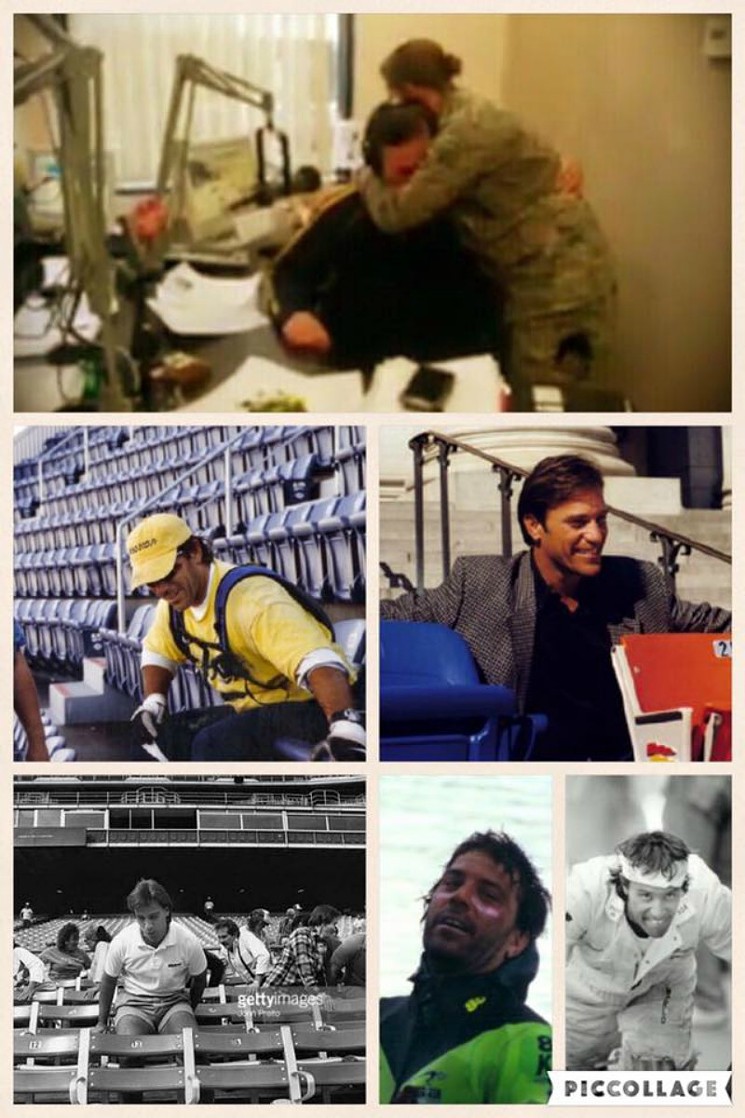 Memories of Steve Kelley as shared by his daughter, Jenna Jo Kuzava.
Facebook

30+ years in the media industry. You want a role model? Well here he is.

Repeated the feat 20 years later at what is now Sports Authority Field at Mile High, finishing exactly one day before 9/11/2001.

17 Mile crawl on hands and knees

Pogo Sticking 43 miles from Boulder to Denver, and finishing in a rare spring blizzard

Completed the longest continuous hole of golf… 55 miles across the city.... (Lost 600 balls!)

These and many more stunts have helped raise well over 2 Million dollars for many great causes….

In 2005, Kelley left KOA to host Good Day Colorado on Fox31. Three years later, he was ousted in a cost-cutting move that completely blindsided him. "It was a shock — something my wife and I didn't expect," Kelley told us for a December 2008 item. "We're coming up on our 25th wedding anniversary, and we've been making preparations to celebrate that — and my son is coming back from the Navy, and my other son is coming home from college. I even had two weeks of vacation time coming up. And then, three weeks before the holidays, to have it end like that..."

In the years that followed, Kelley filed a breach-of-contract suit against Fox31 that was settled out of court. Then, in 2011, he resurfaced on KNUS in a morning show called Kelley and Company. Two years later, Peter Boyles, who joined the station after his controversial firing from KHOW, took over the early slot, and Kelley shifted to the afternoons. He's most recently been teamed with Kafer, whose future at the station is now in limbo. 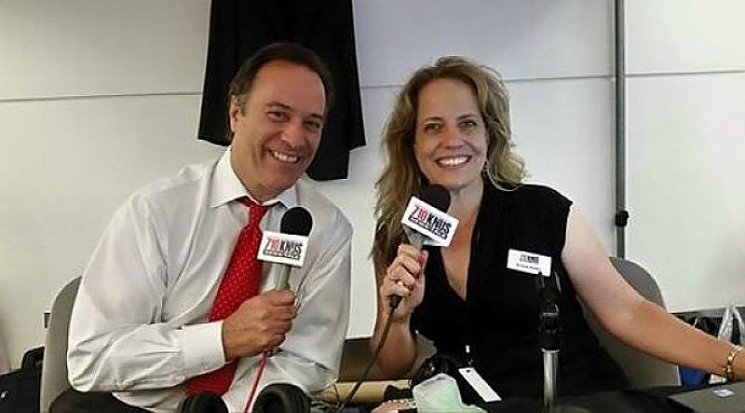 Steve Kelley and Krista Kafer at KNUS.
Facebook
After Kelley informed the station of his wishes, GM Taylor says, "We cancelled the show, and that ended the agreement. As far as what we're going to do with the afternoon show and if there's a place for Krista, we'll reassess that. But this isn't about performance or anything like that."

As of July 12, Kelley's time period is being filled by Chuck Bonniwell, owner and publisher of the Glendale Cherry Creek Chronicle, and Julie Hayden, a former Fox31 reporter; they also team on Weekend Wakeup With Chuck and Julie, which airs Saturday mornings on KNUS. But Taylor says this arrangement is temporary and he's looking for a permanent replacement.

Taylor's preference would be to launch a new live-and-local program, but he doesn't rule out the possibility of using a syndicated show during this time period; KNUS currently airs nationally known conservatives such as Dennis Prager and Hugh Hewitt, along with Boyles and Dan Caplis, both longtime Denver-area staples. (Craig Silverman, Caplis's former partner at KHOW, also has a Saturday show on the station.) Taylor hopes to have something new in place by Labor Day, which he sees as "a good time for a fresh start."

In the meantime, Taylor sings Kelley's praises. "He has such an amazing history in our market," he notes. "When you think back about some of the things he did to support charities and some of the stunts he did, they were truly unique. And back in the KIMN days, he had a fifty share, which is just outrageous. He's just been a winner wherever he's gone, and it's been really neat to be able to work with somebody who has accomplished so much."

The scenario leaves listeners to wonder what's next for Kelley — and whether it will have anything to do with radio or television. His daughter concluded her Facebook item with these words: "Dad, all these accomplishments don't even compare to how great of a father you have been to us. I love you and I'm so proud to have you as my dad. Now I'm excited to see what God has in store for you and our family :) Let the adventure truly begin."