Thinkstock file photo
In June, the U.S. Supreme Court announced that it would consider whether Denver's Masterpiece Cakeshop discriminated against a gay couple, Charlie Craig and David Mullins, by refusing to make them a wedding cake just over a year after the case was rejected by the Colorado Supreme Court. Now, the administration of President Donald Trump, as represented by the Department of Justice, has weighed in, filing an amicus brief that sides with baker Jack Phillips, who says the denial was based on his religious beliefs.

Among the arguments in the document, accessible below, is that forcing Phillips to make the cake would violate his right to free speech. The document also suggests that U.S. law doesn't put opposition to same-sex marriage on par with racism or other societal ills defined as compelling national interests, and even if it did, Phillips's actions took place at a time when the State of Colorado didn't allow such unions.

As we've reported, the original incident took place back in 2012, and in May 2014, the Colorado Civil Rights Commission found that Craig and Mullins had been victims of discrimination. In that hearing, as former Westword staffer Melanie Asmar reported at the time, Commissioner Susie Velasquez said that because Masterpiece Cakeshop is a "public accommodation" under the law, it is barred from discriminating against same-sex couples. "It should be open to everyone," she said.

"If a cake shop said, 'No, I don't bake cakes for Hispanics,' that would be the same," added commissioner Diann Rice, speaking in agreement with Velasquez. 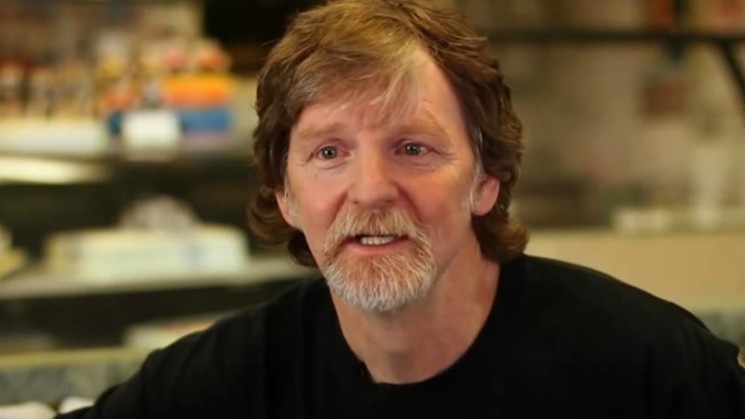 Masterpiece Cakeshop owner Jack Phiillips.
CBN file photo via YouTube
"It's not an issue of free speech," said commissioner Raju Jairam. "I can believe anything I want to believe, but if I'm going to do business here, I'd better follow the law."

In April 2015, Phillips's legal team, from the faith-based Alliance Defending Freedom, asked that the matter be brought before the Colorado Court of Appeals. Here's a summary of their arguments at the time:


(Phillips's) work is intimately connected to his faith. He believes God granted him artistic and creative abilities and that he is religiously obligated to use those abilities in a manner that honors God. He thus declines to create cakes that convey messages that are contrary to his religious convictions, like those celebrating atheism, racism, indecency, or Halloween.

Nor will Phillips create wedding cakes honoring same-sex marriages, regardless who orders them, because Phillips believes that God ordained marriage as the sacred union between one man and one woman.

There are some 300 other bakeries in the Denver area that are available to fulfill such requests. The State has no vital interest in compelling Phillips personally to provide such a non-essential service, especially when scores of other bakeries are ready and willing to do so.

Phillips is forced to choose between following his religious beliefs or staying in business. No state should put its citizens to such a Hobson’s Choice.

Granting Phillips’ request that CADA (Colorado's Anti-Discrimination Act) be enforced in a manner that respects his free speech and free exercise rights will not undermine the protections public accommodations and other laws provide against discrimination. It will simply recognize and reaffirm that such laws violate the First Amendment when they are “applied to expressive activity.”

And its scope would be limited to those businesses that create and sell expression.... It would thus protect the right of Colorado baker Marjorie Silva to decline to create a cake that references biblical teaching about sex and marriage based on her “standards of offensiveness,” or a gay Colorado photographer to decline an offer from Westboro Baptist Church to shoot photos at its latest demonstration.

None of these assertions held water with the Colorado Court of Appeals, whose August 2015 decision was unanimous. The ruling concluded that "Masterpiece remains free to continue espousing its religious beliefs, including its opposition to same-sex marriage. However, if it wishes to operate as a public accommodation and conduct business within the State of Colorado, CADA prohibits it from picking and choosing its customers based on their sexual orientation."

Charlie Craig and David Mullins, whose request for a wedding cake was refused by Masterpiece Cakeshop.
Denver7 file photo
But the Alliance Defending Freedom didn't accept defeat, and during a teleconference that followed the U.S. Supreme Court's decision to hear the case, ADF senior counsel Kristen Waggoner maintained that "Colorado's anti-discrimination laws have been used in Jack's case to silence and punish him."

The aforementioned Department of Justice amicus brief concurs on several grounds, including ones pertaining to the First Amendment. "A custom wedding cake can be sufficiently artistic to qualify as pure speech, akin to a sculptural centerpiece," one section states. "With Phillips, for example, the functional task of baking is only one component of a larger artistic process: He consults with his clients, sketches the cake design or utilizes a prior one, bakes the cake, sculpts it into a particular shape if necessary, creates and colors the frosting and decorations, and assembles and decorates the cake. Thus, just as a painter does more than simply apply paint to a canvas, a baker of a custom wedding cake does more than simply mix together eggs, flour, and sugar: Both apply their artistic talents and viewpoints to the endeavor."

The brief adds that "like other creative efforts, a custom wedding cake may also contain features that are unquestionably speech. It might include an inscription such as 'God blesses this marriage'; an image such
as a couple embracing in front of a cross; or a symbol such as the rainbow-colored layers in the cake that Craig and Mullins used at their wedding celebration. In short, a custom cake with particular words or symbols that he finds objectionable. To be sure, the court suggested that Phillips could permissibly decline to inscribe a message that he would not write on any cake — e.g., 'God blesses same-sex marriages' (noting that a bakery may refuse service based on the 'nature of the requested message'). But if Phillips would write the message on an opposite-sex couple’s cake — e.g., 'God blesses this marriage' — then a wedding cake is not an ordinary baked good; its function is more communicative and artistic than utilitarian."

What if a majority of U.S. Supreme Court jurists don't buy these assertions? The DOJ is ready with an alternative. "Even if a custom wedding cake is not pure speech, Phillips’s act of designing and creating the cake is at least expressive conduct," the brief continues. "That act involves both a subjective intent to convey a message and a significant likelihood that the message will be understood by those who view the final product. Here, Phillips avers that '[a] wedding cake communicates that a wedding has occurred, a marriage has begun, and the couple should be celebrated,' and that to create a wedding cake for Craig and Mullins would have constituted 'a personal endorsement' of their marriage.' Under the circumstances of this case, that is sufficient to satisfy the subjective component."

The Colorado Civil Rights Commission.
Denver7 file photo via YouTube
The document adds: "By producing a custom wedding cake for that ritual, Phillips participates in the wedding celebration in a meaningful way. Even though he may not always remain physically present at the wedding, he crafts and delivers his creative expression to the event. And his handiwork enables — indeed, plays a central role in — a uniquely expressive ritual. In that sense, Colorado’s public accommodations law compels Phillips not just to create expression but also to participate in a wedding celebration that conflicts with his sincerely held religious beliefs."

That isn't to say "that every application of a public accommodations law to protected expression will violate
the Constitution," the brief acknowledges. "In particular, laws targeting race-based discrimination may survive heightened First Amendment scrutiny. As the Court recently observed, 'racial bias' is 'a familiar and recurring evil' that poses 'unique historical, constitutional, and institutional concerns.' As such, 'eradicating racial discrimination' in the private sphere is the most 'compelling' of interests."

However, the text goes on, "the same cannot be said for opposition to same-sex marriage. The Court has not similarly held that classifications based on sexual orientation are subject to strict scrutiny or that eradicating private individuals’ opposition to same-sex marriage is a uniquely compelling interest. To the contrary, the Court has recognized that opposition to same-sex marriage 'long has been held — and continues to be held — in good faith by reasonable and sincere people,' and that '[m]any who deem same-sex marriage to be wrong reach that conclusion based on decent and honorable religious or philosophical premises.' Indeed, when Phillips declined to create a custom wedding cake for Craig and Mullins in July 2012, Colorado refused to recognize either same-sex marriages or same-sex civil unions. In other words, the State itself did not acknowledge the validity of the union it sought to compel petitioners to celebrate. It was not until October 2014, after federal courts had ruled that Colorado’s same-sex marriage laws were invalid, that the State began issuing marriage licenses to same-sex couples. Especially given that background, the State has not advanced a sufficient state interest to override petitioners’ weighty First Amendment interest in declining to create the expression at issue here."

The Trump administration's de facto support of intolerance toward same-sex marriage has riled up plenty of critics, including Democratic National Committee head Jess O'Connell. A statement released in the wake of the brief's filing reads in part: "Discrimination is not a constitutional right. This case is just the latest attempt by the Trump administration to undermine our nation's progress toward LGBTQ equality. Over the past eight months, this administration has withdrawn federal protections for transgender students; they’ve argued in court that a landmark civil rights law doesn’t protect gay and lesbian people from discrimination in the workplace; they’ve issued an order banning transgender troops from serving in the military; and now, Trump’s DOJ is defending discrimination against LGBTQ couples at the Supreme Court."