Jessup Farm Barrel House is one of Colorado Craft Distributors' first clients. Jonathan Shikes
Craft beer has always been about the little guy. That’s part of its appeal, part of what attracts people — not just to the breweries themselves, but to the culture around them. So it makes sense that a tiny craft-beer distributor might be able to forge a path as well, even as the industry itself has grown into a multi-billion-dollar behemoth.

In December, Tom Jasko and Christopher McGraw opened Colorado Craft Distributors in a big warehouse in west Denver with hopes of serving a niche market of small but special breweries looking to get their names — and their beers — into liquor stores, bars and restaurants along the Front Range.

“The big guys do a great job, but they have a lot of companies in their portfolios,” Jasko says about the larger craft-beer distributors. “We are small, a mom-and-pop operation, and we can provide a lot of attention. As our breweries grow, we grow with them.”

The company's collection of clients so far is an odd but interesting group. It comprises six small breweries that make fewer than 4,000 barrels — or about 6,000 kegs — of beer per year combined: Caution Brewing in Lakewood; Horse & Dragon Brewing in Fort Collins; Lost Highway Brewing, which is moving from Denver to Centennial; Oasis Brewing, which will open a taproom in West Highland this spring; De Steeg Brewing in Denver; and Jessup Farm Barrel House, also in Fort Collins. 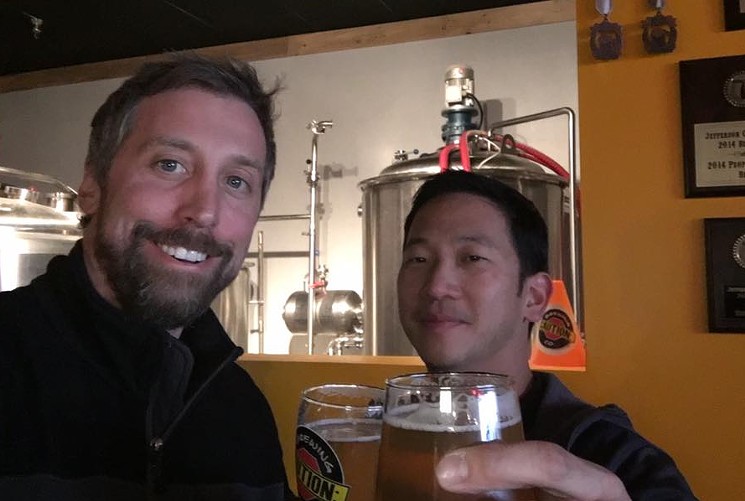 Tom Jasko (left) with Caution Brewing owner Danny Wang.
Colorado Craft Ditsributors Facebook page
“We are trying to create a portfolio that makes sense stylistically,” Jasko says. For instance, Oasis is an “entry-level” brewery that makes beer for people who are just getting into craft, while Caution brews beers with a variety of unusual spices. Jessup is focused on sessionable wooden-barrel-aged creations, while DeSteeg does Belgian-style saisons.

“We are hoping to add three to four more breweries by summer,” adds Jasko, who is in negotiations with several other beer makers. “We will probably cap it at around twelve.”

Jasko and McGraw are getting into the business at a time when brewery access to the market has become a hot talking point in the craft-beer industry.

Last year, Governor John Hickenlooper signed a law into effect that will allow large grocery and supermarket chains to eventually sell full-strength beer in more locations; until then, they had only been allowed to carry beer above 4 percent ABV at a single store for each chain.

Many craft brewers had fought the idea for years, saying that it will put hundreds of liquor stores out of business and limit the number of places where they can sell beer.

Beers from Caution Brewing and Lost Highway are ready to go.
Jonathan Shikes
Craft breweries, which already have to fight against huge brands like Budweiser, Coors, Miller and Corona, are also feeling the pinch from Anheuser Busch InBev, which has purchased nine craft breweries in recent years; many smaller breweries feel that AB InBev, which makes Bud, exerts significant pressure on bars and restaurants to only accept its “craft” brands at the expense of independent craft breweries of all sizes.

There is also competition from other distributors, both large and small, like Breakthru Beverage, Elite Brands of Colorado, and two small distributors that are owned by breweries: Tivoli Distributing Company and Crooked Stave Artisans.

But Jasko says it was now or never for him and McGraw. The two met several years ago while Jasko, who has spent nearly two decades in the distribution business, was working for a specialty beer importer and McGraw was working as a beer buyer for a large liquor store. In 2015, they decided to create a plan for a company of their own. After getting advice from a similar small distributor in New York that Jasko had worked with previously, they finally got things up and running in December.

“There’s a lot that goes into starting a distributorship,” Jasko says. There were months of government red tape.” To pay for it, the two got an SBA loan, while Jasko and his wife put their house up for collateral. But they hope it will be worth it.

“I really see something developing here,” Jasko says. “We are up for the challenge.”