Review: Make Yourself at Home at Acres, a True Neighborhood Spot 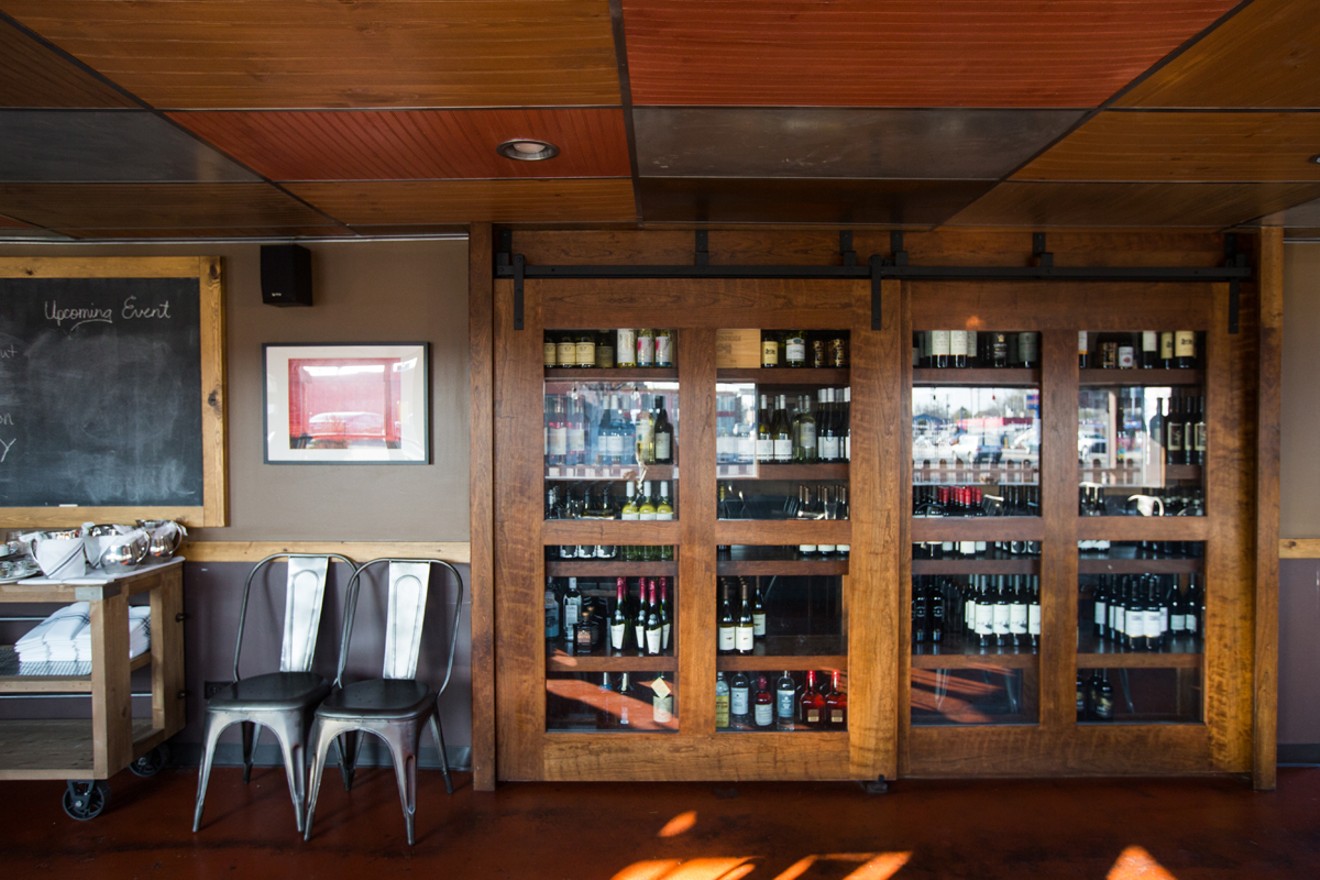 A modest but warm interior is part of the welcoming vibe at Acres. Danielle Lirette
The scene unfolding at a little table by the window wouldn’t have surprised me in a high-end restaurant or wine bar. But I was at Acres, a neighborhood spot so humble it could pass for a small-town barbecue joint. Black-and-white photos of barns and windmills hang above tables made of repurposed 2x6s. Corrugated metal from an old barn runs in rivulets on the walls. Bare windows reflecting the open sign’s neon glow look over a stretch of South Broadway that’s home to reptile stores and auto shops. It’s the last place I would have expected a server to expertly read a table, but there he was, defusing what could have been an embarrassing situation.

When the server had asked a young man, clearly on a date, what he normally drinks, the guy had paused. “Red, I guess,” he finally replied. “I’m more of a beer drinker.” At that point, the server could have upsold the most expensive red or left the young man alone with the wine list. (Not that being directed to the Acres wine list would have been so bad; the list is hardly threatening, with nearly all wines available by the glass and tasting notes for each.) Instead, he spent a few more minutes at the table, then brought a complimentary flight and guided the couple through it, both relief and discovery playing across their faces. That was just one of many encounters at Acres that showed that hospitality is alive and well in this town. 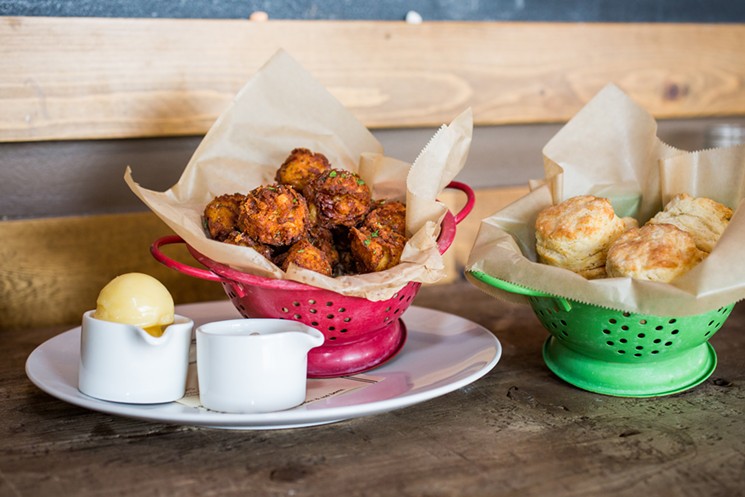 Tater tots and biscuits are both craveable starters at Acres.
Danielle Lirette
We think of hospitality as good service, but hospitality is about more than refilling water glasses, replacing utensils and clearing plates. It’s about going out of your way to make people feel welcome. The hearty hello offered by owner John Benson — longtime beverage manager at Le Central and curator of the aforementioned wine list — sets the tone. Servers continue it, turning a question about what they’d recommend into the sort of good-natured exchange that knits communities together. They seem genuinely concerned when asked about a possible allergen, running to the kitchen repeatedly to check ingredients. Not once did I have to flag someone down or quash a question because the server had already turned to leave, even on a busy Saturday night.

Ultimately, every time the door closed behind me as I left after a meal at Acres, I felt more relaxed — a feeling shared by everyone who’d been around the table. “I wish we lived in the neighborhood,” one friend commented as he got into the car. And isn’t that what distinguishes the best neighborhood spots? Not just proximity to home or reasonable pricing, but the way they fill you up and leave you feeling better than when you walked in.

By “fill you up,” I’m referring to a deeper sense of nourishment, the kind you get from people who aren’t too busy to talk to you, to see that you are comfortable. But Acres succeeds in the literal sense as well, with a hearty menu of rustic, down-home fare executed by chef Dylan Mullins, who took over the kitchen shortly after Acres opened in 2015. Start with an order of biscuits, even if they’re not what you typically pair with wine. Made with so much butter that they smell like that rush of goodness when you step into a bakery as the ovens are going, the pale golden rounds separate into irresistibly flaky layers. Stop whatever you’re talking about to eat them hot, so the accompanying honey butter can melt as you spread it. “I can’t tell my grandma,” admits chef Mullins, a Virginia native who graduated six years ago from Le Cordon Bleu, “but these are better than her recipe.” Tater tots, delivered in a small colander that adds to the restaurant’s homey style, are another must-order, even if you’re moving on to entrees rather than making a meal of small plates. Thoroughly crisp, studded with cheddar and dipped in a side of garlic aioli, they’re a step above the ones you loved in childhood, but not so far above as to be unrecognizable. “I don’t want things piled up and decorated,” says Benson, who named the restaurant for the wide-open acres in Missouri where he grew up. “I want the food to speak for itself.”

Acres makes you feel right at home.
Danielle Lirette
Given the team’s background, it’s not surprising that the menu skews country. But it has enough creative highlights that even the distinguished older couple who sat near me one night — he in coat and tie, she in a dress with a fuzzy white wrap — could pop in for a pre-concert meal and not seem out of place. A Caprese salad features mozzarella layered with basil and fried red tomatoes, which puts less-than-perfect, off-season tomatoes to good use. I’ve always wondered why more chefs don’t use a similar trick; the standard Caprese is really only good in those few short weeks when tomatoes are at their sweetest peak, but it often appears on menus far past that. Fried carrot strips and sunflower seeds add sweet, earthy crunch to a seasonal classic of butternut-squash soup. Artichoke hearts battered with flour laced with onion, garlic and smoked paprika vie with biscuits for starter of choice. Oversized gnocchi, toothsome from potato mixed into the dough, star in a cheddar riff off macaroni and cheese topped with toasted biscuit crumbs.

In a world where you’re increasingly nickel-and-dimed, with proteins coming solo and sides costing extra, the generous entrees are downright old-school. Pan-fried ruby trout is terrific, filleted so that you don’t have to wrestle with the head, with well-crisped bottom skin and a pat of herb-rich compound butter melting over the top. The risotto that comes with it, laden with corn and flash-smoked cherry tomatoes, is so generously portioned, your second helping — or tomorrow’s lunch — is already on the plate. A bone-in pork chop, hatched with grill marks, is winsome with au gratin potatoes and smooth Dijon gravy that you’d be wise to order more of, right from the start. The chef adapted the recipe from a previous high-end gig, where he paired it with biscuits at breakfast. In such a humble yet high-achieving spot, it’s easy to forgive the occasional flub, such as a gummy risotto and sausages that seep liquid after being reheated in a water bath.

“If you like my little joint,” says Benson, who also lives in the neighborhood, “let’s hang out.” Given how satisfied you’ll feel when you walk away from Acres, that’s an invitation you’ll want to accept.