Adam Avery (left), Eduardo Petrossi and Larry Avery toast the deal. Mahou San Miguel
Avery Brewing, which has been one of Colorado's most unconventional beer makers for the past 25 years, has sold a minority stake of its business to Spanish brewing conglomerate Mahou San Miguel. The billion-dollar company also owns a 30 percent stake in Michigan's Founders Brewing, which it bought into in 2014.

"At this time, we cannot disclose the financial details of the agreement, but I want to reiterate that it is a minority investment, and Adam Avery and Larry Avery will still continue to lead our brewery," brewery spokeswoman Vanessa Cory said in a statement, adding that Mahou San Miguel is also a family-owned company.

The deal isn't a surprise. Avery spent $30 million on a state-of-the-art brewing campus and restaurant, which it opened in 2015, just as sales for many medium-sized and large breweries began to slip in the face of increasing competition. Avery has also streamlined its portfolio over the past two years, jettisoning many of the unusual seasonal releases it had used to build its reputation in favor of more marketable year-round offerings.

“Dad and I decided two years ago that in order to fulfill our vision of the new brewery and all of Avery Brewing’s potential, it made a lot of sense to seek a partner,” brewery founder Adam Avery added in the statement.

"We didn't have to do the deal," he tells Westword. "We wanted to do it. Yes, we had a lot of debt, but it was manageable." Avery says the brewery has continued to grow by double digit numbers, but that the competitive landscape has changed more in the past three years than it had in the previous twenty. "It's a scary landscape. There are a lot of dollars being thrown around and a lot of breweries working to gain market share and control. This will help us go into battle every day." 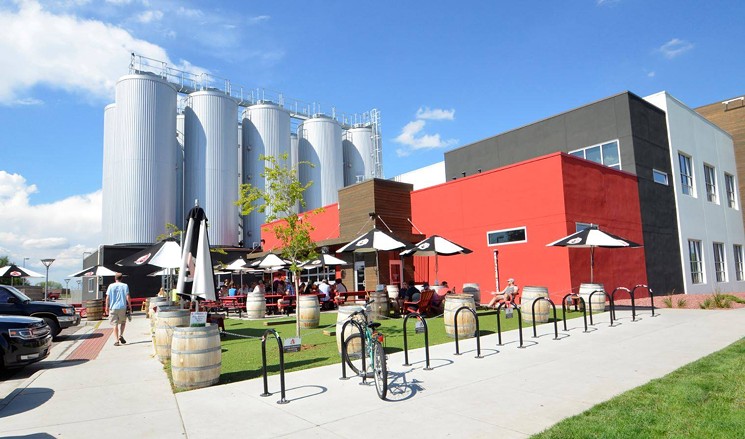 Avery opened its new campus in 2015.
Avery Brewing
Before the transaction, the father and son Avery team established criteria for a perfect partner: privately held and family-owned, offering a long-term investment and strategic advantages, made up of good people with shared values, and agreeable to purchasing only less than 50 percent of Avery. "Mahou San Miguel emphatically checked all of those boxes for us and is our ideal partner for continued growth, remaining faithful to our beers and our culture," Avery continues. "We took a lot of meetings and we listened to a lot of people, but nobody else came close." Avery and Mahou then spent nine months getting to know each other.

Avery is far from the first Colorado brewery to sell off a stake of its business. Oskar Blues Brewing in Longmont, Funkwerks Brewing in Fort Collins and Renegade Brewing in Denver have all taken on outside investments, while Breckenridge Brewery was purchased outright by Anheuser Busch InBev.

First founded 127 years ago, Mahou San Miguel has 3,000 employees working at seven plants in Spain and one in India (along with a water bottling business). In 2016, the company made roughly 11.5 million barrels of beer, including Mahou Cinco Estrellas, San Miguel Especial and Alhambra Reserva 1925.

“This new alliance, between two family companies, has been possible thanks to the passion we share for beer and tradition, and that we have similar values," Mahou San Miguel CEO Eduardo Petrossi added in a statement. "We share the commitment with the communities in which we are present, our long-term vision, concern for the development and well-being of individuals and our aim of doing things right, placing the consumer always at the center of our decisions. Avery Brewing stands out due to the excellence of its beers, recognized on numerous occasions, with a focus on tradition, but also innovation, ingenuity and creativity."

One of the first things Adam Avery plans to do with the money is to write "appreciation checks" to every one of his employees, based on how long they have been with the company.

After that, he plans to significantly ramp up marketing and advertising, something that the company has never focused on in any measurable way. "We have a good story and we want to get it out there," he says. So Avery has hired Honeymoon, a new Boulder ad agency to "feed that story" to the beer fans in America.

The brewery will also focus on expanding its presence in the 39 states where it currently distributes — and possibly adding a few foreign countries to its footprint. And Avery himself doesn't plan to step back. In fact, he says Mahou has "put a lot of trust in me to carry out the map I gave them, so I'll be working harder."