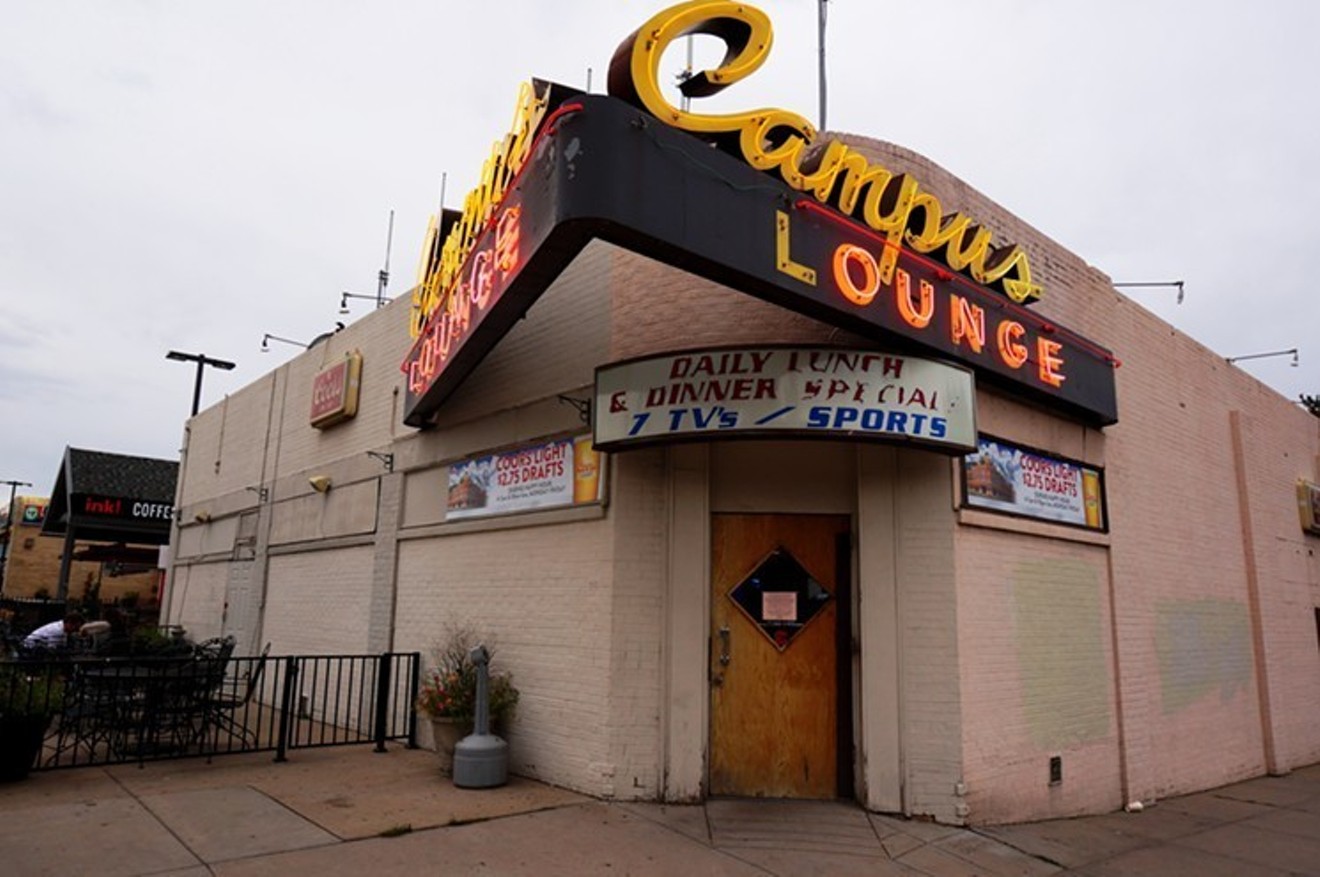 The Campus Lounge in the summer of 2016, right before Jim Wiste sold it. Mark Antonation
I discovered the Campus Lounge soon after I moved to Colorado. The dark, divey bar at 701 South University seemed like it had been holding down its corner in Bonnie Brae forever, but Jim Wiste, a former pro hockey player and graduate of the University of Denver, had only taken over the spot a year before.

The first bar to occupy the building was the Bel-Aire, which opened in 1946; three years later, it turned into the Campus Lounge. Wiste bought the place from Bill and Joe White in 1976 and proceeded to turn it into a real neighborhood hangout, with cheap beer, a cheap steak night and lots of TVs showing sporting events. Even as the neighborhood changed, with scrapeoffs of once-modest bungalows to the east and west, the Campus remained a real locals' joint.

But soon after he celebrated his fortieth anniversary of owning the bar, Wiste closed a deal in September 2016 to sell the property to a partnership that included developer Charlie Woolley and entrepreneur Dan Landes, a Denver native who'd founded City, O' City almost two decades earlier. "I'm ready to be just a customer," Wiste said, before holding a final blowout for regulars.

Woolley and Landes closed the place for what they hoped would be a quick cleanup...but months stretched into more than a year as they did a major renovation of the building, adding a new HVAC system, replacing the bathrooms, creating an expansive open kitchen, doing restoration work on the sign and "going through the headache of dealing with the city," says Landes. They were willing to put in the time and effort; they wanted to give the neighborhood a Campus Lounge that would work for decades to come, with comfy booths, great lighting and "food that was fucking good," explains Landes.

"We put a lot of love and time into this place so we could welcome them and make them feel comfortable," he adds. "That's our job." He didn't want to make the Campus Lounge another City, O' City; he knew how important it was to create a place that worked in this particular neighborhood. And so while he upgraded the taps with craft-beer offerings, he also made meat an important part of the menu.

But the neighborhood didn't bite. And after just five months, the Campus Lounge closed on March 25, and the building is now up for sale. "Failure is not fun," admits Landes. 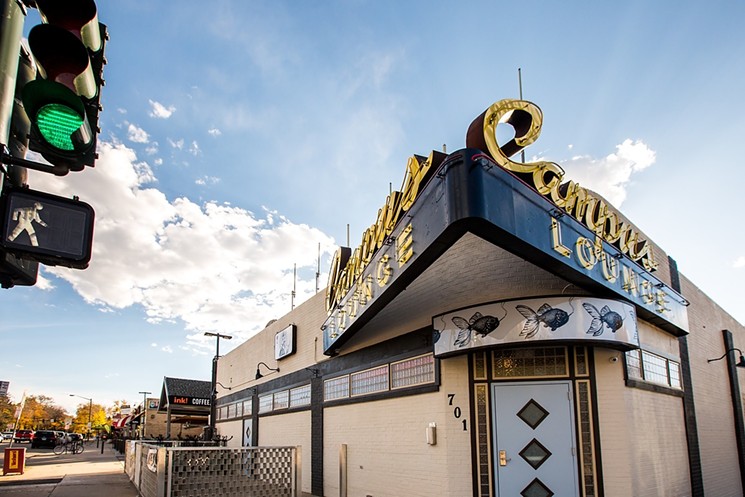 The Campus Lounge when it reopened in October 2017.
Danielle Lirette
"I executed exactly what I set out to execute: a comfortable space in a wonderful neighborhood, with a retro, divey feel," he continues. But what he thought felt welcoming and expansive, others "read as pretentious," he admits. "Denver doesn't like pretentious. That's the last thing in the world that I would ever want to be presenting."

In retrospect, "taking away TVs was read as pretentious...so that's part of it," he says. But he also thinks he wasn't sensitive enough to Wiste's legacy. "I was the second husband of a woman who'd had a wonderful relationship with her first husband. I was totally the other guy."

But Landes was sensitive enough to realize that his vision for the new Campus Lounge wasn't working soon after it opened late last October. The comments on NextDoor and other sites were "toxic," he says. "The negativity was so fast and furious," and it was exhausting for his staff. By the time Landes went to Wiste's memorial at DU's Magness Arena in January, he'd already made some shifts in the menu. By then, though, public perception was set. "No matter what we did, we were pretty much fucked," Landes acknowledges. 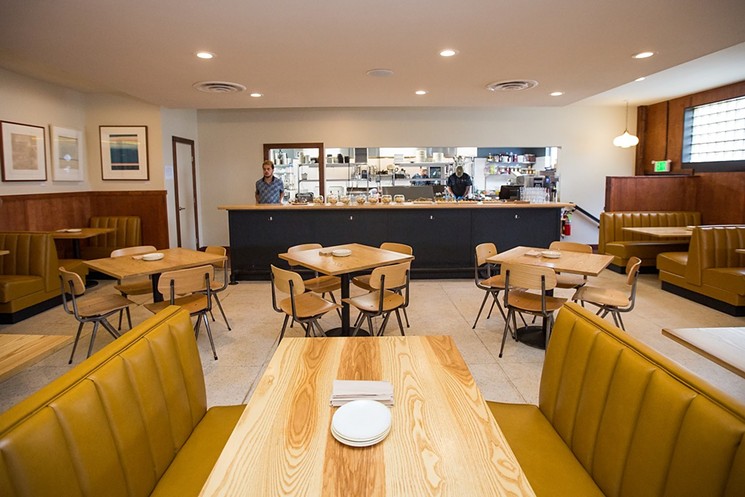 The new Campus Lounge: too bright, too pretentious?
Danielle Lirette
"There's tension in the air in Denver," he continues. "Old Denver is clinging hard to the things we can recognize, and I thought I was saving that." But the restored sign wasn't enough. People wanted their TVs, they wanted the old Campus's green chile. And they didn't want what Landes had given them instead.

He and Woolley talked about how much time it might take to turn things around. In a year, a year and a half, maybe they could make it work, make the regulars come back while still keeping the new customers who'd appreciated what they were doing. But we "simply couldn't afford it," Landes says.

And so the Campus closed, with a last party for the beleaguered staff. The entertainment included a big vat of helium, and "every staff member would hit the helium and say the shittiest thing they'd heard" about the Campus, Landes reports. One of the winners: "Do you have any real beer on tap?"

"I take responsibility, I really do," says Landes. "I put myself in the fall-guy position. The person who comes in after is the hero."

Especially if he puts Coors on tap and brings back the TVs...