Crazy Mountain will take over the Glendale World of Beer. Westword file photo
World of Beer, which opened its first Colorado location in May 2013, will close up shop over the next few weeks, shutting down its two remaining bars in Glendale and Lakewood's Belmar development. The Florida-based chain’s departure from the state creates a strong opportunity for a local company: Crazy Mountain Brewing plans to take over both spots and rebrand them as Crazy Mountain Tap Rooms in late July and August.

“As we grow and expand, we wanted to have a bigger presence in the Denver market,” says Crazy Mountain spokesman Greg Neale. “We are in a great neighborhood over here in Baker, on Kalamath Street, but it’s not always easy for people to get to. We believe these are two solid locations that will have high traffic.”

Crazy Mountain plans to retain the staff at both beer bars, but it will reduce the number of taps from fifty to around 25 and reduce the large can and bottle selection as well, Neale says. The tap rooms will offer about a dozen year-round Crazy Mountain beers, as well as one-offs from the company's Local Stash series. In addition, beer will be offered from a few other craft breweries, along with wine and spirits. For licensing reasons, Crazy Mountain won't be able to sell its beer to go, as it would if these were satellite taprooms. 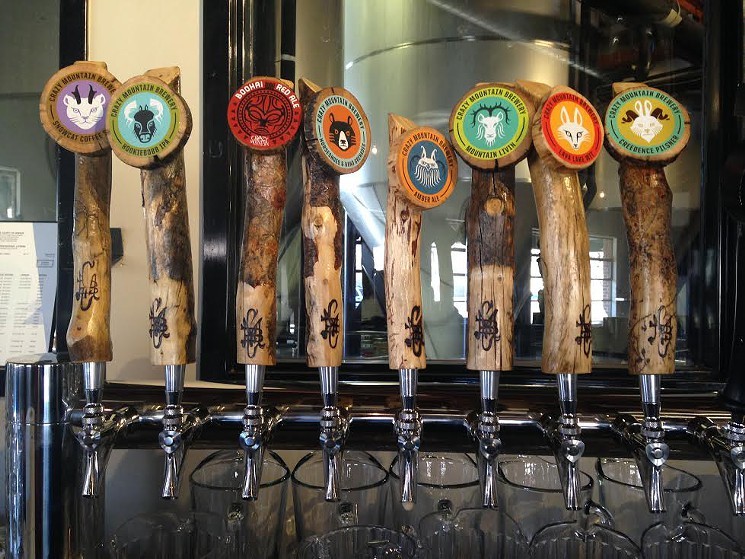 Crazy Mountain will soon fill the taps at World of Beer.
Jonathan Shikes
In addition to the two spots that Crazy Mountain is taking over, World of Beer also had locations in Boulder and LoDo. The LoDo bar closed in February 2016; the Boulder bar was evicted last December. Oskar Blues Brewery has taken over the Boulder location and plans to open its own branded taproom.

Neale says the owners of Crazy Mountain “had a good relationship” with World of Beer, which is how the new arrangement came about. “When the opportunity came up, it made a lot of sense,” he notes.

The Glendale WOB, often referred to as World of Beer Cherry Creek (despite not being in Cherry Creek) will be refurbished and should open by July 24. The Belmar spot will reopen in mid- to late August. “We are not looking to mess up a good thing,” Neale says. “We will get the staff educated on all things Crazy Mountain and get back to a good system.”

Crazy Mountain was founded in Edwards in 2010 by Kevin and Marisa Selvy. In 2015, the brewery took over the former headquarters of Breckenridge Brewery, at 471 Kalamath Street in Denver, after Breckenridge moved to Littleton (and was subsequently bought out by Anheuser Busch InBev). Since then, Crazy Mountain has looked for more outlets for its beer and also started a business contract-brewing for other companies.