Crazy Mountain Brewing Facebook page
From the outside, Crazy Mountain Brewing’s path over the past few years has seemed, well, a little crazy. Founded in 2010 in Vail Valley, it expanded rapidly by packaging and distributing beer to other states and overseas, using the recognition it had earned from tourists who’d visited. Then in 2015, the brewery took over Breckenridge Brewery’s longtime headquarters, and its equipment, at 471 Kalamath Street in Denver.

But from the inside, owner Kevin Selvy says the company is executing its goals according to a plan — and that it is poised for some serious growth in the near future.

The latest pieces to that plan are taking shape now. In mid-July, Crazy Mountain announced that it would lend its branding and beers to the former World of Beer locations in Belmar and Glendale. The two locations will look like Crazy Mountain taprooms, but are actually owned by an outside investment group. The Glendale bar opened a few weeks later; the Belmar tap room is waiting on approval from Lakewood for a change to its sign, but should open its doors in September. Both will serve primarily Crazy Mountain beers.

The second change will come in November when the brewery opens Crazy Mountain Saloon in Winter Park, offering the brewery’s beers, sausages and apres-ski dishes. Since that taproom is owned by the brewery itself, it will only pour beers brewed by Crazy Mountain (and a few outside breweries that make their beer at Crazy Mountain, using surplus capacity), and will offer beers to go as well. The taproom aesthetic will reflect that of the brewery’s taprooms in Edwards and Vail, meaning beetle-kill pine and hand-crafted furniture, tap handles and artwork.

“Branding is important,” says Selvy, who founded Crazy Mountain Brewing with his wife Marisa. “And these will be a piece of our branding strategy on a couple of levels.”

What he means is that the three new taprooms will open a lot more eyes to Crazy Mountain’s beers, so that when people go to liquor stores, they will be more likely to buy the beer there as well. That is especially true if those customers had a good experience at one of the taprooms. That strategy, of “controlling” the retail side of things, is something that regional breweries — those that make more than 15,000 barrels of beer per year — are doing more and more now as competition in the craft beer industry heats up, Selvy says.

Local examples of that include Oskar Blues, Odell Brewing, New Belgium and Denver Beer Company, which have all added, or are currently adding new locations. 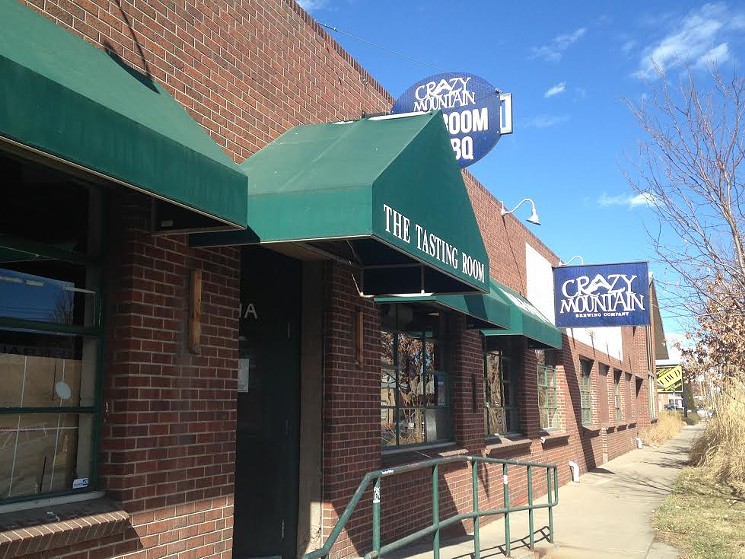 Westword file photo
For Crazy Mountain, the added tap handles also give the company a way to guarantee more beer sales, which is important because it has a very large brewery with more capacity than most other craft beer makers. Crazy Mountain will brew about 43,000 barrels of beer in 2017, making the second largest brewery in Denver, but the brewhouse, which Crazy Mountain inherited from Breckenridge, is only operating at 50 percent capacity.

But Selvy also wants to expand his company’s position as “a core mountain brand” with a bigger presence in ski towns. So, the Winter Park location could be just the beginning, he explains. Intrawest, the company that runs Winter park for the City of Denver — and leased the space to Crazy Mountain — also runs resorts in Vermont, West Virginia and Canada, not to mention Steamboat Springs here in Colorado.

Negotiations with Intrawest began last year. The talks with World of Beer, meanwhile, started in January as the Florida-based beer bar chain began to struggle in Colorado. WoB had been the first chain restaurant to agree to sell Crazy Mountain Beer four years ago, so Selvy says he had a good relationship with the company. “The timing was right, and the locations were right,” he adds.

“Since 2010, the rules of running a craft brewery have changed in Colorado and everywhere. They’ve changed a lot,” Selvy says. For Crazy Mountain, which has grown by triple digits for each of the past several years, there are more opportunities in the future. And although the company didn’t add any new territory outside of Colorado in 2016, it plans to “open up” six new states this year by distributing beer there.

“Colorado is our top priority,” adds Crazy Mountain spokesman Greg Neale, who points out that supermarkets, for instance, will be given more freedoms in 2019 to begin selling full-strength beer in Colorado, which could be a “big opportunity for a brand like ours.”

In addition to the five Colorado locations, Crazy Mountain also shares a spot with a restaurant in Chicago and briefly served as the house beer at La Guera in Denver. In the future, though, the company may look to expand partnerships like that.