Mel Hill
Mention of the Colorado Wine Governor’s Cup Competition would once have drawn blank stares: What? Wine in Colorado? That’s beer country.

But times have changed. On August 3, the 2017 Governor's Cup Competition drew hundreds of wine enthusiasts to the History Colorado Center, where they tried past winners as well as the twelve competing Colorado wines along with food pairings by area chefs. Colorado’s post-Prohibition wine production is relatively new, having restarted in the late 1970s, and is still relatively small, accounting for only 2 percent of Colorado wine sales by volume. But the industry is rapidly growing, both in the number of wineries and the variety and quality of the wines.

I started with Colorado Cider Company’s Grasshop-Ah hard cider. Redolent of lemongrass and crisp autumn apples, it worked well with the salad provided by Sazza...but I’d pair it with a hot summer day and tortilla chips.
Whitewater Hill Vineyards had produced a sangria-like wine made of black muscat grapes called Sweetheart Red. The wine smelled like roses and tasted like grape jam; it was great with a salty pairing. Two Rivers Winery’s port was superb with a mouthful of dark chocolate from The Chocolate Therapist, my kind of shrink on Littleton's Main Street. The Winery at Holy Cross Abbey, once operated by monks, made a delicious merlot. Lacking the tannins that give some merlots the texture of silt, this one was smooth. Coming off my second helping of tuna sashimi from Mizu, I hit the seafood bacon pairing with reluctance, and found the merlot a perfect fit. It was light enough for pork or seafood, but would pair well with beef, too.

Sampling wines at the Governor's Cup.
Mel Hill
Talon Winery's name was inspired by a love of falconry, and its strawberry honey mead really flew. It was paired with strawberry shortcake in a combo that was a little sweet for my taste; I’d have mixed the dessert with the bone-dry 2013 Bubble Universe Sparkling Albariño from Infinite Monkey Theorem. The sparkling wine was effervescent, with a bracing tonic-like bouquet and taste that reminded me of mineral water. The 2013 vintage had sold out, so we were drinking the private reserve, which was delicious.

Initially I'd spurned the Spiced Nektar Mead by Colorado Cellars, since the thought of peach wine gave me ’80s wine-cooler flashbacks, but the smoked salmon and pickled peach pairing beckoned. And as it turned out, the peach wine was my favorite of the evening. I had to taste it a couple of times to be sure. It was dangerously good, especially because you couldn't taste the alcohol. I wanted to have it with breakfast — maybe for breakfast. 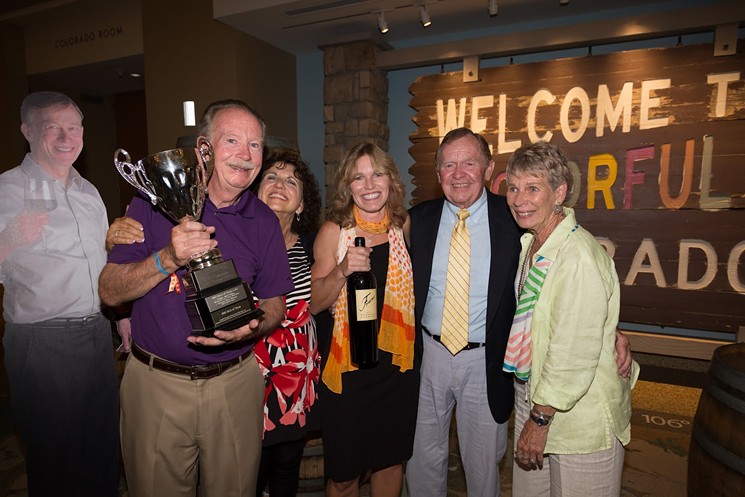 Governor Hickenlooper (in absentia) celebrated the winner: Evergreen's Creekside Cellars.
Mel Hill
So when Doug Caskey, executive director of the Colorado Wine Board, announced the winner of the 2017 Governor’s Cup, I was rooting for the Spiced Nektar Mead. But as a past winner, it wasn’t even competing this year.

Instead, Creekside Cellars took the cup with its 2014 Cabernet Franc. It had a biting bouquet, like hard alcohol, with a smooth finish that proved addictive. I wanted a medium-rare steak to go with it, and kept looking for one through the bottom of the glass.

I'll know to pace myself better next year.  After all, Colorado's wine industry is coming of age.