DeSteeg Brewing Has Been Sold; New Owners Will Make Changes DeSteeg's entrance is in the back. DeSteeg Brewing
Craig Rothgery, who founded tiny DeSteeg Brewing in 2013 in an alley off of North Tennyson Street, has sold the operation to a pair of Denverites who had always wanted to open a brewery.

Longtime friends Ken Klispie and Tom Martinez bought DeSteeg on October 1. They plan to ramp up production of DeSteeg’s experimental beers and to add a second brand, called Blind Faith Brewing, which they hope to distribute to bars and restaurants around town, along with DeSteeg's beers. Blind Faith will focus on the Belgian monastic, or Trappist, brewing tradition of making dubbels, tripels and quads.

The name is partially a nod to Martinez, who worked in inventory management for Coors Distribution Company for twelve years before suffering health problems in late 2016 that resulted in him losing his sight; because he is now blind, the brewery will be retrofitted so that he can work in both the taproom and the brewhouse. The name also honors their religious faith, which forms the basis for their friendship, Klispie says.

“We are both beer geeks, love the craft, and we love creating beers. Tom is a level-two Cicerone and a beer judge. He has a great palate, and he likes to focus on execution and the process of of being able to repeat a recipe over and over — consistency and quality,” Klispie says. “For me, I’m more similar to Craig [Rothgery] because I like to brew different things and experimentation.” 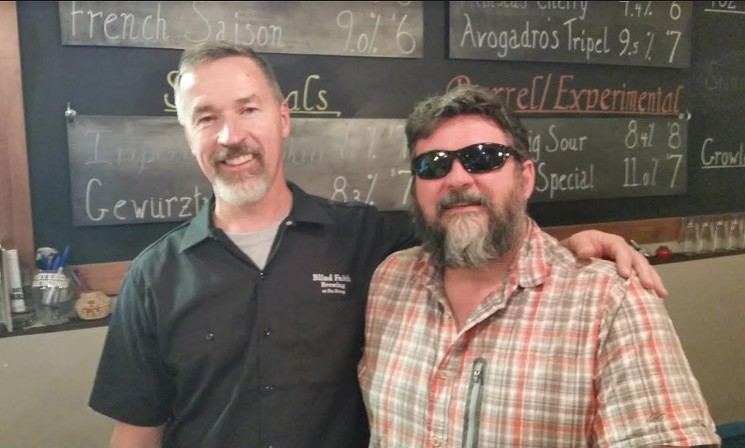 Ken Klispie (left) and Tom Martinez now own DeSteeg Brewing.
Eventually, Klispie and Martinez would like to find a second location where they can expand on the Blind Faith concept while keeping DeSteeg as is.

DeSteeg (which means “the alley" in Dutch) was one of Denver’s most unusual breweries when it opened four and a half years ago because of its hidden entrance in the alley off of 44th Avenue and Tennyson Street; it didn’t even put its name on the sign. With room for only 33 people inside and a tiny 1.5-barrel brewing system, the brewery truly fit the designation of nano-brewer.

Klispie acknowledges the small size and the lack of a streetfront and parking — not to mention endless construction in the area — but he says locals know it is there and that he is planning to begin marketing the brewery more, focusing on distribution in particular.

DeSteeg is part of a small wave of breweries that have been sold in Colorado in recent months. Earlier this week, North Carolina's Thirsty Monk bought Deep Draft Brewing in Denver. Several other breweries in Boulder, Parker, Fort Collins and Dillon have also changed hands.