Strawberry cream French toast is available in a "slider" portion, in case you want to mix and match. Mark Antonation
Joseph Strelnik was the baron of breakfast for nearly six years as the executive chef at Snooze, Colorado's favorite stop for a morning meal. But now he has teamed up with John "JD" Daniel to start his own breakfast revolution and is nearly ready to open Morning Collective at 2160 South Broadway, in the Rosedale neighborhood.

Strelnik and Daniel took over a space, located between Taste of Thailand to the north and the Post Chicken & Beer to the south, that had been slated to become a Philly cheesesteak and barbecue joint before that deal fell through. Instead, April will see the two unveil a breakfast eatery that will be open daily from 6:30 a.m to 2:30 p.m. The specialty of the house will be stuffed French toast and pancakes with molten centers that Strelnik calls "Daily Breads," with combinations like stuffed s'mores, pistachio tres leches, banana hazelnut and strawberry cheesecake, as well as rotating seasonal specials. "Breakfast is the only meal where it's acceptable to have something dessert-like as a meal," the chef notes, but he also adds that he uses the natural acidity of fruits to lighten dishes so guests don't feel bogged down for the rest of the day. 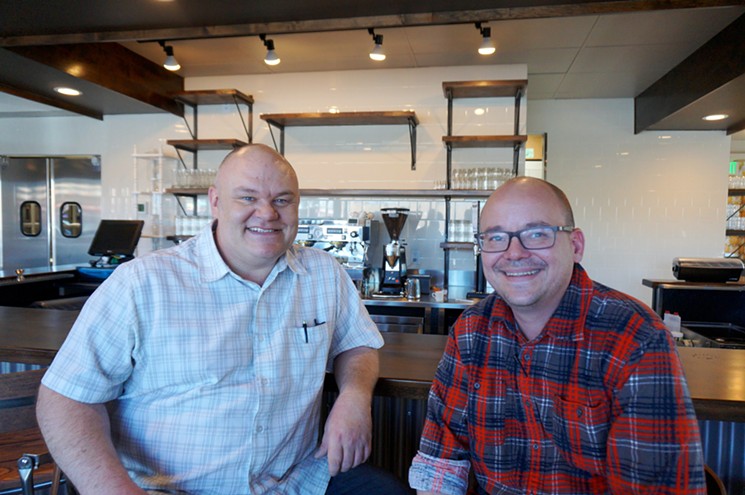 JD Daniel (left) and Joseph Strelnik are ready to welcome neighbors to Morning Collective.
Mark Antonation
There will be far more than just the sweet stuff, though, as Strelnik's menu will cater to many different tastes and needs, from the traditional bacon-and-eggs crowd to those who want smaller, more frequent meals. And many of the big dishes will be available in half orders or single servings, including the pancakes, French toast and Benedicts. "It's your breakfast, so you should get what you want," says Daniel, a front-of-house specialist with years of experience at Snooze (most recently opening new Snooze locations in Arizona and California) and Govnr's Park Restaurant & Bar before that.

As far as those Benedicts go, there will be classics as well as unusual elements like a green-pea fritter subbing in for bread on the base of one version and another stacked high with tater tots and bacon. But there will also be breakfast bowls for those looking for something healthy and easy to grab on the run. Those folks will also be attracted to the "Crave and Behave" and "Second Breakfast" sections of the menu; the first comprises lighter dishes that weigh in at about 300 calories each, while the second is perfect for those who want to stop in for a bite and then take something to go for a little later in the day. Morning Collective will also serve several lunchtime sandwiches and salads.
click to enlarge 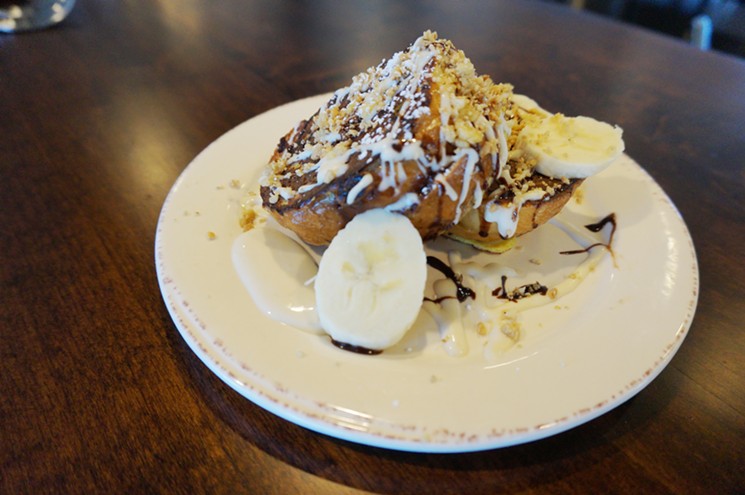 Banana-Nutella-hazelnut French toast.
Mark Antonation
A breakfast joint in Colorado wouldn't be complete without a bar to serve weekend brunchers (even if your weekend is on a Tuesday or Wednesday). Guests will be able to start their day with "Sunrise Elixirs" made with local spirits (booze-free elixirs are also part of the program) or choose from Denver beers and wines like Black Project and Infinite Monkey Theorem. To keep drinks from getting watery, a variety of flavored ice cubes, including horchata, wildflower, beet, strawberry, coffee and even bacon will be available. "Drinks are like fifteen bucks nowadays," Strelnik explains, "so it's nice if your drink can evolve a little instead of devolve."

Morning Collective encompasses 2,500 square feet decked out by Xan Creative, with mid-century wallpaper (that was actually printed in the 1950s), avocado-green booths and other retro and rustic touches. "This used to be a 7-11, and it's kind of cool to keep some of those elements," Strelnik points out.

Outside, a patio in the front will serve as a waiting area during pleasant weather where guests can sip cocktails or coffee, while a second patio on the side will provide additional seating.

Investors Rod Hurlbut and Zach Stock are providing financial backing to make sure Morning Collective gets off to a good start. Hurlbut says they're planning to open a total of three of the breakfast restaurants in the metro area in the next 24 months. "What really convinced me is that Joe is such a creative cook, but he also understands the financial side of running restaurants," he adds. 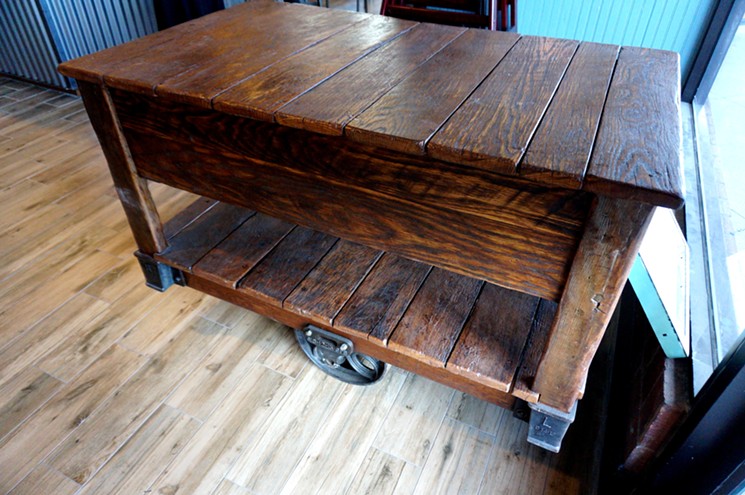 The host station is built from 100-year-old wood and railway hardware.
Mark Antonation
Strelnik's creative side comes from years of working in fine dining in Europe and New York City when he was younger, often working for nothing more than meals and drinks to master a specific station or learn a new skill. That creativity is evident on a menu overflowing with flavored froths whipped up in Isi canisters to give cold drinks the same texture and aroma as a latte; those flavor-packed ice cubes; and flourishes on the plate like a strawberry-graham-cracker dust atop French toast. But he also wants to respect his humble roots, when his parents cooked meals for the family every day and going out to dinner was a rare treat. He explains that he wants his restaurant to be a place where his parents would feel comfortable.

The name Morning Collective comes from the team's concept that guests, employees and neighbors are all part of the same group with the same goals. "We're all together — we're here and can enjoy food together, enjoy working together, enjoy being neighbors," Strelnik notes. "And we put a lot of effort into training and education and mentoring, because when you sit down for breakfast, you want someone who's genuinely happy to help you."

Morning Collective is awaiting final liquor-license approval but expects to open the first week of April, bringing a creative new eatery to South Broadway and the nearby Rosedale and Overland neighborhoods. The Electric Dreamsicle is made with vodka, orange juice and vanilla froth.
Mark Antonation